“The steady drip, drip, drip about Hillary Clinton’s too-cozy relationships with big-time donors to the Clinton Foundation while she was secretary of state continued unabated this week.” Thus starts a Boston Herald editorial.

I wouldn't have minded if Hillary essentially blew off the job of SecState in favor of the doing her own thing; I'm sure the perennial bureaucracy at State would have continued the work, probably even better than with her at the wheel (it wasn't that high a bar), but the fact that she used it for personal gain is inexcusable.


In the end, whether these people received any direct favors may prove nearly impossible to establish, but that’s not really the question. It would be a foolish politician indeed who would ever draw up a document saying that if you give millions to their family’s foundation they’ll do you this or that favor using the power of their office. The Clintons may be many things, but they’re not that stupid or they’d never have risen as high as they have. There’s also a standing defense available to them by simply saying that the favorable action was one which they were already considering anyway and they’d have done it with or without some particular meeting or donation.

But when it comes to earning the trust of the American voters, such verbal gymnastics aren’t really where we draw the line. Don’t come around peeing on our legs and then tell us it’s raining. Influence peddling is much like the old Supreme Court definition of pornography when it comes to this discussion. We know it when we see it.


Adam Davidson, who hosts a show for NPR and has written for New York Magazine, also said during an appearance on Slate’s “Political Gabfest” podcast, that the Bill and Hillary Clinton-controlled group’s events are “all about buying access.”

And later in the podcast, he said that the Clinton Foundation has made the Clintons “beholden to scumbags.”

And the government is determined to ram her down our throats before the truth comes out: Remainder of Clinton Calendars Will Not Be Released Until After Election.  I wonder what's in them. Watchdogs warn of 'serious' conflicts of interest for Clinton Foundation. Seven ways the Clinton Foundation failed to meet its transparency promises:


Step back from the endless news of Clinton Foundation/Clinton State Department sleaze and Clinton email abuse, and shake your head at this: Hillary Clinton still believes she did absolutely nothing wrong.

That jaw-dropper surfaced in Annie Karni’s report for Politico on the campaign’s damage-control efforts on the candidate’s scandals: Hillary’s minions plan to just “ride out” the clock to Election Day — “a strategy born … of a belief held deeply by Clinton herself that the email controversy is a fake scandal.” 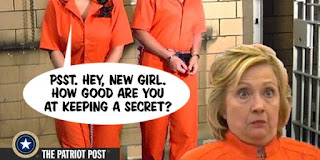 But Hillary Clinton BleachBits her past. Shows knowledge of guilt. Prosecutors want until Sept. 19 to decide whether to retry McDonnell So what does this have to do with Hillary? Simple, the McDonnell prosecution was based on a rather expansive view of quid pro quo which could easily be extended to cover Clinton's work with the Foundation as SecState. Orange is Hillary Clinton’s color. Clinton campaign finds legal loophole to collect big donations. Getting big money out of elections is for suckers, or Republicans. Great news: “Extremely careless” ex-gov’t official arrives to view highly classified intel. What's the worse that could happen, that already hasn't?

After Hillary's speech condemn Trump for being supported by the KKK, KKKK Grand Dragon Endorses Hillary Clinton. Even Grand Dragons can have a sense of humor. Ann Althouse asks Did the Alt-Right play its big day right? How can you know; no one even seems to know who the Alt right are; just more straw men? Sorry, Hillary: Trump’s policies are clearly better for blacks. It's not that high a bar. Clinton faces decision in Trump attack strategy. Trying to find the right lie.


Clinton herself says she's "chronically exhausted". Her staff calls her a "champion napper".

And then there's her email about the symptoms of “decision fatigue.” Another about Provigil, a drug “often prescribed to treat excessive sleepiness in patients with Parkinson's, Alzheimer's, and multiple sclerosis."

There's nothing quite like rigging the economy to favor your candidate: Barney Frank to Fed: Don’t raise rates before election. If that doesn't work, there's always prayer: For Hillary Clinton and Democrats, a Public Shift Toward ‘God-Talk’.  Hillary slide? Reuters poll shows Trump back within five.

Continued attention the Huma Abedin's links to Muslim extremism: Bill Clinton bombed Saddam to distract from the Monica Lewinsky scandal - what Huma Abedin's Muslim journal claimed about her boss's husband Analysis; probably true. Huma Abedin’s mom linked to shocking anti-women book, But, but but, the Washington Post claims mama Abedin is a moderate Muslim. You know, the kind that wants the extremist Muslims to kill you, instead of having to do it herself. Related: Immigration Expert: U.S. to Resettle Nearly One Million Muslim Migrants Under One Term of Clinton Presidency.