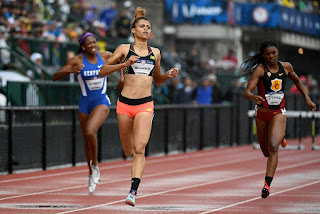 Not much of a day for the US at the Olympics. 17 Year old New Jersey native Sydney McLaughlin placed 5th in the semi-finals of the 400-meter hurdles. An odd sport, for sure. Hopefully she'll be back as a more mature 21 year old in the 2020 Tokyo Olympics.

There was a touching moment of sportsmanship when American Abbey D'Agostino and New Zealander Nikki Hamblin crossed legs on a 5,000 meter qualifying run. After picking herself up, D'Agonstino helped Hamblin to her feet: 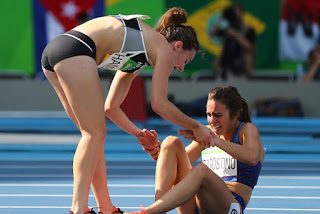 "Get up. We have to finish this," then hoisted her to her feet to restart the run.

Turned out, D'Agostino took the worst of it, hobbled because she had hurt her ankle. So, when Hamblin got to the finish, she waited for her new friend, where they exchanged a warm hug before the American got carted off in a wheelchair.

Judges advanced them both to the finals without comment.

And of course, the news would not be complete without word that the American Women's Beach Volleyball team, Kerri Walsh-Jennings and April Ross, were defeated in the semi-finals by the clearly superior (at least yesterday) Brazilian team of Agatha Bednarczuk and Barbara Seixas in straight sets. But it was a hell of a match, with many great digs and tough rallies. Senior member of the team Kerri Walsh Jennings puts blame for Olympic semifinal loss on herself. 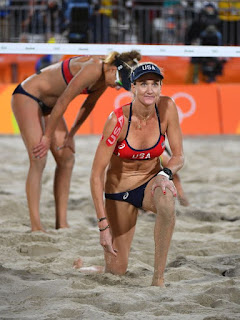 Kerri and April will contend with the other Brazilian team, Larissa França and Talita Antunes for the bronze today at 9 PM, while Agatha and Barbara will play Germany for the Gold at 11. As for men's beach volleyball, who cares? 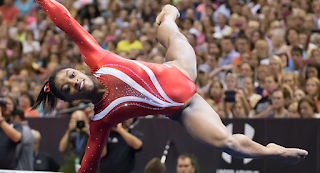 But the one really bright spot in yesterday's contests was  Simone Biles crushing her competition, including her teammate Aly Raisman (who won Silver) in the floor exercises, for her fourth Gold of the olympics. They're already starting to talk about her as the best women's gymnast ever. Who am I to judge?