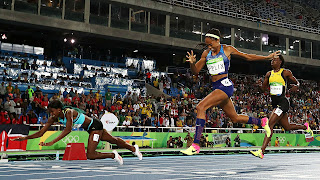 Yesterday was not a great day for America at the Olympics. For the first thing, it was a day off for the remaining Women's Beach Volleyball team. Then there was Allyson Felix, widely expected to get the Gold in the Women's 400 m only to be beaten by a last second, extremely painful looking lunge by the Bahama's Shaunae Miller, yielding her a 0.07 sec. victory.

I guess at the price of gold, it's worth the road rash.

Olympian Allyson Felix: 25 Things You Don't Know About Me

And then there was Simone Biles, for whom the expectations of a Gold on the balance beam ran ahead of the facts. She had a bad bobble, and was forced to grab the beam or fall, and came in third after Sanne Wevers of the Netherlands and her own teammate, Laurie Hernandez.


But bad news did not fall on the Americans alone. Bronze Medal winner Fu Yuanhui of China blamed her teams 4th place finish on her period in the 4x100m medley relay, and was rewarded with praise from the home crowd: 'It's because I had my period': swimmer Fu Yuanhui praised for breaking taboo 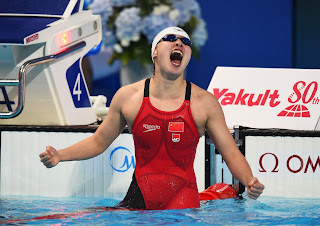 “I don’t think I performed very well today. I feel I let my teammates down,” a visibly pained Fu told state-broadcaster CCTV in a brief poolside conversation following the race.

Asked whether she was suffering from stomach pains, the 20-year-old swimmer said her period had started the previous day. “It’s because my period came yesterday, so I felt particularly tired – but this isn’t an excuse, I still didn’t swim well enough,” she said.

Chinese sports fans used social media to praise Fu for breaking the silence surrounding the menstrual cycles of female athletes. Many said they had not realised it was possible for a woman to swim during her period. “Our Ms Fu dares to say anything,” wrote one user of Weibo, China’s Twitter.


When Michael Phelps failed to win his last individual race, the 100m butterfly, he didn't tell us about his substandard sleep last night or a recent unsatisfying bowel movement. He said to talk to the guy who won and "I’m happy right now" and other conventional good-sport remarks.

Wombat-socho's "Rule 5 Sunday: Post-Olympics Edition" is open for business at The Other McCain.
Posted by Fritz at 4:50 PM