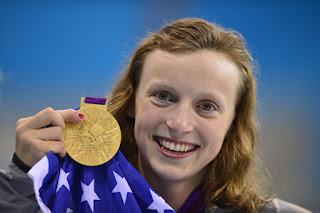 I watched this race last night  and it was amazing to see how she beat the other competitors: Katie Ledecky dominates to win 400 freestyle in record fashion

. . .for those who watch world-class swimming only on a four-year cycle, the 19-year-old from Bethesda offered a Sunday revelation in her first individual final of these 2016 Olympics.

Ledecky left the rest of the field far in her wake in the 400-meter freestyle, winning her second of an expected five medals at these Games and shattering her own world record in the process.

She clocked in at 3:56.46, beating Great Britain's Jazmin Carlin and American Leah Smith by roughly five seconds apiece for the top spot on the medal stand. 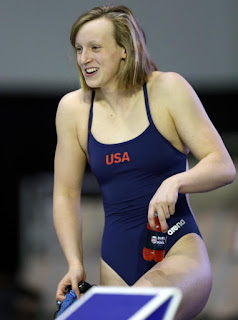 Going into Sunday night's final, she owned 9 of the 10 best times in history in the 400 freestyle and the 10 best times ever in the 800 freestyle. More recently, she's become the best in the world at 200 meters. And as she demonstrated in her silver-medal relay swims on the first day of competition here, the 100 meters might be her next horizon to conquer.

No swimmer has ever been so good across such a range of distances.

Wombat-socho has a plain vanilla "Rule 5 Sunday" and "FMJRA 2.0: Operation Chromite" ready at The Other McCain.
Posted by Fritz at 8:07 PM