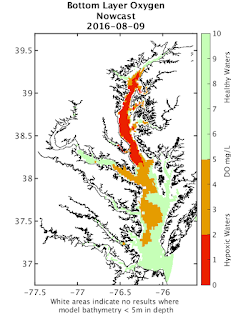 Predicting the general outline and seasonality of dead zones is fairly straightforward — a large pool of oxygen-poor water typically occupies the deeper parts of the Bay’s main channel during the summer doldrums, when hot weather drives gases from the water and encourages algal growth, while calm winds minimize the waves and currents that would otherwise help mix relatively oxygen-rich surface waters into the depths. 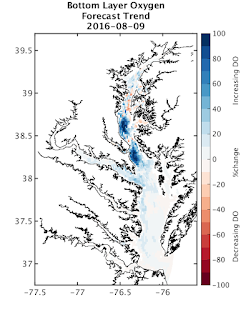 The prediction page is given here. The current conditions are given in the first of three panels (today's shown above), with the second showing the 4 day prediction, and the third (shown at the right) the forecast trend.


But predicting day-to-day changes in the size and shape of the Bay’s dead zone is more of a challenge — and exactly where VIMS’ forecast will add value to anglers searching for striped bass and other cool-water species. When oxygen declines in the deeper, cooler waters these fishes prefer, they are forced from their habitual haunts into areas where anglers might not think to look.

Right now, the site show hypoxic bottom water hugging the coast near us. I believe that, as I have seen the crabs in shallow water. It forecasts an increase in the bottom water oxygen in the next few days, which suggests better fishing may be on the way.


Professor Marjy Friedrichs, who leads development of VIMS’ daily dead-zone forecasts, says “We held a stakeholders meeting this spring to better understand how charter boat captains and others on the Bay might use our modeling capabilities, and what kinds of forecasts would be most useful. They were enthusiastic about a short-term dead-zone forecast and said they could use it to help plan where they’re going to fish.”