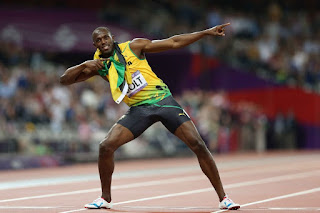 But first, some actual news and some Rule 5 for the ladies. Usain Bolt of Jamaica upheld his title as the fastest man in the world by running 100 yards in 9.81 seconds. Way to go, man! I mean that literally.

I watched just enough duet synchronized swimming to see that the US team of Anita Alvarez and Mariya Koroleva don't have a chance against the Russian duo Natalia Ishchenko and Svetlana Romashina. Indeed, after the first performance they are  9th place.

Maybe we can get them tossed out of the competition for using Meldronium. 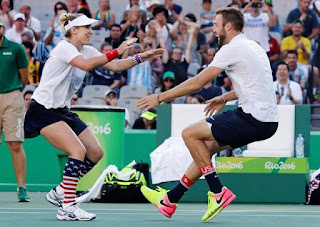 Next off to mixed doubles tennis, where the US's Jack Sock and Bethanie Mattek-Sand took Gold away from Venus Williams and Rajeev Ram  7-6, 1-6, (10-7) also from the US. Speaking of socks:


Venus Williams did not divulge where she will store her fifth Olympic tennis medal. We do know where those stars-and-stripes socks worn by Bethanie Mattek-Sands are going, though.

“Definitely, the socks will get retired and put in a frame,” Mattek-Sands said. 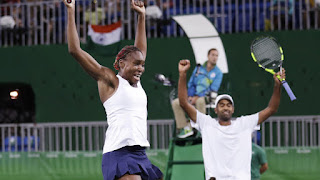 Venus Williams was ill before leaving for Rio de Janeiro, and she was upset in the first round of both singles and doubles. She and Ram had a series of tight matches leading up to the final.

“It's been an amazing experience, five Olympics for me,” she said. “It's surreal that I even came out with any hardware at all.”

Sadly, women's beach volley ball is slowly coming to a close, with the Brazilian team of Larissa Franca and Talita Antunes sneaking past Switzerland’s younger team, Nadine Zumkehr and Joana Heidrich, 21-23, 27-25, 15-13 in yesterday's quarter finals. Based on what I saw yesterday, Joana Heidrich has the potential of becoming a Kerri Walsh-Jennings style dominant player.

The semi-finals are to be played tomorrow, with one Brazilian team facing Germany in the afternoon, and another (Larissa/Talita) facing the United States in the evening. 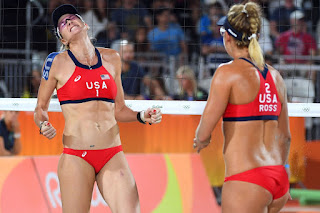 
“The athletes are allowed to wear long sleeves, they’re allowed to wear shorts, tank tops,” Calabro said. “But we’ve gotten a lot of athletes on record saying they prefer to wear a two-piece because there are less places for sand to hide. They don’t view it as swim wear or anything like a fashion statement. For them, that’s their uniform.”

Kerri Walsh Jennings has been especially vocal about their decision to compete in two-pieces. She told The Huffington Post:


“When it comes to beach volleyball, we’re playing in 100-degree-plus weather. I think we’ve just gotta educate the public, take it with a grain of salt and make sure that we’re working hard and not playing up the sex appeal because it’s inherent anyway.” 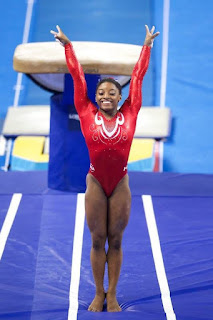 In the vault final, gymnasts vault twice and the scores are averaged. Biles scored 15.900 on her first -- an Amanar -- with a short hop back. She spoke briefly with her personal coach, Aimee Boorman, between vaults and came back with an even better showing on her second one, the Cheng, and scored 16.033.

Biles is the first U.S. woman to win the Olympics on vault and the first to win three Olympic golds in a single Games in gymnastics. 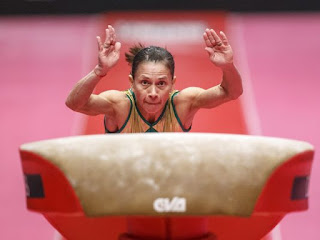 I was more impressed by the 41 year old Ukrainian vaulter Oksana Aleksandrovna Chusovitina who competed, not because she did it so well, but that she could do it at all. When asked why she did, she said it's because no one makes her.

Wombat-socho's "Rule 5 Sunday: Post-Olympics Edition" is open for business at The Other McCain.
Posted by Fritz at 2:24 PM