Some Sunday News from Clinton.com

Rand Paul is trying to relitigate Benghazi: CIA Annex In Benghazi Shipped Arms From Libya To Syria; Clinton Lied About It:


It’s a felony to lie to Congress. You can get five years in prison. And we can’t continue to say the Clintons are above the law. I do believe that the CIA annex in Benghazi was procuring weapons, some of them to get them away from the jihadists in Libya. But some of it to ferry those weapons through Turkey, into Syria.

There have been many, many first hand accounts, The New York Times, London Times, Washington Times have all reported on this… I find it hard to believe that Hillary Clinton, who all the news report have said she was the biggest advocate for arming the Islamic rebels in Syria, many of them turned out to be not only enemies of ours, some of them also turned out to be enemies of Israel.

Clinton crony and former Secretary of Defense Leon Panetta ask us to just "move on" from Hillary's email violations.


But even if he weren’t so tied up in the affairs of Clinton Incorporated, his comments this morning reflect a particularly sad state of affairs for politics today. The pay for play going on with the Clinton Foundation is, by this point, too obvious to ignore. Add to that the established fact that Hillary Clinton lied to the nation when she said she had turned over all of her relevant emails before wiping her server. These facts alone should go well beyond the point of disqualifying someone for office, but as Panetta described it during the interview, it’s just politics.

No doubt he'll be happy that Guccifer 2.0 is no longer welcome on Twitter. He broke the cardinal unwritten rule, no violations of the terms of service that hurt democrats. This, of course, doesn't mean Guccifer 2.0 is out of business: Leftist Billionaire George Soros Group Hacked – Thousands Of Pages Released, which accused him of fomenting violence around the world. Meanwhile Hillary Clinton Running Mate Tim Kaine Dines with George Soros’ Son.

But Hillary is going to save us from the "glabalists", right? Well, Althouse notes: Hillary's hedge on TPP is right there in plain sight: if it "kills jobs or holds down wages" (her italics):


She didn't say she'd stop TPP. She said she has a pre-condition. All she needs to do, once elected, is assert that it doesn't kill jobs or hold down wages. Trade deals, when accepted, are always portrayed as good for us. The condition will always be said to have been met if you ask someone who is accepting the deal, so it's meaningless to announce that you have that condition. But to NPR, it's "Clinton's strongest language yet." That may be literally true, but it's still meaningless. 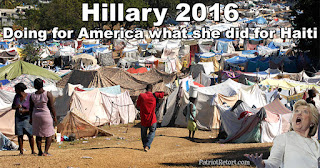 Doing for America what she did for Haiti

The most devastating earthquake in the region. Thousands dead. Many more thousands homeless.

The Clinton Foundation went in there and found a way to get fabulously rich off of the tragedy. Not only for themselves, but for their wealthy donors.

Did Hillary “produce results for the people” of Haiti?

No. She just profited off of their misery.

Who in his right mind would believe that this greedy, corrupt, opportunistic hag is going to do better as President?

Clinton’s Tale of Two Trumps: Typical Republican and Dangerous Menace - The Democratic presidential nominee’s narrative about her Republican rival is nuanced, if not contradictory.

The contradiction is easily resolved. Each republican candidate is Hitler incarnate until he loses, at which point he becomes the font of reason, and the shining example for all future Republican candidates. See McCain and Romney.

More insight into the Clinton's plan for education:  Bill and Hillary Clinton’s ties to for profit colleges under renewed scrutiny. "Free", taxpayer funded education tuition goes to Clinton's friends in education, who pay them for speaking to them. Nobody loses except the taxpayers, and the students whose education will be devalued as a result. Speaking of speaking, Bill is so good music starts playing to get him off stage.

Remember the other day how I said it's likely that Anthony Abedin Weiner is up to his old tricks, because an addiction is so hard to beat? Anthony Weiner caught in new flirty online chat. But now "Carlos Danger" has morphed into a randy mongoose.
Posted by Fritz at 6:29 PM