It takes about a week for the Obamacare Schadenfreude digital bank to fill up to the point it needs to be emptied, and Monday seems to be a good day since the amount on new material on Clinton.com seems to slack off on Sunday.

So it seems we were right: Princeton health economist: We’re now seeing a ‘mild version’ of the Obamacare death spiral:


SK: So what happens in a system like this? Does it eventually right itself, or does it fall apart?

UR: Liberals think this will settle itself. Eventually, though, we all know about the death spiral that actuaries worry about, and I think what you’re seeing now is a mild version of that. These things accelerate, as premiums keep rising.

We’ve had two actual death spirals: in New Jersey and in New York. New Jersey passed a law that had community rating but no mandate, so that market shrank quickly and premiums were off the wall. You look at New York and the same thing happened; they had premiums above $6,000 per month. The death spiral killed those markets.

What we do have in the Affordable Care Act is the mandate, so it will be a slower process. If the premium increases go through for 2017, some are 8 or 9 percent, and that is stiff. If those rates get improved, those are big enough that a lot of people will drop out.

Yeah, but he's Ivy League. Since things are always bigger in Texas: Texas A & M professor: ‘We may be beginning to see the death spiral…’


Insurance start-up Oscar announced on Tuesday it would partially withdraw from the Texas market, joining veteran health plans Aetna, UnitedHealthcare and Scott and White on the list of companies that recently announced they would abandon the marketplace created by President Obama’s signature health law. The companies said their costs of providing coverage to middle-income Texans have been unsustainable, fueling concerns about a lack of competition and consumer choice within the health insurance market next year.
. . .
“I think what we should be expecting is premiums that are substantially higher, and I think there’s a real risk that other insurers pull out,” said Michael Morrisey, a professor at the Texas A&M University School of Public Health. “We may be beginning to see the death spiral of insurance plans in the exchanges.”


“I would characterize the exchange market in Tennessee as very near collapse … and that all of our efforts are really focused on making sure we have as many writers in the areas as possible, knowing that might be one. I’m doing everything I can to prevent a situation where that turns to zero,” [Insurance Commissioner Julie Mix] McPeak said to The Tennessean.

Illinois Obamacare rates could soar as state submits insurance premium increases of 43 percent to 55 percent to feds. But at least they can sleep comfortably at night knowing that they voted for it. Obamacare sticker shock hits key Senate races. Somebody must pay! Democrats one hope?


“This may be the first election in a while where Obamacare won’t have a big role, if any, in these Senate races,” said former Harry Reid aide Jim Manley, a director at QGA Public Affairs. Any attacks about Obamacare, he said, are “going to be drowned out by the clown show that’s the Trump campaign.


Remember Nasty Pelosi admonishing America that "we have to pass it [ObamaCare] to see what was in it?"

Remember being told ad nauseum how ObamaCare was going to increase competition and decrease premiums?

- ObamaCare has accomplished the polar opposite of what was promised...it has decreased competition and increased premiums.

When will Americans get tired of being treated like mugs and played for suckers?


From the mystery men at Zero Hedge:  How Obamacare Destroyed The Middle Class In One Chart 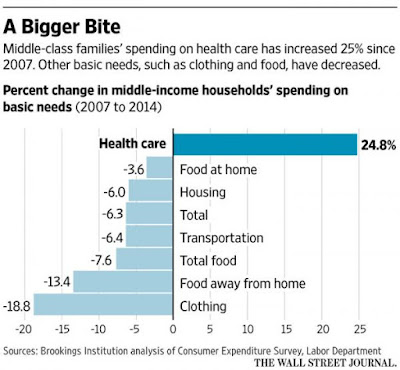 Health care is rapidly eating away all other uses for money.


Enrollment in the insurance exchanges for President Obama’s signature health-care law is at less than half the initial forecast, pushing several major insurance companies to stop offering health plans in certain markets because of significant financial losses.

As a result, the administration’s promise of a menu of health-plan choices has been replaced by a grim, though preliminary, forecast: Next year, more than 1 in 4 counties are at risk of having a single insurer on its exchange, said Cynthia Cox, who studies health reform for the Kaiser Family Foundation.

Health insurance so good that they can't even force people to take it. Even Obama's website has quietly dropped its promise that you can Keep Your Doctor. As noted at Shot in the Dark:


The conspiracy theory that Obamacare was intentionally designed to wreck the system to make single-payer inevitable looks less and less far-fetched every day.

What theory? As Insty notes shouts:

YES, THE PUBLIC OPTION IS A ‘TROJAN HORSE’ TO DESTROY PRIVATE HEALTH INSURANCE: The “father of the public option” said on video that his plan is to eventually create a single-payer health care system. We should believe him.

And if you only read one of these articles in toto it should be the almost invariable sensible Megan McArdles: Health Care Is a Business, Not a Right


.  . . Anthropologists tell us that there are two different economic systems by which members of groups obtain what they need to live. One kind, market exchange, is the form that we’re all familiar with. You go to the store, you give the clerk money, and you get to take goods away with you. Market exchange is impersonal, explicit, and limited: I know exactly what I’m getting, and once we walk away, we have no further obligations to each other. Market exchange is what modern societies use for most of their economies, but what foragers use for dealing with strangers.

The second form of exchange is "reciprocal altruism," and you’re also familiar with it, though you may never have given it a name. It is a system of mutual obligation: I do a favor for you now, and you do a favor for me at some unspecified point in the future. Reciprocal altruism is not explicit, and it is not limited in the same way that market exchange is. It is what you do in families: your sister comes over to help you clean your house, and at some point in the future, when she asks for help mulching the yard, you’ll have a hard time saying no unless you can point to some other obligation that you’ve already taken on.

Hanson is suggesting that we have a strong intuitive preference for altruistic health care -- for an enormous, practically unlimited amount of altruistic health care -- because health care is a way to demonstrate loyalty and caring to people you love. But the thing about reciprocal altruism is that it's not supposed to be an explicit quid pro quo. That may explain why we like insurance that covers as much as possible and dislike any suggestion that the people who provide our health care are calculating what it will cost them to provide it. Bringing money into an altruistic exchange taints it (as you’ll quickly find if you try offering your spouse cash to get romantic when they say they’re not in the mood).

The issue, in other words, is not necessarily profit -- health insurers are not particularly profitable as industries go, and hospitals and other care organizations are often nonprofit. The issue is making decisions based on money.

Unfortunately, this leaves us with something of a problem. Reciprocal altruism is fine if all you need is for Mom to sit with you and brew you some herbal tea. But in a modern society, you need to procure health care from strangers -- which is to say, through the transactional system of market exchange. Nationalizing the health care system does not fix this fundamental disconnect between our evolved instincts and the inevitable necessities of a modern economy. . .