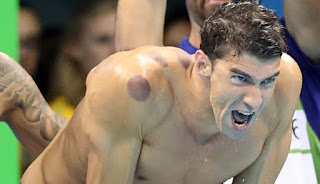 Pock-marked hairless beach pool ape Michael Phelps actually made the news, losing a gold medal by coming in second in the 100 m buttefly to Singapore's Joseph Schooling. Shortly afterward, he announced  'I am not coming back in four years'. However, teammate Ryan Lochte guarantees Michael Phelps will return in 2020 . Phelps gets one more chance to win gold in the 4x100-meter medley relay today. 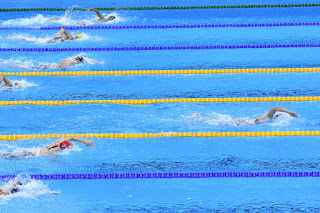 Speaking of schooling, Katie Ledecky won her fourth gold medal when she took the rest of the swimmers to school in the 800 m freestyle, almost lapping the field, and breaking her own world record mark with 8 min 4.79 seconds. That girl ain't quite human.

It was so cold in Rio's winter weather (remember, they're south of the equator), that the girls of the beach volleyball squad had to wear long long sleeve tops while defeating the similarly insulated Italian team of Marta Menegatti and Laura Giombini in straight sets. Come on, can't we get some warmer weather for the girls? 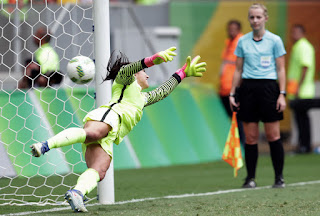 The US women's soccer team had their quest for glory cut short when a 1-1 tie was decided by penalty kicks against the the Swedish women.


"I'm very proud of this team. But I also think we played a bunch of cowards. The best team did not win today. I think you saw American heart. You saw us give everything we had today," she told reporters. 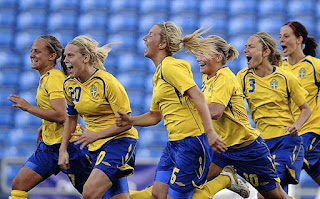 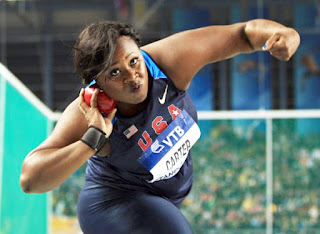 And last, for now, the US's Michelle Carter got the Gold in Women's Shot Put, with a throw of 20.63 meters. Her father, Michael Carter took a Silver Medal in Los Angeles, 1984, making them the first US father/daughter team of medal winners. Her dad also went on to become a professional football player, and won three Superbowl rings with the 49ers.  Hey, maybe she could save the Redskins!