The Foundation Puts the Crosshairs Back on Clinton.com 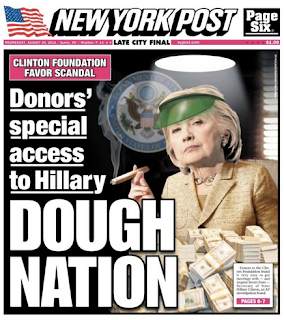 An extravaganza of Clinton Foundation corruption links: New revelations show a nation for sale under Hillary Clinton, well maybe not the whole nation, but at least the State Dept. Pay-for-play? Hillary hosted dinner for foundation donors — including an alleged Iran-sanctions violator (who needs help more than someone in trouble with the government?). Emails Show Clinton Foundation Donor Reached Out To Hillary Clinton Before Arms Export Boost - Guns for everybody but American citizens. 67 Emails Between Hillary and Chelsea Clinton under HER FAKE NAME “Diane Reynolds” That's an awful lot of subterfuge. Inside the exclusive events helping to fund Clinton and the Democratic Party. For the "little" people.

New email revelations that Hillary aide Huma Abedin left classified material in her CAR and asked colleague to move it to trunk for safekeeping. Hey, at least she thought about. Thant's more than can be said for Hillary. Sarah Hoyt on Huma's relationship with her mother's all jihad all the time magazine; POOR LITTLE HUMA JUST PLAYED PIANO IN THE PARLOR: How could she know what went on upstairs? Huma Abedin denies active role at radical Muslim journal.

Even liberals new organizations are beginning to roll over in their slumber The Hill: Emails threaten to shadow Clinton through Election Day. At this point, I would say they threaten to shadow her through posterity. Poltico: Hillary Clinton’s run-out-the-clock strategy - The Democrat aims to ignore the email and Foundation controversies, seeing a shrinking calendar as her friend. The Daily Beast: Hey, Hillary, It’s Past Time to Shut Down the Clinton Foundation. The Washington Post's Kathleen Parker: Hillary’s heel.

Remember, the State Dept. has always been complicit: Clinton State Department Stonewalled AP for Three Years. Remember that when someone complains it's too close to the election. The latest Clinton emails show what an ethics agreement shouldn’t look like. The State Dept ethics agreement regarding Clinton Foundation applied to Hillary, not Huma, Cheryl Mills or Jake Sullivan, all of whom worked for the Foundation as well. So really, what good was it?

Looks like I'm going to hell: Carville: Attack the Clinton Foundation and you’re risking your very soul, or something. Trump slams Hillary for 'Third World' corruption after it emerged that HALF of her meetings as Secretary of State were with Clinton foundation donors.  Trump Intensifies Attacks on Clinton Foundation. Trump, GOP see gold in Clinton Foundation attacks. Sinners!

Clinton’s awful plan to socialize college. An education that "nobody" pays for is an education nobody values. Clinton University: Bill pocketed $17.6 million from for-profit college Hillary assisted and now demonizes.

Hillary Health Watch: Commercial flights are too ‘burdensome’ for Clinton

“Do you think we could get a plane for Westchester flight back tonight?” Clinton wrote in an email released this week as part of an ongoing Judicial Watch Freedom of Information Act lawsuit against the State Department. “It’s going to rain all day and I still don’t feel great so the idea of playing a guessing game w the shuttle is really burdensome to me. What do you think? Could be anytime that works for the Air Force,” she added. 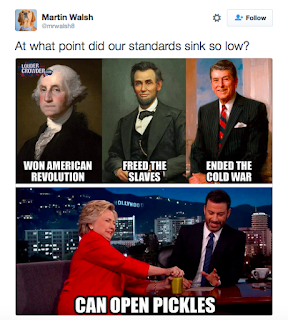 The health problem Clinton actually has


The Internet is awash with rumors about Hillary Clinton's health, but there is one medical condition she is actually known to have.

That is hypothyroidism, a condition affecting about 10 million Americans in which the thyroid is underactive, resulting in a variety of symptoms including fatigue, weakness and weight gain. 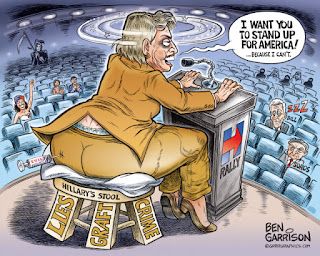 For most patients, the symptoms can be significantly reduced or eliminated with the use of hormone therapy. Clinton is being treated with a medication called Armour Thyroid, according to her doctor, who has issued a letter saying she's in "excellent" physical condition and is fit to serve as president.

Yet Armour Thyroid is a less common medication used in patients with hypothyroidism, possibly indicating Clinton wasn't responding well to the conventional treatment.

I can vouch for that. Georgia has hypothyroidism, and at one point, despite normal T1 levels (one measure of thyroid hormone, she was showing symptoms of hypothyroidism. Using Armour Thyroid (extracted from pigs thyroids, which contain the active form T3) helped.  There's a signal there that Hillary ain't quite normal.

Punch: Clinton to attack Trump in speech over his “disturbing ‘alt-right’ political philosophy”
Counter Punch: What a Clinton Supreme Court Would Mean for America

From  Wombat-socho's "In The Mailbox: 08.22.16", The Mystery Of Huma Abedin, Hillary’s New And Improved “Communication Stream Of Conspiracy Commerce”, Terrible News For Clinton This Morning, So Of Course Trump Vomits All Over Himself, Huma Abedin Was Working As Editor At her Mom’s Jihad Journal When It Blamed America For 9/11 Attacks, and from "In The Mailbox: 08.23.16", Hillary Clinton’s Feats Of Strength, A Clinton Presidency Would Be The Political Equivalent Of An Extinction-Level Event, FBI Files Linking Hillary Clinton To Vince Foster’s “Suicide” Missing From National Archives, FBI Launches New Investigation Of Clinton Campaign, “Nothing To See Here” To Follow, Dark Shadows, Sharia Prez – Hillary Vows To Shut Down Opposition Websites If She Wins, and  Clintoon – “Colin Told Me To Do It.” Powell – “Um, No I Didn’t”.
Posted by Fritz at 3:53 PM