Guess Who Refused to Accept an FBI Recommendation to Investigate Clinton.com?

Loretta Lynch, that's who! I guess that was a one time offer! Loretta Lynch’s Justice Dept. Declined FBI Request To Investigate Clinton Foundation

The Department of Justice declined a FBI request to open up a public integrity investigation into the Clinton Foundation, CNN reported on Wednesday.
According to the news network, the FBI made the request earlier this year, but the DOJ said it did not have enough evidence to open a formal probe. CNN reported:


The Clinton Foundation was not part of the recent investigation into her private server; it was separate. The FBI went to Justice Department earlier this year asking for it to open a case into the foundation, but the public integrity unit declined. The Justice Department had looked into whether it should open a case on the foundation a year prior and found it didn’t have sufficient evidence to do so.

Opposition to the FBI’s request — if the report is accurate — is likely to raise even more questions about whether the DOJ is acting impartially. Attorney General Loretta Lynch came under fire last month after it was revealed that she met in secret on her government airplane with Bill Clinton in late June.
. . .
The CNN report helps settle a question that government officials have largely avoided addressing. FBI Director James Comey declined last month to say whether an investigation into the Clinton Foundation was underway.

Clinton is also unfit to be president


An incontinent, narcissistic, authoritarian president would be a dire threat, though. So, also, would be a president whose decades in government taught her that she is above the rule of law and the rules of morality — that she has the right to lie and obfuscate, and to ignore the law.

Hillary disqualified herself when she took extraordinary means to ensure she could break the transparency laws that ensure government accountability — and then consistently and constantly misled and lied about it.
. . .
Clinton set up her own email server, conducted government business on it, hiding her emails from the legal authorities. She failed to turn them over when she left office (as required by law), and she deleted more than 30,000 of them before turning some hand-picked ones over to the legal authorities.

Then she lied about it consistently. She doesn't believe that her public business is the public's business.

"It's clear Hillary resents having to explain her email handling," the Business Insider's Josh Barro wrote on Twitter recently, "therefore won't level with the public about it."

Clinton sees open-government laws and transparency requirements the way D.C. drivers see the Rock Creek Parkway's 25-mile-an-hour speed limit, and air passengers see the requirement to remove their shoes: As a stupid, annoying set of rules that she is justified in flaunting

Of Course Hillary Wants to ‘Abolish’ the Second Amendment


Before he made his reprehensible “Second Amendment people” joke yesterday, Donald Trump said once again that Hillary Clinton wants “to abolish, essentially abolish the Second Amendment.”

Whenever Trump says this the press works itself up into a tizzy, the typical response being that Trump is “wrong” to make this claim because a) Clinton has not explicitly called for a constitutional amendment to neutralize the Second Amendment, and/or b) she has said “no more” than that the Heller decision was wrongly decided. But both of these positions are too clever by half.

As anybody with an elementary understanding of American law comprehends, one does not need to call an Article V convention in order to effectively remove a provision from the Constitution. If, for example, Donald Trump were to claim tomorrow that the First Amendment did not protect an individual right to speech, how do we imagine that the press corps would react? Do we think that the New York Times’s editorial board would nonchalantly say “well, that’s fine because he hasn’t called for Article V repeal”? Or do we imagine that it would cry — correctly — that this was pretty damn worrying given that Trump might be in a position to appoint judges? Clearly, it would be the latter — and rightly so. Who in their right mind would respond to a Court decision rewriting the First Amendment by shrugging, “well, at least it’s still written down on the parchment”?

Don't you think a "common sense measure" to restrict newspapers to being printed by hand operated presses capable of holding no more than 10 sheets of paper before reloading would be a hoot. And I don't think Trumps comment was reprehensible, but I do think a lot of never and anti-Trump people are trying to convince us it was. Some may even believe it. Trump, Clinton and the Second Amendment


In leaked audio from a fundraiser, Clinton suggested that she would like to see the Supreme Court overturn the Heller decision, a decision that ended a ban on handguns in D.C. From the Washington Free Beacon:


Although Clinton did not identify which Supreme Court case she disagreed with, she appeared to be criticizing the landmark 2008 ruling in District of Columbia v. Heller, which found the handgun ban in Washington, D.C., unconstitutional…
“We’ve got to go after this,” Clinton continued. “And here again, the Supreme Court is wrong on the Second Amendment. And I am going to make that case every chance I get.”

Again, Clinton did not say she wants to abolish the Second Amendment but there is evidence she would like to see the Supreme Court reverse itself on the Heller decision making gun bans possible once again. And in Trump’s defense, he did at first say Hillary wanted to “abolish” the Second Amendment, but then quickly corrected himself and said, “effectively abolish.”

Ann Althouse in response to a comment: Elizabeth Warren tweets Donald Trump "makes death threats because he's a pathetic coward who can't handle the fact that he's losing to a girl."


"Ann - I recall you saying more than once that it is not "easy" for SCOTUS to take back rights once granted."

Yes. I say that all the time. The Court is, in my opinion, unlikely to overrule Heller and say there is no individual right. I think it will only interpret the right to be so narrow that anything government chooses to do will be upheld as not violating the right. There is no reason to create the uproar that revoking the right would have. That's not the way the Court operates.

You do lose rights all the same, but it's subtle and harder to notice and talk about. It's not surprising then that the political candidate speaks in simpler terms. And frankly, Trump is choosing to speak to less well-educated people. They have the vote too. 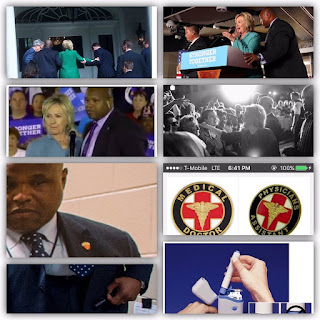 
It was not unfair, sexist, or a conspiracy theory to earlier ask these two questions:
- WHO is the "purple shirt guy?"
- WHY? is he constantly at Hillary's side?


A photo from April shows now-Democratic Party presidential nominee Hillary Clinton being firmly held up by a man on her right side to keep her from falling over as she addressed an overflow crowd during a campaign stop in Los Angeles, while a man on her left side is seen urgently extending his arm to aid in propping up Clinton. . .

I love me some blue-on-blue action: Animal Rights Protester attempts to rush stage at Clinton rally But note how HuffPo tries to blame Trump. In the same vein: Nets Squash Hillary’s Terror Woes to Scold Trump’s Gun Remark. Hannity: Let’s face it, these #NeverTrump people will own every one of Hillary’s policies. Yep. And enjoy: Ten Minutes of CNN Cutting Off People Who Dare Criticize Hillary

I feel cheated; it was only 9 minutes and 57 seconds.

A whole bunch more at Wombat-socho's "In The Mailbox: 08.10.16":  Who Killed Seth Rich?,  Guess What Didn’t Happen After The FBI Recommended A Clinton-Related DOJ Probe, The Girl Raped By Hillary’s Client Speaks Out, Bombshell E-Mails Reveal Clinton “Pay For Play” Scheme At State Dept., But Never Mind, Trump Said Something Stupid, Julian Assange Says The DNC Is Adding To The Clinton Body Count,  Assange Says Murdered DNC Staffer Was Wikileaks Source, Offers $20K Reward, Why Shouldn’t We Believe Trump Is A Clinton Plant?
Posted by Fritz at 5:31 PM