We'll get down to business, but first some Rule 5 (or is it 6?) for the ladies. Americans Ryan Crouser and Joe Kovacs scored Gold and Silver in the Shot put final yesterday. Crouser threw the 16 lb iron ball 22.52 meters (that's a long ways, for you non-metric folk), breaking the Olympic record of 22.47 m set by his hero Ulf Timmerman of East Germany in 1988.

Ashton Easton won his second consecutive Olympic Gold in the Decathlon, with a score of 8,893 tying the Olympic record he has set previously in London. I have no idea how that score is generated, although I tried out for decathlon in junior high. Apparently, slow, short guys aren't cut out for the sport. Best known for the Visa commercial starring he and his wife, Brianne Theisen-Eaton, who also competes in the heptathlon and pentathlon.

At least if this year's world's greatest athlete decides to change sex (or is it gender; I'm so confused these days?) he can just switch his name to Ashley and be done with it.

Of course, no mention of yesterday's results would be complete without relating how Usain Bolt of Jamaica won his third consecutive Gold in the 200 yard dash, and is hoping for third Gold in the 4 X 100 relay. You don't really need another picture of Usain, do you girls? Oh? OK.


The Chinese women  Ren Qian and Si Yajie finished Gold and Silver diving from the platform with nearly flawless dives. A Canadian, Meaghan Benfeito managed the Bronze, and American hopeful Jessica Parratto fell to 10th with some sloppy entries.

Ren Qian is 15, so it's likely she will remain a dominant player in the sport for quite a while. 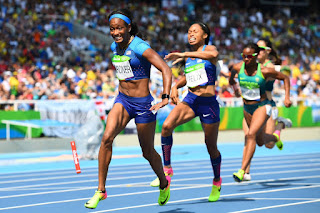 After Allison Felix was fouled by a Brazilian runner and dropped the baton, the ladies of the United States Track and Field team got a second chance to run the first heat of the  4×100-meter relay, on an empty track. It was a little strange, but they managed to qualify, which bumped China out of the contest. The Brazilian team was disqualified.