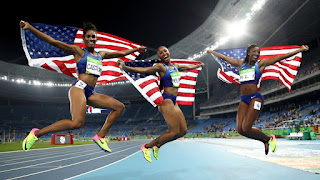 We're in the middle of the 10m platform diving, and Jessica Parratto of the US, having scored 7th in the synchronized event is in contention still as it Katrina Young.

Yesterday was the end of Women's Beach Volleyball, alas. First, in the final the German team of Laura Ludwig and Kira Walkenhorst rained on Brazil's Agatha and Barbara's parade as they fell quietly, 21-14 in the second set. 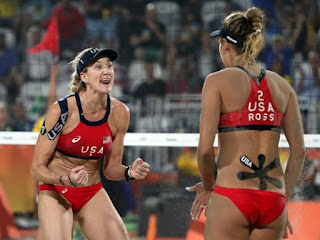 Then Kerri Walsh Jennings and April Ross dashed Brazil's second teams of Talita and Larissa hope for a Bronze, beating them in a tough match that went most of the distance, 17-21, 21-17, 15-9, with Kerri delivering a number of big blocks at the end.