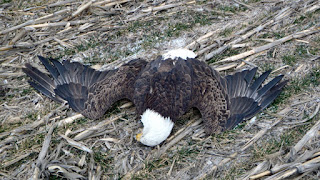 Inquiry Ending in Deaths of 13 Bald Eagles in Maryland


Federal wildlife officials say they're ending their investigation into who is responsible for killing 13 bald eagles found dead on Maryland's Eastern Shore earlier this year.

Neil Mendelsohn of the U.S. Fish and Wildlife Service said in a statement that officials intend to close the case "in the near future" because of a lack of evidence linking anyone to the crime. Mendelsohn said in the statement Friday that the eagles discovered in February on a farm on Laurel Grove Road were poisoned. Necropsy results had previously ruled out disease.

Not all crimes are solved, not all criminals get caught.
Posted by Fritz at 6:07 PM