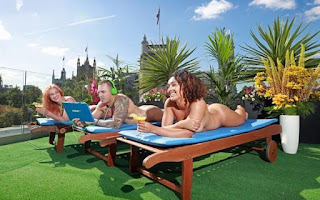 There seem to have been multiple instances of nudity in the London news lately; enough to make you think it might be a movement: 'Spectacular views': London gets its first ever naked sun terrace

There appears to be a nudist craze sweeping the capital - first we had the spectacularly popular nude restaurant Bunyadi, and now there is a naked sun terrace in the middle of London.

The venue opened on Tuesday and offers 'spectacular views' of the capital, looking over Westminster Abbey, the Houses of Parliament and the London Eye.
. . .
Visitors will be able to sunbathe in the open air and even have a nude work-out on a provided trampoline.

Now if only they had any sun. They had me until the trampoline. . . 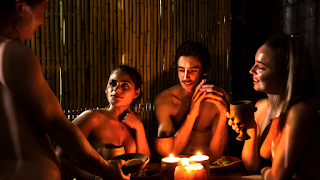 I believe I've already covered Bunyadi, but just for continuity


I'm in a candlelit London restaurant, sitting opposite a total stranger on a workday afternoon, and we're both completely naked.

And weirdly, it's OK. 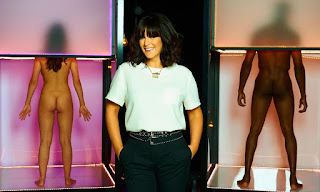 From the Guardian: Naked attraction: the apocalyptic rise of nude dating shows


Undressed puts two strangers in a room and makes them undress each other before they sit on a bed and get subjected to a hideous Clockwork Orange-style barrage of orders from a giant faceless screen. Meanwhile, Naked Attraction – which starts tonight – promises to present its subjects with a cavalcade of naked strangers and ask them to pick the sexiest.

Aside from a thin veneer of slightly unconvincing psychological grounding to validate the nudity, that’s it. Naked Attraction is barely even a dating show. It’s Am I Hot Or Not. It’s a knobbly knees competition. It’s a place where your parents can validate all the unspoken disappointment they ever felt about you. It’s going to make Sex Box look like The Ascent of Man. 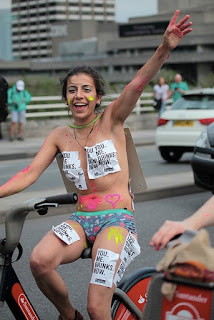 
The goal of London Naked Bike Ride 2016 is to raise awareness of the danger to the world due to pollution and get used to more health friendly means of transport such as cycling. Cycling makes the body more healthy and promotes body image self awareness. It also gives us non-renewable energy sources less dependent on oil.

I'm sure British Petroleum is just quaking in it's boots.

And I know, it's not London, but close enough.  Back in July, Kingston upon Hull, normally abbreviated just Hull, stripped down en mass and were painted blue: Thousands strip for Sea of Hull mass nude photograph 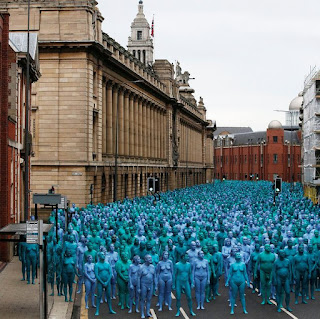 Thousands of volunteers gathered just before dawn to be daubed with four shades of blue body paint which represented water.

They posed at a number of locations across the city including Queen's Gardens, the Guildhall and the Scale Lane swing bridge, for a photo shoot that lasted about four hours.

One of the participants included 80-year-old Stephane Janssen, from Brussels, who has posed for Tunick on 20 previous occasions.

"It's just aesthetically fantastic. It's beautiful, we are little strokes of paint. Everybody is equal - no race nor sex difference - I mean, everybody is the same, naked...and that's what I love," he said.

There's a sucker born every minute. Maybe two, in Hull.

Wombat-socho's "Rule 5 Sunday: Post-Olympics Edition" is open for business at The Other McCain.
Posted by Fritz at 6:00 AM