What's Up in Rio? 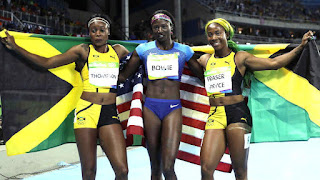 They figured out who the fasted woman alive is, for the time being. Elaine Thompson of Jamaica defeated her fellow countrywoman Shelly-Ann Fraser-Pryce, winner of the event in the previous two Olympics, who got bronze behind American Tori Bowie in the 100-meter dash. Shockingly, there was even a white woman in the race, Daphne Schipper of the Netherlands, who came in 5th with a time of 10.90 seconds. 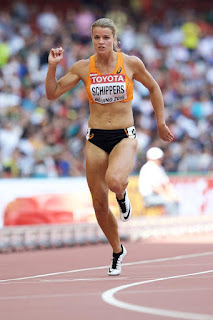 In swimming, pock marked aquatic ape Michael Phelps secured what he claims will be his final Olympic medal swimming the butterfly leg of the team victory in the 4 X 100 meter medley.

Simone Manuel of the United States has good day, winning Silver in the 50 m free style behind Pernille Blume of Denmark. Later the same day she swam the critical freestyle leg of the 4 X 100 meter women's medley, for a Gold, her second, for a total of two golds and two silvers.

We now know why the diving pools turned ugly green:


Rio 2016 officials said Saturday it was because a a contractor poured hydrogen peroxide into the diving well and the large pool in the center last week. The chemical reacted with the chlorine and turned the water an emerald green and increasingly murky.
.
Hydrogen peroxide is a de-chlorinating agent, which means it undoes what chlorine is supposed to do — kill germs and keep water clear. That could explain the murkiness that resulted, and, as the days went by, only got worse.


Rio officials maintained that the water was not a health hazard to athletes, and training sessions and competitions continued in the green pools.

But on Saturday, the pools were drained so the increasingly swampy water could be replaced with fresh water in time for synchronized swimming, which requires competitors and judges to have good visibility underwater. The process will take six hours, according to the AP, and another four hours to fill the pool, which will hopefully be ready for athletes by Sunday morning.

John Walters at Newsweek thinks Almaz Ayana's record-breaking win may be too good to be true:


Has anyone measured the track and pool in Rio? Are they the appropriate distances? It’s not unusual for a world record of three to fall at an Olympics, but what transpired at the Olympic Stadium on the first morning of the track and field program will only draw more skeptical eyes to a sport that has long been the jewel of the Olympics.