That pock-marked aquatic aquatic ape, Michael Phelps swam to another gold medal in the 200 meter individual medley, then turned around and qualified for another in less than 40 min. He now has four golds in Rio, and  with Katie Ledecky winning 2 more,  this makes  Maryland currently one of biggest gold medal winners of the Olympics, number 4,  ahead of Australia with 5 and just behind Japan at 7 currently. In swimming, Simone Manuel of the US, Penny Oleksiak of Canada tied for Olympic gold in 100m freestyle.

Isn't it time to end this ridiculous split and conquer Canada once and for all? Hey, Putin got Crimea, and part of Ukraine!


The big news, of course, for those of us that follow the US, is the gold and silver finish of Simone Biles and Aly Raisman in the gymnastics overall. It was dog walking time when it came on last night, but I did catch Simone's mat exhibition. Am I wrong, or do these girls look like they were drawn by Marvel Comic illustrators, with bulging muscles and flying through the air like they've been bitten by radioactive spiders or something?


All they need is web shooters. 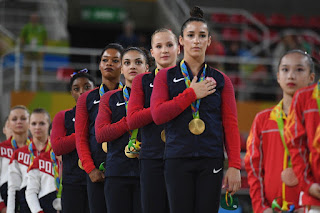 The next mini-scandal is that Gabby Douglas forgot to put her hand over her heart during the playing of the Stars Spangled Banner at the medal ceremony of the team all arounds: The LA Times was pretty harsh, but


. . . she issued what was at least an explanation if not a full blown apology. (USA Today)


First I want to say thank you everyone for all your support! It’s a huge honor for me to be able to represent #TeamUSA. In response to a few tweets I saw tonight, I always stand at attention out of respect for our country whenever the national anthem is played. I never meant any disrespect and apologize if I offended anyone. I’m so overwhelmed at what our team accomplished today and overjoyed that we were able to bring home another gold for our country!

So much time, so little material: The six month process of designing, sponsoring and fittings that led to Team USA's customized beach volleyball bikinis

So let's have another look at that: 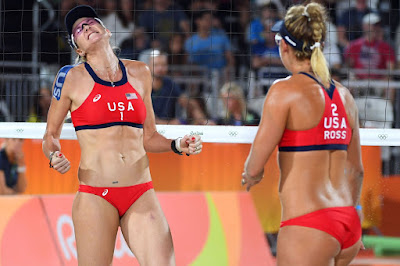 That's worth every second of  the time and every penny of the expense!

Wombat-socho has a plain vanilla "Rule 5 Sunday" ready at The Other McCain.
Posted by Fritz at 10:38 AM