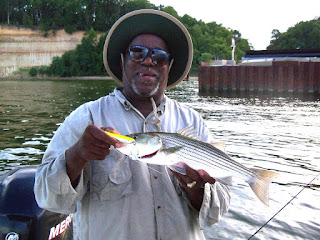 It's been so bloody hot out that even fishing didn't sound fun, but it cooled off and dried enough today that Trevor and I decided to give it a try, and left around 6 PM. The heat index on the new thermometer read only 97.  The bad news is the fishing sucked. Trevor caught the only fish, this ambitious little striper that hit a big popper. I had one swirl on the Zara Spook nearby 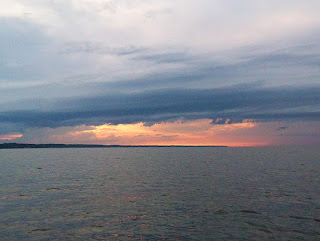 A big dark cloud coming down from the north started spitting lightning bolts, but it appeared to be sliding to the east, so we stayed around a while 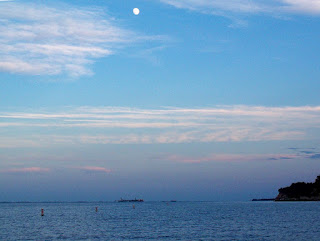 The view to the south looked pretty good. Eventually, we started seeing flashes to the east, the direction the storms usually approach from, so we called it.
Posted by Fritz at 9:00 PM