Judicial Watch just released 44 new Hillary Clinton emails that were not among the 30,000 emails that she turned over to the State Dept., presumably among the 30,000 that her lawyers deemed personal and deleted. These emails were located by searching the emails in Huma Abedin's stash (hint, when destroying digital evidence, get it all). As we all expected, some of these emails were more significant than Chelsea's wedding plans and yoga routines, confirming our suspicion that they likely involved "pay to play" contributions to the Clinton crime syndicate. For example, in one email, State asked to ‘take care of’ Clinton Foundation associate

Shortly after Hillary Clinton took the reins as U.S. secretary of State in 2009, a longtime confidante with deep ties to the Clinton Foundation pressed her senior aides to give a job to an unidentified male associate.

“Important to take care of” the person, Douglas Band told Clinton aides Huma Abedin, Cheryl Mills and Nora Toiv in an April 22, 2009, email with the subject line “A favor…”. The name of the aide is redacted.

“We have all had him on our radar,” Abedin responded. “Personnel has been sending him options.”


In an April 2009 email to Clinton’s State Department aides Huma Abedin and Cheryl Mills, President Clinton’s former body man, Doug Band, the founder of corporate consultant Teneo, urgently asked them to set up a meeting with an ambassador for a major donor to the Clinton Foundation.

“We need Gilbert Chagoury to speak to the substance person re lebanon. As you know, he’s key guy there and to us and is loved in lebanon.”

We also found out that the FBI probe of Clinton's emails prompted by espionage fears. What? Not a


Two secret letters the FBI sent to the State Department have revealed for the first time that the bureau's investigation into Hillary Clinton's private email server, and the classified emails sent through it, stemmed from a so-called "Section 811" referral from the Intelligence Community's Inspector General (ICIG). The ICIG determined that classified, national security information in Clinton's emails may have been "compromised" and shared with "a foreign power or an agent of a foreign power."

The RNC has opened an new front in the investigation of Clinton emails New Clinton email fight: Bill Clinton's schedules An RNC lawsuit is trying to force release of the records, but it may not gain traction before the election.


"The record ... reflects that State Department officials and Clinton Foundation officials worked essentially hand in glove, coordinating President Clinton’s schedule and whom he would speak with, as well as talking points and even briefings with regard to political ramifications of certain meetings or events," wrote Jason Torchinsky, an attorney for the RNC. "The electronic calendar records at issue here merely are a function of, and inextricably intertwined with, that coordinated effort with the federal agency officials."

Fresh today, another release by Judicial Watch suggests the Cheryl Mills memory about the FOIA requests was conveniently lacking. Short-Circuit Damage to US Security: Hillary’s Lies and Amiri’s Execution

Benghazi victims’ families file suit against Clinton, claiming that her sloppy email habits led to security leaks that got their sons killed. I doubt it will go anywhere, but right cannot let the left continue to fight using lawfare without any response.

All of which has Howard Dean screaming ‘What more do you want?’ while defending Hillary’s email lies. I, for one, would like her to stop lying.

Wikileaks: Huma Abedin Had Access To, and Used, the Hillary Clinton Email Address By Which She Received and Sent Classified Information "Was Huma Abedin "read into" the "read-into-only" compartmentalized classified information Hillary had on her servers?" Of course, you don't really expect the queen to soil her fingers with such trifling tasks as national security when the more important Clinton crime family business needs husbanding wifing? The exiled head of Wikileaks, Julian Assange is insinuating that its was a DNC leak and not a Russian leak, and that the DNC had the leaker, one Seth Rich, killed. I'd hate to think our politics have gotten that low. 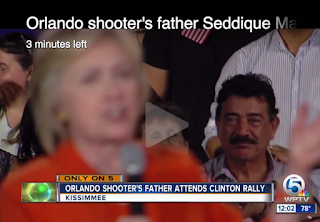 Another major story yesterday was that the Father of Orlando Nightclub Shooter Omar Mateen Appears At Hillary Rally, Seated Right Behind Her. It would be one thing if he were moderate Muslim, but he supports the Taliban, and the idea that gays should be killed. What where they thinking? Well, his son was a Hillary supporter too. Instapundit shouts “NOW LET’S PRETEND MATEEN WAS A REPUBLICAN AND HIS FATHER SHOWED UP AT A TRUMP RALLY. YOU KNOW HOW THAT WOULD GO.” Or Dylan Roofs parents? Survivor 'outraged' at Omar Mateen's father attending event. Ann Althouse asks Does it mean anything that the father of Omar Mateen, the Orlando shooter, showed up at Hillary's Orlando rally? The fun, as usual, is in the comments:


My name goes here. said... It means that people that make anti-American videos, and/or support the taliban, and/or support run for the office of President of Afghanistan, and/or are under investigation by the FBI, and/or blame the pulse nightclub for the shooting that occurred in that nightclub have a political party they think is in alignment with them.

Why, maybe that explains why Bill Clinton Received $5.6 Million from World’s Largest Sharia Law Education Firm. Instapundit asks: Are they both trying to lose the White House? Trump runs amok while Clinton accidentally hangs out with a terrorist's dad.


During the Democratic National Convention, the office of Philadelphia’s most powerful construction union served as a headquarters for Hillary Clinton’s campaign, and just a week later it was raided by federal agents.

According to a report from Heat Street, authorities raided the office of the International Brotherhood of Electrical Workers Local 98, but they didn’t stop there. The union’s powerful boss, John “Johnny Doc” Dougherty, who also heads the Philadelphia Building and Construction Trades Council, also had his home and a pub he runs raided by federal agents.

Video uploaded to Facebook appears to show a yellow Penske truck being loaded with computers, filing cabinets, boxes of documents, and even the printers inside of the building.

More likely having to do with union crime than Clinton crime, but you never know what might show up. Grand Jury Investigating Powerful, Clinton-Supporting Union for Allegedly Threatening Foes

CLINTON VS. TRUMP TAX PLANS: The Differences to Your Wallet Will Blow Your Mind


Clinton wants to increase taxes on individuals, specifically wealthy Americans, and businesses. She also proposes a significant change to the capital gains tax and wants to expand the estate tax, according to analysis by the Tax Foundation.

Trump wants to abolish the estate tax and wants an income tax reduction that encompasses most American families.

Ann Althouse wonders Will Hillary Clinton skip the debates? I've been suspecting it all along. She'll just say something about how "extreme" he is, and try to stay under her invisibility cloak.

Hillary's health scrutiny continues. Is This Hillary Clinton’s “Medical Handler”?… The guy who carries the diazapam injector for seizure emergencies? Law Enforcement Officials, Medical Professionals: There’s Something Seriously Wrong With Hillary Clinton’s Health. I remember a lot of ink being spilled because of John McCain's bout with cancer. Kathy Shaidle looks at her Myers-Briggs Type Indicator and concludes:


As a female INTJ, she’d be so much happier living in a lighthouse than in the White House. Wouldn’t it be great for America’s future if only she admitted that, too?

The Hill newspaper is being accused of Hillary favoritism after it used a fake photoshopped crowd to promote a live video stream of Clinton’s rally in St. Petersburg. She can't just elect herself, after all, as much as she'd like to.

Child rape victim comes forward for the first time in 40 years to call Hillary Clinton a 'liar' who defended her rapist by smearing her, blocking evidence and callously laughing that she knew he was guilty


Shelton said Clinton accused her during the case of 'seeking out older men', and demanded that the 12-year-old undergo a grueling court-ordered psychiatric examination to determine whether she was 'mentally unstable'.

'I don't think [Clinton's] for women or girls. I think she's lying, I think she said anything she can to get in the campaign and win,' Shelton said. 'If she was [an advocate for women and children], she wouldn't have done that to me at 12 years old.'

While Shelton gave an anonymous interview to the Daily Beast in 2014, she said wants to start speaking out publicly, in part because 'I think a lot of people would look at [Clinton] in a different way' after hearing her story directly.

Will Hillary and her crowd give her the same respect they gave the Benghazi moms? Read on. It's pretty bad.


The rapists lured the girl -- I guess she was "seeking out older men" -- into a van, then raped her so badly she needed to get stitches in her vagina.

She cannot bear children due to the attack.

In related news, Trump punched a baby in the dick. Then he said something about guns and judges. It's just terrible. I just can't even.