A pretty small set to start the week. If you only read one thing about the scandal of Andy McCabe not being prosecuted for lying to the FBI, make it this article by Andy McCarthy at NR, Why Wasn’t Andrew McCabe Charged? He covers a lot of angles, but basically it comes down to you can't charge all the people who lie to the FBI and CIA; the jails aren't big enough and we don't have enough prosecutors, and anyway, a D.C. jury filled with Trump haters would let him off anyway

The FBI’s former deputy director, though he undeniably misled investigators, remains a commentator at CNN. In the meantime, Papadopoulos is a felon convicted and briefly imprisoned for misleading investigators, while Flynn and Stone are awaiting sentencing on their false-statements charges. That covers both tiers of our justice system. 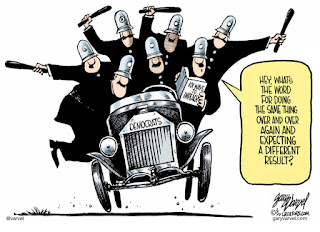 So basically guilty as hell; free as a bird. Unless Durham does something. Lots of good discussion on the article at Althouse in "Why not indict McCabe on felony false-statements charges? That is the question being pressed by incensed Trump supporters."


"After all, the constitutional guarantee of equal justice under the law is supposed to mean that McCabe gets the same quality of justice afforded to the sad sacks pursued with unseemly zeal by McCabe’s FBI and Robert Mueller’s prosecutors. George Papadopoulos was convicted of making a trivial false statement about the date of a meeting. Roger Stone was convicted of obstruction long after the special counsel knew there was no Trump–Russia conspiracy, even though his meanderings did not impede the investigation in any meaningful way. And in the case of Michael Flynn’s false-statements conviction, as McCabe himself acknowledged to the House Intelligence Committee, even the agents who interviewed him did not believe he intentionally misled them.... "


. . . but I think the answer to why McCabe is now going on CNN and proclaiming vindication is much simpler – career officials screwed this up, either on purpose or via incompetence.

I believe that if Bill Barr and his DOJ had a decent probability for a conviction of McCabe, they would of pressed through with the case. It makes no sense to suggest otherwise. Barr stands to gain absolutely nothing by protecting McCabe and McCabe has been no friend to Barr throughout this ordeal. Why would the AG tick his boss off just to help out a guy who’s been calling for his resignation?

as well as Sunday Talks: Congressman Matt Gaetz Discusses Questions for Bill Barr Testimony… and DOJ Corruption – The Fork in The Road Few Noticed – What Bill Barr Needs to Explain to Everyone…
At the MSN the NYT whines that Fearful of Trump’s Attacks, Justice Dept. Lawyers Worry Barr Will Leave Them Exposed like that would be bad thing. And at the WaPOO, More than 1,100 ex-Justice Department officials call for Barr’s resignation. You might guess who they are. And you'd be right.

At the American Mind Angelo Codevilla urges us to Abolish CIA & FISA. Throw in the FBI and I'm down with that. Insty considers Kurt Schlicter's article Trump Charges the Liberal Hacks’ Latest Ambush. "It’s not Trump who’s wrecked out institutions. But his opponents are discovering that the rubble doesn’t make for great cover, or even concealment."


A phone hearing is scheduled this week for convicted felon and seersucker suit enthusiast Roger Stone. POLITICO reports the meeting will happen Tuesday between the Justice Department and Stone’s attorneys just two days before he’s scheduled to be sentenced.

He's not a Stone enthusiast, and expects the judge not to declare a mistrial based on the obvious jury bias. I'm hopeful, but not overly optimistic.

At the Atlantic Graeme Wood admits Americans Are Suckers for a Certain Kind of Grifter, For a time, Michael Avenatti fulfilled the left’s most destructive psychological needs—much as Donald Trump has done for the right. Make that leftists are suckers for a certain kind of drifter, and I'll agree. At WaEx it is reported CNN's Jeffrey Toobin says he feels 'snookered' by Michael Avenatti 'because I took him seriously', which only matters if he stops to think about how it happened. 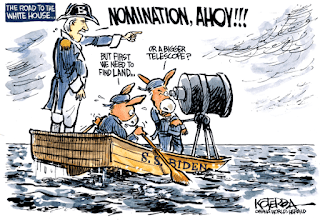 Jazz Shaw at Hot Air puts Joe And Hunter Biden’s China Connections Under Even Closer Scrutiny. Stu Cvrk at Red State elaborates how Rudy Giuliani Lays Bare Joe Biden’s–Not Hunter’s–Crimes in Ukraine. Yep, I don't see a crime in Hunter taking advantage of the opportunities offered him, but I do see the crime in Joe acting in official capacity to promote it.

At Da Blaze, Ukrainian president slams Trump impeachment as a 'soap opera,' undermines key Dem argument "He compared it to 'Dallas' and 'Santa Barbara'" but those shows had better writers.