Like Titanic we knew how this show would end. But first some foreshadowing, to build suspense. Althouse, "Sen. Doug Jones (D-Ala.), who faces a tough reelection race in Alabama, will vote to convict President Donald Trump on both articles of impeachment", Politico reports, and Capt. Ed at Hot Air, Doug Jones To Vote For Conviction On Both Impeachment Counts.   Also Althouse, "Rushing an impeachment case through the House without due process and giving the Senate a half-baked case to finish set a dangerous precedent."  Writes Senator Rob Portman in "Why I’m Voting to Acquit President Trump/Impeachment will end in the Senate. It’s time to take up consensus issues" Then at 2 PM  , Moment Of Truth: Romney To Speak On Impeachment Around 2 P.M. ET; Update: Romney Votes To Remove On One Count; Update: Sinema On Both Counts; Update: Manchin Too. So do they have enough to break the red wall! Nope, the ship sinks in the end. 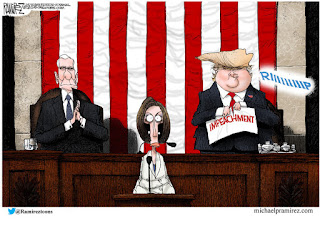 So, Ace put up the bold red font and the flaming skull for SENATE VOTES 48 "GUILTY," 52 "PERFECT!". . . That was on count one. On count two, it was 47 "Guilty," 53 "Beautiful.". John Hinderacker at Power Line writes, Our Long National Nightmare Is Over. Oh, just you wait. Tyler O'Neil at PJ Media, A Jury of His Enemies: 2020 Dems Try to Subvert American Voters, WXYZ News, Trump acquitted by Senate on articles of impeachment for abuse of power and obstruction of justice. WaPoo In historic vote, Trump acquitted of impeachment charges (sub head Republicans clear president after historic three-week trial), also 69 million Americans voted for senators who supported impeachment 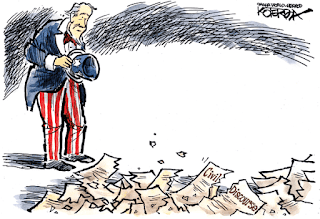 The story of the day, was of course, Pierre Mit Delicto's Romney's defection. It just happened that his personal hatred of Donald Trump lined up with his religious convictions, and persuaded him to vote against the President on the abuse of power charge, and probably freed Sinema, Jones, and Manchin from any pressure to defect from their side, and led to a "bipartisan" minority to convict.

Romney’s conviction vote all but assuredly led to Manchin, Jones, and Sinema voting in lockstep to convict. At least one (perhaps more) would have otherwise acquitted. 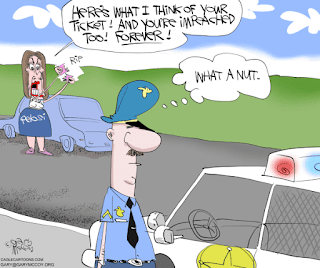 Ace, Traitorous NeverTrump Mercenary and Credibly Accused Gay Hair-Rapist Mitt Romney: I Vote to Convict. AllahPundit at Hot Air, Romney Sent A Signed Note To Every Senate Republican Explaining His Vote And It’s Something, and Romney To Fox News: I Know There’ll Be “Extraordinary” Consequences For My Vote.  He won't be invited to any of the good parties, at least on the Republican side, but that's OK, he doesn't drink.  Also at Ace's, Erielle Davidson: "Romney’s Entire Career Has Been About Punishing Republicans For Voting For Him" "Brutal, but completely true." Althouse,  "It is the last decision I wanted to take. The personal consequences, the political consequences that fall on me as a result of that are going to be extraordinary." "ADDED: Quick! Mitt! Change parties. Become a Democrat, and go for the nomination for President this year." WaPoo, Romney knew a storm was coming over his vote. How long it lasts is up to Trump.  Dana Loesch, There are Two Paths: Romney and His Grudge


Romney’s vote wasn’t going to count either way, enough votes were confirmed to determine acquittal, but Romney wanted to make a show of it. He didn’t just vote his conscience, his virtue-signaling was level Pharisees, minus the sackcloth and ash. He orchestrated a pre-taped interview with Chris Wallace to discuss it and will assumedly relish his footnote in history as being the only member of government to convict his same-party president despite a total absence of criminality. That’s fine. I’m not begrudging Romney for his conscience, but I do take issue with how he and his surrogates took issue when voters expressed ours in 2012. We all mess up as all are imperfect, but it seems weird to advertise your faith while also demonstrating a bitter refusal to forgive: forgive being passed over in 2012, forgive not being selected for a choice cabinet position in 2016. Utah voters knew what they were getting when they voted for him and he’ll likely have his seat for a long time. I’m guessing that he would eagerly like to try again at redefining what the GOP is and where it goes in 2024 after Trump leaves office and outsized shoes to fill — not as a candidate, but as a power player, an influencer.

Althouse, When a politician says he's "profoundly religious" and that explains what he is doing, do we shrink from the question of sincerity?


I'm asking the general question, which I've thought about a lot (having taught a course on Religion and the Constitution for more than a decade). But you know the prompt for my question, Mitt Romney's assertion:

I suppose that depends on whether their sincere opposition is to LGBT matters and abortion, or Presdient Trump.


“The process was a waste of time and resources, its motivations completely divorced from reality. At taxpayer expense, President Donald Trump’s counsel spent weeks litigating a policy disagreement over the President’s foreign relations strategy; meanwhile, seven House Democrats shamelessly questioned whether American voters could be trusted to decide for themselves whether the President’s agenda and policies were appropriate. By the end of the trial, we’d heard about a cover-up, a quid pro quo, extortion and bribery—all despite the fact that no crime was alleged in the two articles the Senate was tasked with debating.

“History must take note of the lessons we’ve learned from these destructive methods.

“The House overstepped the bounds of its Article I oversight power, abused its authority and used impeachment for political gain. The House Managers’ actions ignored the fact that Congress is guided by history, precedent, and above all, the Constitution; we should thank the Framers for troubleshooting diligently enough that we could be prepared for this scenario.

“Fortunately, we saw that when the House ignores precedent in favor of partisan politics, the Senate will not hesitate to put the lower chamber back in its place.

“That’s exactly why today I voted to acquit President Trump—because lowering the high bar of impeachment such that any American could be found guilty is far more dangerous than anything the Democratic ‘resistance’ has asserted.

“My fellow Tennesseans saw right through the games and the intentional mishandling of the Democratic House Managers’ constitutional duty. They know this was nothing more than a dangerous and desperate attempt to pre-litigate the 2020 election, and remove President Trump from office—and the ballot. Thanks to the tireless leadership of Majority Leader McConnell, the Senate completed its task. The House Managers failed to prove their case, even by their own standard.”

Ace, Trump Responds to Romney, and It Looks Like He's Declaring War,, but Jim Treacher at PJ Media notes that Lawrence O'Donnell, Who Once Challenged Mitt Romney's Son to a Fistfight, Now Loves Mitt. I know who I'd rather have mad at me. 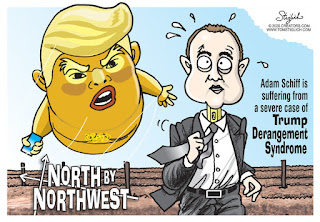 WaPoo, Democrats at a crossroads after Trump’s acquittal, torn between investigations and sole focus on policy. CNN, Nadler: It’s Likely The House Will Subpoena Bolton, of course.

Sundance at CTH, ACQUITTED !! – Now Lets Get Down To Business…, CNS News, McConnell: Trump’s Original Sin Was ‘That He Won, and They Lost’ and got right back to business, (Da Wire), McConnell Triumphant: Immediately After Impeachment Acquittal Files Cloture On More Judges To Remake Judiciary. Stick it to 'em.

Citing a case of Andrew Jackson and a vote of censure, Jazz Shaw at Hot Air wonders Wait… Trump Can Have His Impeachment Expunged? Heh. WaPoo whines Will acquittal kill the impeachment clause? The voters get the final say. You could have saved a lot of ink and digits. Megan Fox at PJ Media, BACKFIRE: 'I Will Never Vote Democrat Again,' Say Angry Dems on C-SPAN After Pelosi's Tantrum, but at Hot Air VIP, AllahPundit assures us Dem Sen. Sherrod Brown: Privately Republicans Tell Me They Know What Trump Did Was Wrong. WaPoo, White House national security adviser says Trump didn’t seek Ukraine’s help with investigations despite evidence to the contrary,

Also, you can find all 4+ hours of Wray's testimony at FBI Director Chris Wray Testifies to House Judiciary Committee – 10:00am Livestream…. Maybe later...

From Adam Mill at AmGreat, documents doing well by doing ill in Breaking the Law Pays When It’s Done to Get Trump "Hating the president is good business and it works as a near-guaranteed immunity from prosecution." while Jedd Babbin at Amspect writes of Preventing Another ‘Crossfire Hurricane’ "Now is the time to go after real abuses of power and keep them from occurring again."

Breaking: from their press office -

“Good afternoon, Senators Grassley and Johnson today requested Hunter Biden’s official travel records from the U.S. Secret Service as a part of their ongoing probe into potential conflicts of interest.