Russiagate on the Rise

We seem to be back with regular order, with a fair pile of the old Russia/spygate, in addition to a mess of shampeachment and Ukraine nonsense. 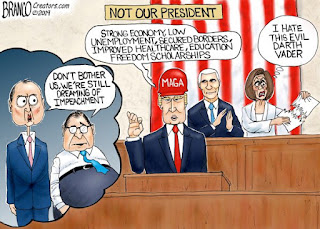 First, DOJ Recommends 7 to 9 Years in Prison for Roger Stone… and shows how they got there using sentencing guidelines. (Sundance, CTH). WaPoo, Roger Stone deserves 7 to 9 years prison for lying to Congress in Russia probe, U.S. says in sentencing recommendation for Trump confidant Capt, Ed at Hot Air (VIP) “Cannot Allow This Miscarriage Of Justice”: Trump Slams Stone Sentencing Recommendation. Althouse Retweeted by President Trump, who is himself older than 67 and deserves no special mercy on account of his age.

Ah yes, comparing bureaucrats who demonstrably abused their power to people who died in the holocaust.

Via the Wombat's In The Mailbox: 02.10.20, Victor Davis Hanson at AmGreat discusses The Once and Future Scandal.  Capt. Ed (VIP), CBS: Hey, Graham’s Serious About Holding Hearings Into FISA Abuse In Crossfire Hurricane, But …

Maybe next time don’t sext the married counterintelligence agent you’re sleeping with on your government phone about your plans to illegally spy on the president with fabricated intel from a foreign spy working for a sanctioned Russian oligarch. https://t.co/rDuwvCAkDN
— Sean Davis (@seanmdav) February 9, 2020 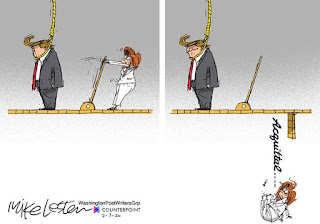 Rick Moran at PJ Media cites Sara Carter in Sara Carter: If Durham Probe Fails, Nothing Will Stop 'Attempted Coups' in the Future "Ordinarily, Democrats fancy themselves guardians of civil liberties. But exposing FISA to the kind of criticism you might expect would help Donald Trump. That just can't happen." VWashDaNews shows that Bill Barr Indicts 8 For Illegally Funneling Foreign Money To Adam Schiff And Multiple Dem Senators. Remember how they got Dinesh D'Souza a half way house for eight months for a $20k contribution he made for someone else? Well, this is millions.


Petry went on to explain that Vindman, according to friends who had been with the lieutenant colonel in Ranger School, had referred to him as a “chow thief” and had not thought highly of him even then. “In ranger school, [they] said he couldn’t be trusted. They tried peering him out. They said, ‘Well, I guess it hasn’t changed much.’ Usually folks that try to make a big statue of something, what we call spotlighters in the military, trying to highlight themselves as a hero or doing something great. and you could do something great just doing your job.”

Henry Olsen at WaPoo opines Trump got rid of Vindman and Sondland. So what?  Paul Bedard at WaEx finds it's Bigger than Vindman: Trump scrubs 70 Obama holdovers from NSC


Officials confirmed that Trump and national security adviser Robert O’Brien have cut 70 positions inherited from former President Barack Obama, who had fattened the staff to 200.

Many were loaners from other agencies and have been sent back. Others left government work.
. . .
Since entering the White House, Trump has relied on staffs smaller than previous administrations and has noted how prior presidents had a much smaller NSC team.

O’Brien recently said that former President George W. Bush handled the wars in Iraq and Afghanistan with 100 NSC aides, a model he is instituting.

“This month, we will complete the right-sizing goal Ambassador O’Brien outlined in October, and in fact, may exceed that target by drawing down even more positions,” John Ullyot, the NSC’s senior director for strategic communications, told Secrets.


By the way, have you noticed this odd couple of propositions urged by Democrats, the media, and NeverTrump (but I repeat myself thrice)?:

Proposition 1. The presidency of the United States is a fairly trivial office whose occupant can be swapped out whenever the Ruling Class is upset. Upsetting the Ruling Class counts as an impeachable offense.

Proposition 2. Low-ranking political appointees in the federal bureaucracy should have Lifetime Appointments and may not be removed from their positions, ever, except by Democrat Presidents. Insubordinate bureaucrats -- even those who proudly declare they are part of the #Resistance dedicated to undermining the civilian government they are a part of -- have guaranteed Lifetime Tenure and efforts to fire, demote, or sideline them are grossly unconstitutional and indeed an impeachable offense. (See Proposition 1.)


Giuliani elaborates: “The three of them will say that they were at the National Security Council and two members of the National Security Council who represented Biden asked them basically to dig up dirt on the Party of Regions and any of their consultants, and their consultant was [Paul] Manafort. It was later clarified they wanted Manafort. And one of the key people at the meeting making the request is one of the people suspected of being the whistleblower.”

In short, “Obama’s people are asking political operatives of Ukraine to get information on the Trump campaign. It’s as simple as that.”

If only the DOj and FBI had the same attitude about the Steele Dossier. 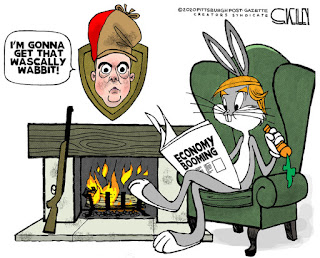 Nice Deb at AmGreat, reports Missing $1.8 Billion in Aid Linked to Corrupt Oligarch Who ‘Bankrolled’ Ukraine Revolution. A billion here, a billion there, and pretty soon you have enough to pay back American politicians. Dan Sobieski, AmThink reminds us of Romney's Links to Burisma

Tristan Justice at Da Fed Grassley, Johnson Blast Democrat Senators For Leaking Oversight Material About The Bidens. It's who they are, it's what they do. Don't trust them.

As CNN whines that Trump weaponizes the Presidency after impeachment victory, Matthew Boose at AmGreat says of  Trump’s Angry and True Victory Speech "What they call dictatorship is a democratically elected president appearing, at least momentarily, to get the upper hand over a managerial elite." 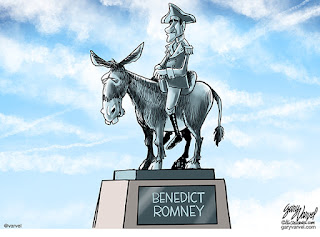 At Mediaite, Matt Schlapp on Banishing Mitt Romney From CPAC: I Would Be ‘Afraid For His Physical Safety’ If He Came and NYPo, CPAC chair says Romney was uninvited because ‘physical safety’ would be at risk. Sarah Hoyt at Insty responds, NOTE HOW THEY AVOID INSULTING PIERRE DELECTO BY INSULTING THEIR WHOLE BASE INSTEAD. I WONDER WHAT THEIR NEXT TRICK WILL BE? SHOOTING OFF THEIR FEET? AH, STUPID PARTY, NEVER CHANGE

Eugene Volkh at the Volkh Conspiracy, "Now That Democrats Have Failed in Their Attempt to Remove the President from Power, it's worth asking why they haven't seriously considered the reverse: removing power from the president." But they might want it back in a hurry if they win an election.
Posted by Fritz at 10:46 AM