With a little bit of Russiagate thrown in for good measure. So, how about that Superbowl! I didn't pay that much attention for the first half, which is OK, 'cause it ended in a tie, but I was fully awake for the Chiefs spectacular comeback. Pretty good game as Superbowls go. Stacy McCain, Chiefs Come Back to Win Super Bowl; Halftime Show Unexpectedly Goes NC-17.  Now, I'm not really a good analyst of football, so I have a question. Did the Chiefs just wear down and outlast the SF defense, or did they figure them out in the nick of time? 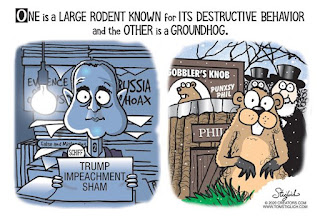 On the Shampeachment It seems the never-Trumpers and Democrats have raced right through denial stage (which is appropriate, since they always knew how it was going to come out) and are entering a long and bitter period of anger. At Wapoo, Max Boot says The GOP doesn’t deserve to survive this debacle. Also WaPoo, Senate to emerge from impeachment trial guilty of extreme partisanship, Inside the Senate trial: McConnell stops rebel push in GOP for witnesses, and Dana Milbank, The Senate impeachment trial was rigged!. EJ. Dionne, Progressives and moderates: Don’t destroy each otherThe enemy is Trump, not Clinton or Obama.  Ruth Marcus, When the impeachment trial ends, the Senate’s reputation will be hopelessly in tatters, Dan Balz, Impeachment is a wrenching process. The coming election will be, too.  and that's the WaPoo. NYT (cited by Hot Air), Trump Will Emerge From The Trial Triumphant And Unshackled. And they say that like it's a bad thing! I'm sure there's plenty more where that came from. Twitchy, ‘FFS’: Bill Kristol says ‘we are all Democrats now’ (and people have thoughts). Paul Goldberg at NewsThud has Miasma Hirono “I don’t care what kind of nice, little, legal, Constitutional defenses that they came up with” and  From Jonathon Turley, One of the House "professor' witnesses, Michael Gerhardt thinks The Entire White House Defense Team Will Face Bar Charges. Just banging his head on the floor would be better. Spencer Neale at WaEx, 'They're all cowards': Maxine Waters slams 'insufferable and pathetic' Republican senators. At WSJ, Gerald Seib, Trump’s Impeachment Is Virtually Over. What Did It Change? 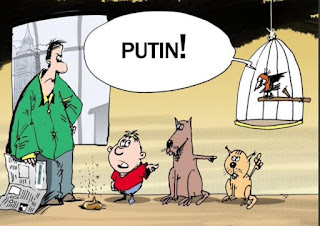 On the other hand, you can't blame Republicans for engaging in a bit of triumphalism. Even at WaPoo, Hugh Hewitt, Memories of this impeachment charade will fade quickly. Nope, elephants have good memories. Ace, The Impeachment Farce Has Exposed More Than The Insane NeverTrump Mania Of The Democrat Party...  Paul Bedard at WaEx, Weekly Trump Report Card: Democrats crushed on impeachment, solid 'A'. Liz Vaughn at Red State, Georgetown Law Professor Stomps All Over, Jumps Up and Down on, Then Sets Fire to the House Democrats’ Narrative and from Twitchy, ‘It’s THE LAW’: Georgetown law professor Randy Barnett SHREDS House Democrats and their case in EPIC thread on due process

Spare me the lamentations of those who remained silent when the House Intel committee conducted secret one-sided impeachment proceedings unauthorized by House resolution, without counsel for the President, etc*, because the Senate will decide on the basis of this record evidence.
— Randy Barnett (@RandyEBarnett) February 1, 2020

Roger Kimbal at AmGreat, ‘Walls Are Closing In’ on the Democrats and Matthew Walther at Da Week on Cocaine Mitch, Mitch McConnell does it again. Insty, DOWN TO SEEDS AND STEMS AGAIN: Democrats reduced to claiming impeachment will be “Permanent Asterisk” for Trump.” "Well, it’s an asterisk for somebody."

Dan Gainor at Fox, Anti-Trump news coverage of impeachment trial was Super Bowl of media bias. From Ross Douhat (cited by Hot Air), There’s Only One Way To Remove Trump, an election. That's about at bad as the NYT will tolerate.

Sundance watches the Sunday Talk shows so you don't have to waste your time sorting through the chaff, Steve Bannon Discusses “The Crime of the Century”, the “Soft Coup”… 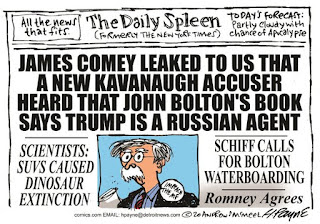 And a preview of this week's complaints by Democrats at CNN, Trump administration reveals it's blocking dozens of emails about Ukraine aid freeze, including President's role and Wapoo, Justice Department acknowledges 24 emails reveal Trump’s thinking on Ukraine. Wapoo EdBored, Ukraine wouldn’t do Trump’s dirty work. So GOP senators are doing it instead. But from sundance, Report: John Kerry Concerned As Joe Biden Plummets – Both Had Sons Cash-in on China/Ukraine…

Jim George at Ricochet reviews the Flynn prosecution and says Thank You for Your Service, Gen. Flynn.

At RCP, Rand Paul: Alleged Whistleblower, Friend Plotted For Over A Year To Bring Down Trump. Probably 2.5.

Finally, Karen Townsend at Hot Air reports that Bill Maher says What Democrats Need Is A Fighter Like… Avenatti. But it's so hard to run from jail.

The Wombat has Rule 5 Sunday: Carole King and FMJRA 2.0: Monolight up on time and under budget.