Some Russiagate to Start the Week

The crisis du jour is still the foofarah surrounding the recent House of Reps briefing wherein the House intelligence committee (an oxymoron if there ever was one) was apparently told by one Shelby Pierson that the Russians had developed a preference for Donald Trump in the upcoming election. It may well be true; all the Democrats running are crazy or senile; in some case both. The Sanders campaign was also given a warning briefing that Putin was helping Sanders. Anyway, the AP reports that Trump says he was not told that Russia was helping Sanders, so either someone in his administration is not bringing this stuff up to his attention, or someone is lying. It could go either way. Then, according to WaEx, Trump accuses Adam Schiff of leaking information that Russia is trying to help Bernie Sanders campaign, which would be a reasonable assumption given the uni-partisan leakage from the committee in the past. The WaPoo titles this story Trump makes veiled threat toward Schiff over classified briefing on Russian 2020 election interference

Somebody please tell incompetent (thanks for my high poll numbers) & corrupt politician Adam “Shifty” Schiff to stop leaking Classified information or, even worse, made up information, to the Fake News Media. Someday he will be caught, & that will be a very unpleasant experience!
— Donald J. Trump (@realDonaldTrump) February 23, 2020


Putin may or may not be a master of Seventh Dimensional Chess but right now he's just having fun playing 52 Pick-Up.


Bernie Sanders briefed by U.S. officials that Russia is trying to help his presidential campaign

And once again the US is losing. Help both sides, de-legitimize the eventual winner, let the losers have a permanent temper tantrum - it worked once for Putin, it will work twice.

My secret hope is that the US has a counter plan which involves Putin laughing so hard he has a stroke and keels over. I also query the conclusion of the US intel services that Putin would prefer to see Trump win. A Sanders (or Warren) fracking ban would be a boon to the value of Russian oil.

But other people familiar with the meeting said they were told the Kremlin was looking to help Trump's candidacy. The people spoke on condition of anonymity to discussed the classified briefing.

Well, what do you know…. All of a sudden today, anonymous intelligence officials are reporting to CNN that Ms. Pierson “overstepped” her position, was “misleading” in her briefing, and “mischaracterized” the underlying intelligence. Imagine that.
. . .
Why would Shelby Pierson and Joseph Maguire intentionally blindside the White House?

The briefing was obviously spun by HPSCI Chairman Adam Schiff and democrats on the House intel committee; and there was no intelligence presented during the briefing to support the claims made by Pierson, Democrats and media. 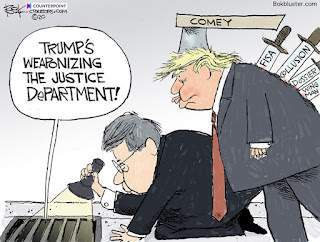 
The paper first attacked Patel in February 2018's “Main Author of Secret Memo, Is No Stranger to Quarrels,” as “a lawyer who has sometimes run afoul of the rules.” The killer line:


Democrats, led by Representative Adam B. Schiff, the ranking minority member on the committee, were scathing in their criticism of both the report and the decision to release it to the public.

This article says that @RichardGrenell just hired “an expert on Trump conspiracy theories.”

The evidence? The aide wrote “a politically charged memo” that “was widely criticized as misleading.”


My suspicion is a quiet agreement exists between the DOJ/FBI and FISA Court. It appears the DOJ is trying to get the FISA reauthorization passed before the FISC declassifies the corrective action outlined from the prior court order.  This response would also include information about the “sequestering” of evidence gathered as a result of the now admitted fraudulent and misrepresented information within the FISA applications.

Also from Sundance, Sunday Talks: Lindsey Graham -vs- Maria Bartiromo… and is unconvinced that Lindsey will follow through with his promise (or are they threats) to look into FISA abuse.

At WaPoo, Margret Sullivan drops the mask of objectivity, We have entered the Trump Unbound era — and journalists need to step it up.


I often talk to news consumers — citizens by another name — who insist that they want “just the facts” reporting. They’re understandably frustrated that they can’t seem to find that when so many news organizations, especially cable news, seem to have chosen political sides for commercial purposes. They want news that is unbiased — that doesn’t come with a side helping of opinion. Just tell me what happened, they say. I’ll make my own decisions about what it means.

That sounds good in theory. In practice, every piece of reporting on national politics is unavoidably the product of choices: What’s the angle? Who is quoted? What’s the headline? How much historical context is there? How prominent is it on a front page, a home page, an app?

It’s in these small but crucial decisions that mainstream media often fails its audience: We simply are not getting across the big picture or the urgency. This happens, in part, because those news organizations that haven’t chosen up sides — those that want to serve all Americans — fear being charged with bias. . . .And so they soften the language. They blunt the impact.

And in old news, Rowan Scarborough from WaT  reports on The curious political cases where Democratic AGs jumped in to meddle. It's only bad when Republican AGs supervise their underlings, especially when those underlings are part of the resistance.

From Fox, Judge Amy Berman Jackson fires back at Roger Stone, denying request for her recusal. I expect this to be appealed all the way to the Supreme Court. Even Trump hater Judge Napolitano thinks it was a horrible miscarriage of justice.

Andy McCarthy, Stone Sentencing Ends Russia Collusion, Part I "But the Democrats are cooking up an even weaker sequel"


Judge Jackson is too smart not to know that when she pregnantly claims Stone was “covering up for the president,” that will be twisted into a suggestion — from a federal court, no less — that there really was Trump–Russia collusion. No wonder the judge had such praise for the trial prosecutors. She was taking a page out of the Mueller playbook.

The Mueller prosecutors knew they had no evidence of a Kremlin–Trump conspiracy. The indictments they filed against Russian actors elucidate that Moscow neither needed nor wanted American collaborators. But the politicized probe featured the Mueller two-step: First, charge process crimes against such saps as Stone, George Papadopoulos, and Michael Flynn; then, rather than writing concise charges, as prosecutors typically do in such mundane cases, exploit the opportunity to craft extravagant collusion narratives. In each indictment, we’re treated to pages and pages of big wind about Russians and WikiLeaks and emails; then, you flip to the end only to find that there’s no rain — somebody lied about the date of a meeting, or threatened a dog, or just did his job as incoming national-security adviser.

And now we’re on to Russia Collusion II. Already it is shaping up like the original: a sprawling, incoherent, implausible mess of a plot, with a B-movie cast and the same ending — Trump gets impeached, this time probably in 2022. Another bomb, but hopefully the attorney general will stick around to see it.

And in the schadenboner department,  Michael Avenatti moved to different jail after hitting ‘breaking point’. It couldn't happen to a nicer guy. I think he has mental issues, though.
Posted by Fritz at 10:09 AM