At Least They Weren't in the Nude

Because I don't think a nude protest would help their case. Watermen take to the streets to protest


About 100 members of the Talbot Waterman’s Association lined up in front of the Easton Shore Land Conservancy to protest in the early morning hours of Wednesday, Feb. 26.

The group is taking issue with the conservancy’s and Chesapeake Bay Foundation’s lack of effort to work with the watermen in a way that allows them to make a living, they said.

The evening before the protest, a group of about 200 watermen gathered in Annapolis to address Senate Bill 948, sponsored by state Sen. Paul G. Pnsky, D-22-Prince George's, that would reduce unlimited tidal fishery license holders’ ability to harvest oysters.

“I think it was a great turnout by the watermen,” President of Talbot Waterman’s Association Jeff Harrison said. “I think we did impress some of the senators and did a good job of trying to kill SB 948. 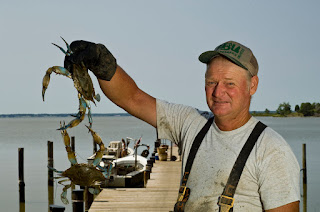 This appears to be about the same issue that I posted about a few days ago, a law that would force watermen to pay a fee to keep their oyster licenses working, even if they were not harvesting oysters in a given year.


“There is a chance they would work with them, but every time we face up with them and try to help them out, they just do what they want,” Harrison said. “We don’t want war with them and we just want people to know that we aren’t the problem here.”

A.J. Metcalf of the Chesapeake Bay Foundation said the organization is not deaf to what the watermen have to say.

Metcalf said that with the consensus-based oyster fishery management plan law put into place this year — after the legislature overrode Gov. Larry Hogan’s veto — watermen will play a major role in that process as their representatives and those of seafood sellers make up 60 percent of the new commission’s membership.

A "consensus plan" for oyster fishing sounds like two lions sitting around with a lamb to decide what's for dinner. 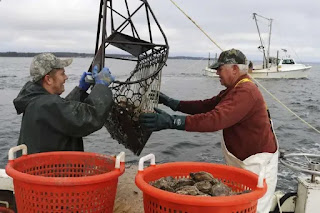 “The Chesapeake Bay Foundation has been around long enough that they have convinced people that the only way to save the bay is to get rid of the watermen,” Harrison said. “We don’t know why they are trying to change the identity of the state.”

Harrison said that if this pattern keeps up, in 10 years local seafood will be gone and it will be imported from overseas.

If watermen had their way completely, it would all be long gone.
Posted by Fritz at 5:28 PM