Yesterday was the day for closing arguments, and "debate" by Senators. As you might expect, Adam Schiff got up and tried to shame the Senate by arguing that "'duty demands' a conviction", that “You Are Decent. He Is Not Who You Are”, that Republican Senators Admit “the House Proved Its Case”, and most bizarrely Trump Will Sell Alaska To Russia If We Don’t Impeach Him. If you can make that New York, and the whole Left Coast instead, I'm down with that. Think of it as trading Queens.

The reviews are in as VDH at AmGreat, Up Schiff’s Creek, and as Locommotive Breath notes Allegedly Mentally Ill Adam Schiff(D) Desperately NEEDS an Intervention, or maybe just better drugs. Dr John at Flopping Aces Adam Schiff’s lifetime of lies

Rep Val Demings, argued Only Guilty People Assert Their Rights And Insist On Judicial Review, Or Something. J/L Johnson at AmGreat, Who's to Blame for Pelosi-Schiff Impeachment Insanity?


During the Franco-American "Quasi-War" of 1798, the officers of the 1st brigade, 3rd division of the Massachusetts militia informed President Adams that they were ready to answer duty's call at any time — and at their own expense. Accordingly, on 11 October 1798, Adams penned his now famous reply in which he complimented the unit's readiness and commitment but assured them that France's military power did not pose an existential threat to the nation. The threat to the country, Adams explained, would come not from a cannon's shot or shell, but from an enemy that was even more powerful and difficult to control — the American people themselves.

On the other hand, Trump’s Lawyer Tells Senate: ‘The House of Representatives Is Not Above the Law’ and ‘Didn’t Follow’ It 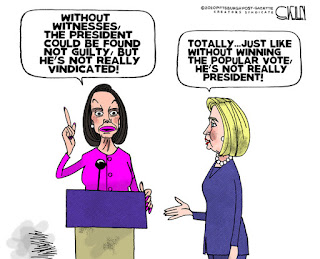 Signalling a likely no vote on removal to save his skin in West Virginia, Manchin, swing-vote Dem, urges censure over removal for Trump’s Ukraine actions. “It Was Not A Perfect Call”: C’mon, Let’s Censure Trump, Says Joe Manchin. Murkowski: Yes, What Trump Did With Ukraine Was Inappropriate, but signals a no vote.

Josh Hammer, NYPo, This whole pathetic impeachment effort was worse than a waste of time. But wait, it has provided endless hours of entertainment and Schadenfreude Has Never Felt So Good as CNN’s Chief Legal Analyst Waves the White Flag. Yeah, let's shoot the survivors, too. MOTUS, Impeachment, Super Bowl, Brexit and Groundhog Day. Oh My!

Via the Wombat's In The Mailbox: 02.03.20 Power Line has more on Professor Gerhardt's threat to have Trumps lawyers brought up on bar charges.


This time, the professor is probably right. Bar complaints, however frivolous, are likely to be filed against one or more of Trump’s lawyers.

It’s hard to go wrong betting that the left will engage in authoritarian tactics. The modern left is hostile to any right that stands in the way of its quest for power — be it the right to free speech, to free exercise of one’s religion, or to a vigorous legal defense.

Ethics charges against members of Trump’s legal team would be baseless. As Jonathan Turley observes, in litigation, lawyers typically present one-sided renditions of the facts that include claims the other side considers false and that may, indeed, be false. But even if a judge or jury rejects these assertions of fact, we don’t hit the losing lawyers with bar charges.

Turley also notes that the Washington Post gave Adam Schiff four Pinocchios for his denial of any contacts between his staff and the whistleblower. If bar complaints are to be filed in connection with the impeachment, Schiff should be the subject of one.

Well, if it's going to be that way, Rand Paul wants to Investigate Likelihood Six Members of Adam Schiff Staff and NSC Planned Impeachment in Advance….

Liz Vaughn at Red State, Rand Paul Points Out an Interesting Truth About Eric Ciaramella, but nothing devoted readers won't know. News Thud, Graham Says Senate Intel Committee Plans to Call the Whistleblower.  Ace, Lindsey Graham Claims the Senate Intelligence Committee Will Call Fake Whistleblower to Testify "Lindsey is always sayin' he's gonna do this and he's gonna do that, and then he does a whole bunch of nothing."

The Dersh on Trump’s Likely Acquittal: ‘It’s the Fault of Nancy Pelosi and Others for Failing to Charge an Impeachable Offense’. Well that and the fact that he didn't commit one. Jonathon Turley, How The House Lost The Witnesses Along With The Impeachment. Rabbi Fischer, Why the Senate Passed on Witnesses. It was just a stall for more time to try and dirty Trump. They're not all suckers. Just Romney. Tom Cotton thinks Impeachment for Schumer Not About Getting Trump Out of the WH — About Getting Susan Collins Out of the Senate. Well yes, they can have more than one evil motive. 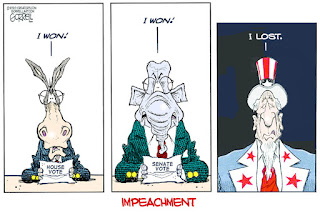 Y’all are a bunch of insane clowns is what y’all are. This hysteria is just too much and too insane.

The GOP needs to be burned down because it refused to toss the guy you didn’t vote for?

The constitution no longer has any weight, merit, or meaning because you lost a political fight?

Stop being stupid. All your talking points have been as stupid as the Republican talking points. The President has turned you people into what you think he is. 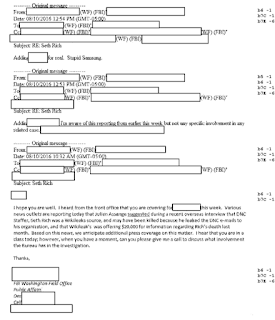 According to Craig Murray, The FBI Has Been Lying About Seth Rich. Hints from some Strzok memos.


Before I analyse these particular emails, I should make plain that they are not the major point. The major point is that the FBI claimed it had no records mentioning Seth Rich, and these have come to light in response to a different FOIA request that was not about him. What other falsely denied documents does the FBI hold about Rich, that were not fortuitously picked up by a search for correspondence between two named individuals?

To look at the documents themselves, they have to be read from the bottom up, and they consist of a series of emails between members of the Washington Field Office of the FBI (WF in the telegrams) into which Strzok was copied in, and which he ultimately forwarded on to the lawyer Lisa Page.

From Paul Sperry's Notebook at RCI, Something to make you go hmmm, Theft Near White House of Investigative Reporter John Solomon's Laptop


On the night before the Senate impeachment trial began, someone broke into veteran Washington investigative journalist John Solomon’s car, which was parked near the White House, and stole his laptop, according to a D.C. Metropolitan Police Department report obtained by RealClearInvestigations.

The computer contained notes on Ukraine and former Vice President Joe Biden and other sensitive information, Solomon said in an interview. He said he was preparing to launch a new podcast and news site at the time.

Though the laptop has since been recovered, the investigation is still open. “The case has been assigned a detective and is under investigation,” MPD spokesman Sean Hickman told RCI.

The Secret Service is also involved in the matter, which appears suspicious. Break-ins are relatively rare in the high-security area where the crime occurred, just outside the White House perimeter, and a sophisticated device appears to have been used to get into the vehicle.

In the early evening of Jan. 20, the police report states, Solomon’s Apple MacBook laptop and computer bag, valued at around $1,800, were stolen from his 2019 Toyota SUV parked at 1776 F St. NW, across from the White House’s Eisenhower Executive Office Building. No windows were broken, and there were no other signs of forced entry. Authorities suspect the thief or thieves used an electronic jamming device to open the car door lock.

Solomon said that, other than the bag, nothing else was stolen from his car, including cash he used for the Metro.

The computer and bag, which also contained his U.S. Capitol press security badge, were discovered the next day nearly a block away from where his car had been parked. The contents of the bag had been dumped out on a picnic bench near the FDIC building. The location had no security cameras, so there is no known video surveillance footage that can be reviewed. Authorities described it as one of the few “dark spots” in the area.

Solomon, who noted that an iPod was missing from his bag, says he is working with computer forensics experts to determine if any of his laptop information was exploited or if his hard drive was scanned within the period the laptop went missing.

“It's a pretty professional job,” he said of the break-in, "but it's probably just a coincidence.”

“It was probably just a street criminal searching for pass codes,” he added. "Or it could be someone searching for my Ukraine stuff. We don’t know at this point.”

Sharyl Attkisson might know some names of people to check.
Posted by Fritz at 9:59 AM