Reason #6427 that Trump was Elected 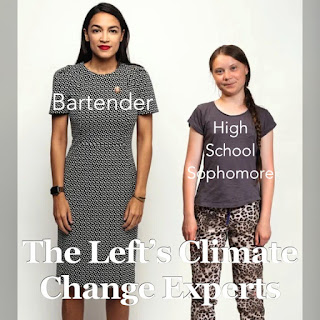 
After three years of apocalyptic wailing and gnashing of environmentalist teeth over President Trump’s decision to withdraw from the job and economy killing Paris Climate Accord, it is ironic that the one country that faces the brunt of criticism from climate change zealots such as Greta Thunberg is leading the world and the European Union in lowering emissions and promoting cleaner energy, such as natural gas, all the while not hurting the economy:


Despite shrieks of terror from the left about how President Donald Trump’s presidency threatens the existence of Earth and thus mankind, the fact is that under his leadership, America continues to lead the world in total emissions decline.
“The United States saw the largest decline in energy-related CO2 emissions in 2019 on a country basis -- a fall of 140 [million tons], or 2.9%, to 4.8 gigatons],” the Paris-based International Energy Agency (IEA) revealed in a report Tuesday.
The entire European Union, which consists of 28 nations, meanwhile only lowered emissions by 160 million tons total, or roughly 5.71 mt per nation.

This achievement by the United States occurs amidst an economic boom led by President Trump's unshackling of the fossil fuel industry, including ending the war on coal. While the European Union achieves its reductions through draconian energy mandates and economic stagnation, the U.S. has unleashed hydraulic fracturing or fracking to produce abundant oil and natural gas, a fossil fuel that has made our emission reductions happen without laying waste to the economy with job-killing regulations as the Europeans have done and Democratic Socialists like Bernie Sanders, Elizabeth Warren and, yes, Michael Bloomberg want to do.

More hopefully, it will become a reason he will be reelected.
Posted by Fritz at 4:57 PM