It's an old article that came up in Facebook. Thanks Mike! 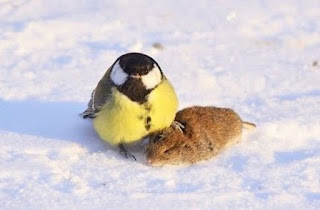 Predatory Songbirds: the case of the murderous tits


A few months ago, I saw a photo of a European songbird, the great tit (Parus major), proudly standing over a dead vole, surrounded by snow on twitter. I was astonished to learn that it had killed this vole — I had thought that Great Tits typically eat seeds and small invertebrates. The observer described how the bird had only eaten the vole’s brain and left the rest for other scavengers. Apparently, this type of behavior is not so surprising, or even unusual, for this species.

Though great tits do have a ‘typical’ songbird diet for most of the year, harsh winters bring out their vicious side of when food resources are scarce. Tits are documented carrion scavengers and there are historical anecdotes of these birds eating the tissues of recently hanged people in Europe.

These seemingly innocuous birds have been documented systematically searching out and preying upon hibernating bats in Hungarian caves; there are videos of these tits attacking defenseless bats by ruthlessly pecking their skulls specifically to eat their brains. Great tits will prey on other similarly-sized songbirds too — there’s a shocking video of a tit assaulting a European Chaffinch and pecking it to death under a bird feeder. The murderous tendencies of this species and its preference for brains was noted by 20th century ornithologists, and more recently, a wildlife photographer documented a grisly scene of almost a dozen songbirds killed by a couple of great tits in Finland. This predatory behavior is out of necessity though: in experiments related to the hibernating bats, tit predation decreased substantially when sunflower seeds and bacon was provided near the cave entrance.
. . .
As an ornithologist, these observations and studies captivate me. Birds have been studied for thousands of years: inferences of their breeding biology are evident on Egyptian frescoes and were mentioned in one of the oldest books in the world, the ancient Chinese text “Book of Changes”. However, we are still learning basic facts about what they eat.

I can't say I'm shocked, when it comes right down to eating or starving, a lot nominal vegetarians will eat animal meat and organs, especially if it's not too much work or too dangerous. It's rich source of protein, needed fats and calories. We used to feed cows cow scraps, until we figured out it was a way to spread mad cow disease.

Great tits are an English songbird, related to our own Chickadees. You know where else in England there are great tits? Rose Jones, Lucy Pindar and Stacy Poole

You knew I would, didn't you?

Wombat-socho has Rule 5 Sunday: Mapy Cortes up at The Other McCain.
Posted by Fritz at 5:35 PM