So the great impeachment battle as at last over, and Donald Trump is striding around the battlefield, shooting the wounded. First, the rumors, At Da Wire, Trump Administration Looking To Take Action Against Alexander Vindman. Ace, White House Pondering Shrinking the NSC, Starting With Firing the Pudgy Fat-Ass "Lieutenant Colonel" Vindman. Then it actually happened, Matt Margolis at PJ Media, YOU'RE FIRED! Lt. Col. Vindman Loses NSC Job, Escorted from White House sundance at CTH, Keeping Families Together – Yevgeny and Alexander Vindman, Brothers in the Impeachment Coup Effort, Escorted Out of White House…, Ace, Self-Righteous Pudgebucket and Short-Lister for Ukraine's Minister of Defense LIEUTENANT COLONEL Vindman Is Escorted Out of the White House by Security, Twin Brother Shitcanned Too, Via The Wombat's the Weasel Zippers:  LTC Vindman & Twin Brother Escorted Out Of White House, Reassigned In The Mailbox: 02.07.20. And a little later, AllahPundit whined, Alex Vindman Removed From NSC Post, Escorted Out Of White House; Update: Sondland Out Too and sundance, GTFO – Ambassador to EU, Gordon Sondland, Removed….  Twitchy, Ambassador to the EU Gordon Sondland ALSO BOOTED . Insty, IF ONLY IT WERE TRUE: 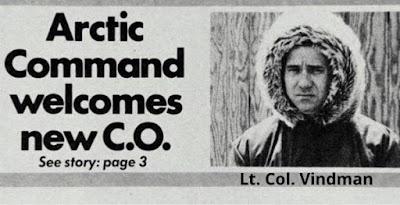 The WaPoo is beside itself, Trump ousts Vindman and Sondland, punishing key impeachment witnesses in post-acquittal campaign of retribution


President Trump on Friday punished two witnesses who testified in the investigation that led to his impeachment, removing them from their posts in an apparent campaign to exact retribution on his perceived enemies in the wake of his acquittal in the Senate this week.

The White House ousted Lt. Col. Alexander Vindman from his post on the National Security Council and recalled U.S. Ambassador to the European Union Gordon Sondland, moves that were quickly condemned as vindictive and an attempt to intimidate government officials who speak out against Trump.

These guys are all nominally "Presidential" advisors, and Trump just can't trust them. Why should he have to keep them?  When you strike at the King . . . Joe Biden wants to give Vindman a medal. Matt Margolis, Joe Biden Claims Lt. Col. Vindman Deserves a Medal and 'Not Rush Limbaugh'. When you get to be Preznit Joe, you get to pick. Finally, George Parry at AmSpec, Saving Private Ciaramella "The alleged “whistleblower” may get the whistle blown on himself.". Yep, I'm sure it's coming.

Devin Nunes is an *actual* profile in courage. This man took on nearly everyone in DC, including many powerful people in his own party, to fight to bring Americans the truth about the Russia collusion hoax and FISA abuse. Completely vindicated and our media LOATHE him for it. https://t.co/5qYK8vvkWc
— Mollie (@MZHemingway) February 7, 2020 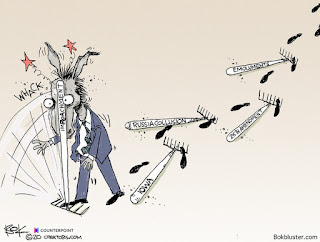 Roscoe Davis, This is the month of February, the month we all hope that this nightmare of political assassination of a genuine Hero. I'm going to throw out my theory based on the filings of another Hero @SidneyPowell1 in her fight to clear @GenFlynn of the wrongdoings against him.. John Solomon, at a new site, Just The News reminds us Key witness told Team Mueller that Russia collusion evidence found in Ukraine was fabricated.. More bad news for the Deep State Resistance from Jerry Dunleavy at WaEx, FBI Director Christopher Wray: Steele dossier and former FBI employees are being scrutinized, but I don't really trust Wray to go after his own. He'll write some new rules, which the upper echelons at the FBI will be free to ignore until next time. 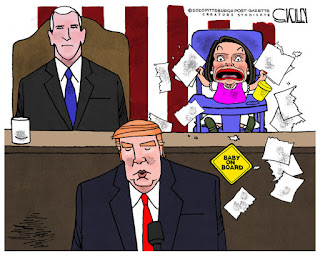 On the shampeachment itself, there's way more heat than light. Did you hear Trump gave a non-contrite speech at the national Prayer Breakfast, and has the liberal media tearing its hair out?  Just read WaPoo. On second thought, don't. Stacy McCain, Trump Does Impeachment Victory Dance, Slams Democrats, Media as Liars. Sundance has the  Transcript of President Trump Remarks on Impeachment Acquittal… Via the Wombats In The Mailbox: 02.06.20, Kimberley Kaye at LI, Trump Takes Victory Lap At White House Event and Leftist Media in Complete Meltdown After Trump’s Acquittal Speech. CNS News, Trump Celebrates Impeachment Acquittal: ‘We Went Through Hell Unfairly’. Justin Caruso, Da Caller notes how ‘Trump Ends Speech With Message To Melania, Barron — They Stuck With Me’. He had the audacity to thank his family? Now that's evil incarnate! Kurt Schlicter at Town Hall wallows in Three Glorious Days of Democrat Agony From Fox, Greg Gutfeld fires back at critics of Trump's post-impeachment remarks: 'I would be screaming'

From Da Wire, Democrat Senator Mazie Hirono: Trump ‘Not Acquitted’. CNN Rips Her, She Doubles Down but from Da Blaze, Republicans plan to expunge impeachment of President Trump if they take back the House "Impeached forever? The GOP says not so fast." I hope they do.

Tyler O'Neil at PJ Media is Refuting Mitt Romney's Historic Argument to Remove Trump in Impeachment. If he needed more witnesses on Monday, how could he be so certain on Wednesday? Because the witnesses were to be part of the show trial of his enemy. From Paul Goldberg at News Thud, Romney Facing Calls to Be Removed from the Republican Party. I don't think there's really a mechanism for that. Tar and feathers might be better. Bert Peterson at AmThinks thinks about Mitt Romney's Oath before God. He's dubious. I just found it convenient that God told Mitt to convict the guy he already hated. But Ace notes A sudden new respect for a former hated enemy, Partisan Liberal Democrat "Danang Dick" Blumenthal says  Mitt Romney's Glorious Speech Brought Literal Tears To My Eyes

On Sloe Joe and Ukraine, Ace GOP Senators Launch Investigation Into Hunter Biden.  Da  Wire,  Senate Gets ‘Highly Sensitive’ Hunter Biden Records After Letter To Money Laundering Unit In Treasury Department. But will they leak? Schiff would. Breitbart, Schweizer: Travel Log Investigation ‘Ought To Be Extended Beyond Hunter Biden.’  "to look at his brothers and look at his son-in-law.” Da Blaze, Glenn Beck unveils money laundering scheme linked to Hunter Biden and Burisma. Sometimes I feel bad for Hunter's poor choice in fathers. Then I think about $50k a month in kick backs for protection.
Posted by Fritz at 11:17 AM