“Mr. Stone and his defense team are diligently reviewing the newly reported information to determine any appropriate next steps,” said attorney Grant Smith, who did not refer to the juror by name.

Hart’s role as the jury foreperson became publicly known Wednesday when she confirmed to CNN that she had written a Facebook post defending the prosecutors in Stone’s case.

Of course, this is up to the judge, who has demonstrated if not more, an extreme exasperation with Roger and his antics. Is there a level of appeal beyond her? Probably. With luck, Roger can run out the clock.

“The President has never asked me to do anything in a criminal case.” A.G. Barr This doesn’t mean that I do not have, as President, the legal right to do so, I do, but I have so far chosen not to!
— Donald J. Trump (@realDonaldTrump) February 14, 2020

and asks Are people understanding Barr's "impossible for me to do my job"? "I'm tired of reading all the articles about it. Or, more accurately, I'm averse to reading much of anything about it. But I do assume that Barr is helping Trump. Deliberately, of course." WaPoo, McConnell, top Republicans support Barr's remarks on Trump tweets. Critics are suspicious.  NYT at MSNBC complains that Trump Claims ‘Legal Right’ to Interfere in Justice Dept. Cases. WIBC, There Is No Roger Stone Firestorm. There's Just Angry Democrats.

From Breitbart, GOP Rep. Meadows on Roger Stone: I ‘Stand By’ Barr, Trump — ‘The Right Thing to Do’. Sundance at CTH reports that the  Full Transcript of ABC Bill Barr Interview Shows Most Content Not Included In Broadcast Interview… "Approximately two-thirds of the interview was never broadcast.  Additionally, major sections of answers were completely cut out (chopped up/edited) after the question(s) was/were asked." All the news that fits the agenda.

In which you might find Barr: I Agreed With The Prosecution Of Roger Stone And Found It “Righteous” (AllahPundit), which brings us to McCabe, an ex-FBI official targeted by Trump, not charged (AP), the Peacock, DOJ drops leak case vs. McCabe, judge said White House involvement like a 'banana republic' and AllahPundit, Whoa: DOJ Won’t Charge Andrew McCabe. So we have one person charged for perjury, with a presumed sentence of multiple years in prison, and a DOJ high muckety muck commits a similar crime, and is not even prosecuted. Ace, There Is No Law In America; Why Should We Be The Only Ones to Pretend There Is?. From Buck Sexton,


If the libs like you- and especially if you hate Trump- the law does not apply.

Was true for Hillary, and now we see is true for McCabe.

This makes a mockery of our legal system, and divides the country in irreparable ways

Sundance complains about Two-Tiered Justice – DOJ Informs Andrew McCabe He Will Not Be Prosecuted for Lying to FBI Investigators (3 Times, Under Oath)…

Matt Margolis at PJ Media claims a BOMBSHELL: U.S. Atty. John Durham Is investigating Whether Obama Admin Hid Evidence of Russian Meddling. Would anyone really be shell shocked? And via Capt. Ed at Hot Air, NYT complains that  Durham is Digging Into CIA Officials’ Motives For Russia-Collusion Analysis


Last night’s analysis that Durham seemingly intends to target high-ranking intelligence officials for manipulating information and protecting other sources depends on an assumption that we have the full set of questions — and comprehend all the motives for asking them:


Trump administration officials investigating the government’s response to Russia’s election interference in 2016 appear to be hunting for a basis to accuse Obama-era intelligence officials of hiding evidence or manipulating analysis about Moscow’s covert operation, according to people familiar with aspects of the inquiry.

Which “people” would that be? The people running the inquiry, or the potential subjects and targets of the probe? Needless to say, that matters as to whether we get a complete picture of what Durham is doing, or whether we’re just getting a preview of the defense case down the road.

Ace, New York Times: John Durham is Probing How John Brennan Put Together His Coup Effort, and That Is a Dangerous and Unamerican Violation of the CIA's Privacy!!!!


That's pretty much the spin.

The sourcing from this obviously comes from Brennan or other CIA figures involved in cooking up the plan to use the dossier as a pretext to open a criminal file on Trump.


It is important to remember how critical the Russian interference narrative is to the activity that took place in 2016. If you take away the mortar, the building collapses. If the concrete evidence is not there to support the intelligence claims of 2016/2017, then all justification for the downstream “investigations” is lost.

Without the Russia narrative, those who weaponized intelligence for political surveillance are naked to the world. The Russia narrative is essential for their justification of everything. In a world with a functioning media the high importance of a key detail would mean even more scrutiny on that detail was warranted. Alas, in the world of orange-man-bad, the concept of a functioning media is as visible as a rotary phone.

The two-year investigation that generated the Weissmann/Mueller report contains claims that Russia hacked the DNC servers as the central element to the Russia interference narrative in the 2016 U.S. election. This claim is perhaps the sketchiest.


Anyone who has followed DC for a while could see this one coming a mile away… including the synergy of self-interested timing. Catherine Herridge of CBS reports on a ‘tick-tock’ letter from Senator Lindsey Graham to AG Bill Barr where Graham announces his request for witnesses. The Graham list is an assembly of various DOJ/FBI officials who participated in Crossfire Hurricane and the fraudulent FISA application(s).

The timing of the letter, alluding to some possible hearing at some possible later date, follows a DC pattern. [Chaff and Countermeasures] In essence, cover for visible inaction; an attempt to convince people to put down the pitchforks.


As the news comes in today that "Michael Avenatti guilty on all counts in Nike extortion case," there's a lot tweeting of this montage from the days when the media inflated Avenatti into a Trump destroying folk hero:

AllahPundit reports Falwell Jr: I’ve Heard Speculation This Week That Romney Is Positioning Himself To Be VP To A Democratic Candidate. Well, he might win Utah. Byron York at WaEx asks Will impeachment play in November?


The Democrats who impeached President Trump knew they did not have a prayer of removing him from office, but they also knew impeachment might have another effect: to weaken the president and reduce his chances of winning reelection in November.

It was an unprecedented plan, an election-year gambit in which Democrats used the House of Representatives's constitutional power of impeachment as perhaps the most audacious opposition research maneuver of all time.

But will it work? One: Will voters even remember impeachment when Election Day comes around in nine months? And two: If they do, which way will impeachment cut? Will it help Democrats or help the president?

It is often remarked that news is happening at a never-before-seen pace in Trump's Washington. A story that in an earlier era might dominate coverage for weeks is supplanted by an equally big story a day later and by another a day after that. It can all blend together and fade in the voters' minds.

On the other hand, impeachment was big, and. even if it does fade from memory, Trump appears determined to keep it alive. 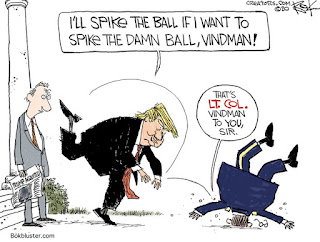 
When we consider that Lt. Col. Vindman was carrying out what he believed to be his role; and when you overlay his military purpose; and when we accept Vindman was assisting CIA agent Eric Ciaramella in constructing his dossier to remove President Trump; and when we stand back and look at the aggregate interests involved; and when we consider there was ZERO push-back from the ranks of military leadership, specifically the Joint Chiefs of Staff; and when you accept Vindman was simply allowed to return to his post inside the White House – where he remains today; well, the alarming aspect increases in direct proportion to the definition of the word: “coup”.

Beyond the debate about the optics of the “coup“, within the testimony of Lt. Col Vindman, the NSC witness readily admits to understanding the officially established policy of the President of The United States (an agreement between President Trump and President Zelenskyy), and stunningly admits that two weeks later he was giving countermanding instructions to his Ukrainian counterpart to ignore President Trump’s policies. 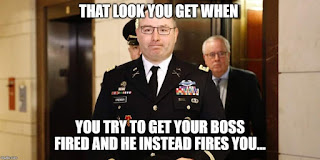 Sebastian Gorks insists Vindman Is Not Enough "God willing, should Donald Trump win reelection to a second term as our 45th president, his whole legacy will stand or fall on one question: Will he begin to drain the swamp in earnest or not?" At Da Wire, John Kelly Rebukes Trump For Firing Of Col. Vindman; Trump Fires Back, Breitbart, John Bolton: ‘Conservatives’ Need to Reject Trump Attacks on ‘Honorable’ John Kelly "“John Kelly is an honorable man,” Bolton wrote on Twitter. “John and I have disagreed at times, as is commonplace at senior government levels, but he has always served his country faithfully.” Which doesn't make him right all the time.

J.D. Rucker Ricochet asks Can we talk about Eric Ciaramella?


You can’t talk about him on YouTube, as Senator Rand Paul learned.

You can’t talk about him on Facebook, as Ken LaCorte learned.

Mainstream media, including Fox News, has a “Voldemort Rule” in place. Guests are told He Who Shall Not Be Named is anathema and cause for instant excommunication from cable news forever if his name is uttered.

Twitter has remained Ciaramella-agnostic thus far, though some have reported there’s an algorithmic suppression of Tweets that tag him. I’ve written extensively about Eric Ciaramella on my site, but we’re not Fox News. Not yet.

while Red State reports that Rand Paul Plays YouTube Like a Fiddle Over Their Attempt to Censor Him. The Streisand effect.

Da Week, Giuliani claims he can 'prove' a 'Democratic scam' in Ukraine with iPad full of 'reports' he never actually shares

.@RudyGiuliani says there is more to this #Ukraine corruption scandal than the #Bidens - #Giuliani says he has the proof, and he's ready to EXPOSE the corruption - and that's why people are after him, watch: #TrishRegan pic.twitter.com/sjYstoyUdE
— Trish Regan (@trish_regan) February 14, 2020

And last, the WaFreeBee asks and answers, Where’s Hunter? Until Recently, On the Board of the Left’s Premier National Security Network . Hey, coke head deadbeat dads need representation too! Capt. Ed at Hot Air VIP reports Backfire: Majority Finds Hunter Biden’s Ukraine Work “Inappropriate” In Post-Impeachment Morning Consult Poll. You can't fool all of the people all of the time.
Posted by Fritz at 12:07 PM