Oh No! We're All Gonna Drown

But not too soon. So, apparently another press release went out touting an increase in the rate of sea level rise, focusing on Virginia, New Data Shows Sea Levels Are Rising Faster in the Chesapeake Bay Region


Scientists at the Virginia Institute of Marine Science have been gathering data on sea level rise from tide gauge stations around the United States, including one at the mouth of the James River in Norfolk.

Data for the report cards goes back more than 50 years and has been used to confirm sea-level is rising along U.S. mainland Coasts and Alaska.

Researcher Molly Mitchell says the more years of data they have the better they can see what's going on. "We know the sea-level has been rising but the rate of rise was so small that it was hard to recognize that it was increasing," Mitchell says. "As we've gotten more and more data we're getting to a point where that increase is becoming more noticeable in the tide records."

So back in the 1950s and 60s sea levels were rising less than one-eighth of an inch, hardly noticeable. But, that slow acceleration of sea level rise works a bit like compound interest, building up over the years.

So here's the data they used, from Sewall's Point VA, 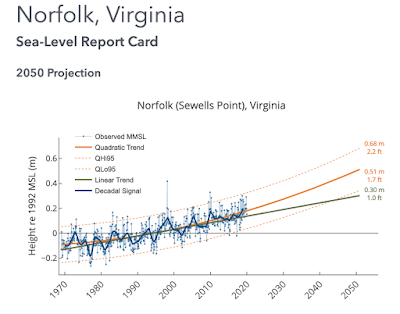 Well, maybe, but why would it be a quadratic?

Anyway, here's a much longer record from the same station from NOAA:

And, a graph NOAA uses to evaluate long term trends in the rate of sea level rise, the 50 year means by decade:


“In the space of one hundred and seventy six years the Lower Mississippi has shortened itself two hundred and forty-two miles. That is an average of a trifle over a mile and a third per year. Therefore, any calm person, who is not blind or idiotic, can see that in the Old Oölitic Silurian Period, just a million years ago next November, the Lower Mississippi was upwards of one million three hundred thousand miles long, and stuck out over the Gulf of Mexico like a fishing-pole. And by the same token any person can see that seven hundred and forty-two years from now the Lower Mississippi will be only a mile and three-quarters long, and Cairo [Illinois] and New Orleans will have joined their streets together and be plodding comfortably along under a single mayor and a mutual board of aldermen. There is something fascinating about science. One gets such wholesale returns of conjecture out of such a trifling investment of fact.”