This was not a banner week for the idea that justice is alive and blind in America.

Three separate stories converged to drive home the obvious truth that America has a two-tiered justice system: the Justice Department's decision to not indict the guilty-as-sin plotter Andrew McCabe, the attempt to give Roger Stone an outrageous jail sentence, and the Army's decision to shrug that one of its officers attempted to orchestrate the removal of his commander-in-chief.

Even in the unlikely scenario that the Barr-Durham investigations send the full stable of coup-plotters to jail for decades, it will not erase the obvious fact that it pays to be a Democrat if you are going to commit crimes, particularly if they are political. 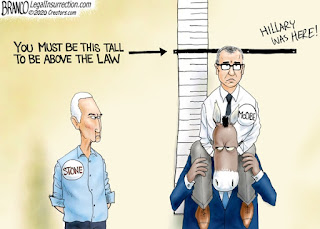 LI: Branco Cartoon – Separate And Unequal, and Adam Mill at AmGreat says Trump Should Keep Shaming the Justice Department on Twitter, but it's hard to shame people who have none. Always seeking the moderate solution, Kurt Schlicter at Town Hall wants to Burn Down the DOJ and Start Over. At some point in the life of a bureaucracy, the desire to keep and maintain power becomes dominant over the desire to perform its delegated job. Justice may be at that point.

From Rick Moran at PJ Media, Andrew Weissmann complains Top Mueller Prosecutor Says DoJ Starting New Investigation Into Comey, McCabe, and Strzok like that's a bad thing. And it probably is for him, since he was in the mix from the beginning. Sundance at CTH shows that  The Washington Post (CIA) is Very Worried About The Big Russia Lie Being Exposed…. and  The Great Lou Dobbs Outlines a Moment The DOJ Went Wrong – Durham, FISC and Barr Seemingly Concur…


Times reporter Katie Benner, trying to make the stunt look like a legitimate grassroots effort, attributed the letter to Protect Democracy, which she described as a “nonprofit legal group.” But Protect Democracy is not an organic activist group spontaneously created by high-minded legal experts alarmed by Trump’s alleged flouting of the rule of law. Protect Democracy was launched in early 2017 as part of an extensive anti-Trump operation managed by a leftwing tech billionaire: Pierre Omidyar, the founder of eBay. This is who is behind Protect Democracy and a number of other nonprofits formed to destroy the president.

Megan Fox at PJ Media passes on from the Dersh,  'Obama Personally Asked the FBI to Investigate Someone on Behalf of George Soros,' Says Alan Dershowitz, meanwhile, via Wombat's In The Mailbox: 02.17.20, from Twitchy, Brian Stelter very concerned with government institutions becoming political weapons. Funny how that works. He didn't care at all in the Obama era.

Chuck Ross at Da Caller notes how McCabe’s Leak Denials Cast Suspicion On His Loyal Aide, Lisa Page. He just let her hang out there; sweet guy that he is. And from Axios, Top NSC official may be moved after "Anonymous" rumor fallout. The NSC is currently a den of snakes. Someone needs to go in and clean house. I know it's being reduced, but probably not enough.

Fuzzy Slippers at LI notes how  Roger Stone Seeks New Trial Amid Juror Bias Controversy, meanwhile Federal judges' association calls emergency meeting after DOJ intervenes in case of Trump ally Roger Stone, so they thinks actually supervising his underlings is a bad thing? A quick answer to the anti-Trumpers at the dispatch, Should Attorney General Barr Resign? No; hell no!

Trying to generate sales, Bolton issues plea that his upcoming book isn't 'suppressed' by White House (CNN) and from Yahoo, Bolton Warns of Possible ‘Censorship’ of His White House Memoir


“I hope it’s not suppressed,” Bolton said Monday in a talk at Duke University in Durham, North Carolina. “This is an effort to write history, and I did it the best I can. We’ll have to see what comes out of the censorship.”

Bolton added later: “I say things in the manuscript about what he said to me,” referring to Trump. “I hope they become public someday. He tweets but I can’t talk about it. How fair is that?”

Bolton said he couldn’t answer a question related to North Korea because it’s also included in his book, which is undergoing pre-publication review by the government. The Trump administration already has raised concern about the manuscript divulging secret information.

And getting ready to roll that ball up the hill again from Jordain Carney on Da Hill, the  Senate braces for fight over impeachment whistleblower testimony, and Democrats Weigh Whether To Pursue New Investigations As Election Looms (WSJ, cited at Hot Air).
Posted by Fritz at 10:57 AM