The U.S. Army Corps of Engineers, Baltimore District will get an extra $18 million from the feds this year, and that means engineers will finally get to finish the Tred Avon River’s oyster sanctuary, as well as work on needed navigation projects.

The $18.225 million boost comes from the Army Civil Works Program, funds earmarked for the U.S. Army Corps of Engineers(USACE) authorized by Congress. The extra funds are in addition to USACE Baltimore District’s $70 million 2020 budget.

$5 million of the added funds will go to oyster restoration in both Maryland and Virginia’s Chesapeake Bay tributaries. The majority of the money will go to finishing the last 40 acres of oyster reef left to be constructed in the Tred Avon River’s 125-acre reef construction project.

So, the majority of $5 million (call it $3 million) will be spread out on one 40 acre site in Maryland. And just how valuable are the oysters? Here's the value of Maryland's recent oyster landings: 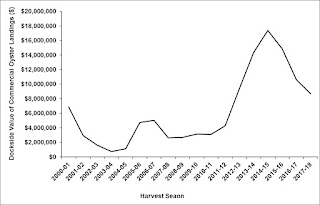 So, in the most recent years, all of Maryland's oyster harvest is worth about $9 million dollars. A significant chunk of the value of the total harvest's value. Which would be OK, if the oysters there were actually protected, and allowed to spread. But we know they won't. Once the oysters become well established there and reach minimum size, watermen will beg to be allowed to harvest them, some claiming the beds "need" oystering to clear the mud. And in the meantime, they may well be poached on foggy days.


Work on the Tred Avon reef has been stopped since 2017, the last time the project got an influx of funding. USACE, the Maryland Department of Natural Resources, NOAA, and the Oyster Recovery Partnership have been building one-foot reefs using mixed-shell materials and rock quarried in Havre de Grace. The Tred Avon is one of ten Chesapeake Bay tributaries targeted for full oyster restoration by 2025 in the Chesapeake Bay Program’s Chesapeake Bay Watershed Agreement. The funding boost is promising news in moving toward that goal.