James Ledbetter at the Western Free Press asserts that Mueller is a Terrorist: Raided Manafort for Documents Already Turned Over


Remember this as they put Manafort deeper and deeper into the “Mueller” scope. Mueller raided Manafort(with guns drawn) for documents he already had. To the logical mind, that is terrorism. What makes Mueller any better than an ISIS thug? Isn’t that how Islamic terrorists behave?

More and more Americans are beginning to see special counsel Robert Mueller’s investigation for what it really is: A desperate last-ditch effort to undermine POTUS Donald Trump’s administration and eventually drive him from office, overturning the results of the 2016 election.

They have no evidence of collusion between the Trump camp and Russia, so they go for the next best thing. They go after the people closest to Trump, hoping that one or two will turn over states evidence and stab Trump in the back. There is only one problem… There was no collusion at all. But Robby Mueller doesn’t want the taxpayers to think he has been wasting time. (Too Late!) 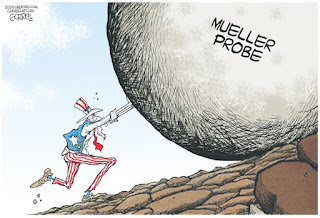 It was done to get pictures of his now famous ostrich jacket and palatial estate that they tried so hard to use at trial. David Voreacos at Bloomberg Manafort Sure Spent Money But Were Those His Offshore Accounts? ". . . prosecutors for Special Counsel Robert Mueller, who charged Manafort with bank and tax fraud, hadn’t provided much direct evidence through Friday to back their claims that he controlled the foreign shell companies that funded those purchases." Rush Limbaugh, What Judge Ellis Is Telling Us at the Manafort Trial


So when I read about the trial and some of the admonitions that the judge, T.S. Ellis, threw out at some of the prosecutors yesterday, it all made perfect sense having read the book and understanding how these people operate. In the Ted Stevens case, for example, one of the prosecutors — well, the prosecution team actually suborned perjury among their star witness. They actually asked their star witness to lie about records involving Ted Stevens and a construction project to upgrade his house or his office or something.

It’s outrageous the stuff that we are assured does not happen. The Department of Justice, the prosecution, already wins 95 percent of its cases. That’s how the deck is stacked against you; if you are a federal defendant, you have a five percent chance of winning. These people don’t have to cheat. They don’t have to suborn perjury. They don’t have to lie about the accused.

And we find some of those same prosecutors in the Mueller team. Ed Brodow, LifeZette: Liberty and Justice for All — All Democrats, That Is! "Trump supporter Paul Manafort gets solitary confinement for doing the same thing done by Clinton supporter Tony Podesta" Mark Tapscott at LifeZette: Three Questions CNN’s Jim Acosta Won’t Dare Ask Special Counsel Robert Mueller


1.) Did Hillary Clinton collude with Russians in 2016? Here are two undisputed facts, Jim, that make this the most important unasked question of the Russia collusion scandal . . . . It was Clinton, not Donald Trump, who paid for opposition research dirt obtained from Russian interests and compiled by former British spy Christopher Steele in a dossier peddled to the Department of Justice, FBI and news media. . .

2.) This is equal justice? Why does Hillary Clinton get a pass — via anti-Trump obsessive FBI agent Peter Strzok’s artful editing — on multiple violations of the Espionage Act with her home-brew email server, while Donald Trump gets a special counsel who, after more than a year, has yet to produce any evidence the president colluded with Russians as she did?

On #3, No; Fusion GPS was a witting Russian tool. Alan Reynolds at IBD: The Disconnected Dots Between Meddling And Collusion. A recitation of well known facts, but a useful reminder of what has been shown, and what has not. Little Marco Rubio: If There Were Evidence of Collusion, 'I Guarantee It Would Have Been Leaked by Now', and a long time Democrat explains How Spygate Is Turning Democrats Like Me Against Our Party


Memo to the left: Know why Trump’s poll numbers have been steady or rising slightly in spite of the invective you’ve been pouring on him every minute of every day? It’s because the economy is booming, and also because most Americans are fair-minded and think that even a flawed sinner like Trump doesn’t deserve to be figuratively kicked every day in a manner that’s often dishonest, exaggerated or out-of-context.
. . .
In effect, their post-election behavior has confirmed that a President Trump was necessary for this time in American politics. The reality is, there was no peaceful transition of power on Jan. 20, 2017. From the time Trump won the Republican nomination, there has been a concerted effort from different quarters – the press, Hollywood, academia, the Democratic Party – to smear and undermine him.

Some of this was legitimate and what naturally happens in an election. But a lot of the opposition to him was breathtaking and unprecedented, and we’ve been learning more as time passes by. The highest levels of the FBI secretly spied on his campaign, and they did it by misleading the FISA court and using an unverified dossier paid for by the Hillary Clinton campaign.

And the unprecedented opposition continued with a fake Russia collusion narrative and a dubious special counsel investigation to undermine and possibly remove a duly elected president elected by the masses whom the establishment happens not to like. If they are successful, we don’t have a constitutional republic anymore, folks. It’s that simple.

Peacock News: Trump says son's Trump Tower meeting with Russians meant to 'get information' on Clinton “This was a meeting to get information on an opponent, totally legal and done all the time in politics — and it went nowhere,”  AP: In a change, Trump says meeting’s purpose was Clinton info. I don't think there's ever been any question that Eric Trump and Jared Kushner were lured into the meeting with the promise of dirt on Clinton. The big question for me is whether the Clinton campaign set it up through Fusion GPS.

Wishcasting at WaPo: Trump at a precarious moment in his presidency: Privately brooding and publicly roaring.

One of these articles is fake news. The trouble is telling which. First: Trump would fight any U.S. special counsel subpoena in court: president's lawyer and Trump inches closer to Mueller interview. Here's what he could be asked

Put on your tin foil hat and grab a rain of salt for this one. Why is Maria Butina in prison? by Gary Gindler at the American Thinker:


If you believe the mass disinformation media, Maria Butina is just another Russian spy. She was arrested the day before Trump and Putin met based on the federal statute of being an "unregistered foreign agent." It seems that the arrest of Butina is the first time anybody has been arrested on this statute in the history of the United States. Although the prison term for the lack of registration of a foreign agent exists (five years), so far, the only punishments have been small fines.

There is every reason to believe that Butina is in prison because a lawyer by the name of Veselnitskaya is at large. These two Russians are not connected by their Russian origin or their suspicious (and suspiciously successful) activities in America. They are connected because of the inexplicable desire of the Obama administration to see both of them on American soil. 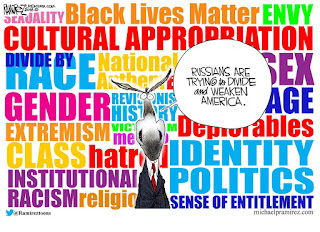 Soon after, Veselnitskaya aggressively began her affairs. She attended hearings in the Senate and sat on the front row immediately behind the former U.S. ambassador to Russia, Michael McFaul. Normally, this seat would be reserved for someone who could understand English. On the eve of her meeting with the Trump team, and right after the meeting, she had dinner with Glenn Simpson – one of the founders of opposition research company Fusion GPS. This firm, as we now know, acted as an intermediary between the Hillary Clinton campaign and the Russian intelligence services for fabricating the infamous "Russian dossier" on Trump.


Now, with Maria Butina, history repeats itself. She, as we know, unlike ordinary Russians, did not have to wait many months to get an American visa. She received her visa very quickly, and it looks as though Obama's secretary of state, John Kerry, helped her. Just like Veselnitskaya, when Maria Butina arrived in the U.S., all doors were opened for her. She met with many senior officials of the Obama administration, became a Life Member of the National Rifle Association, and became the mistress of a well known American political operative.

Like Veselnitskaya, this 29-year-old student participated in congressional hearings, not as a spectator, but as a primary participant. In early 2018, she, for eight hours, voluntarily provided her testimony to the Senate Intelligence Committee.

This did not help her – she was under constant surveillance since her arrival in the U.S. She was not just watched; she was directed by those who needed her to continue her activities in America in 2016.

It looks as though both Veselnitskaya and Butina worked not for Russian intelligence, but rather for American intelligence, which, under Obama's leadership, organized full-scale surveillance of his political opposition during the 2016 election campaign.

Of course, they were kept in the dark. Veselnitskaya and Butina had no idea what kind of work they were doing on behalf of the Obama administration. Their potential handlers in Moscow also suspected nothing. As a result, Obama's FBI used Veselnitskaya and Butina to the greatest extent possible. By the way, it should be noted here that U.S. intelligence services, which for many decades lagged behind their British, Russian, and Israeli counterparts, still managed to learn a lot. They advanced in both professionalism and corruption.

After the 2016 elections, political power in America had changed, and Trump's FBI arrested Butina. However, embarrassingly for the FBI, Veselnitskaya managed to leave the U.S. in time.

I hadn't heard that Veselnitskaya skipped out ahead of the FBI, and if so, it's news to Google. It's interesting that the Obama admin had a prominent role in bringing in both Russian lady spies.
Posted by Fritz at 9:49 AM