I got to discard about half of yesterdays accumulated Russiagate articles as events overtook the older articles about mistrials and what not. The first half of the big news, of course, is than a NoVa jury convicted Paul Manafort of 8 of 18 accusations, and hung on the remaining 10: Manafort convicted on 8 counts; mistrial declared on 10 other charges


A federal jury in Virginia convicted Paul Manafort, President Donald Trump's former campaign chairman, on eight felony counts on Tuesday, but the judge declared a mistrial on the 10 other charges he faced.

What does this have to do with Russia? Nothing, of course, although you will be told otherwise. Americans don't like people who cheat on their taxes (except when it's themselves or their friends, of course), since that leaves us all with the greater burden. Now Manafort faces similar charges in a D.C. federal court. Will Trump pardon him? Not if he's smart.


Former longtime Trump attorney Michael Cohen pleaded guilty Tuesday to eight counts — including two campaign finance violations involving payments to silence women he believed could be detrimental to the 2016 presidential campaign. Cohen testified in federal court, according to his lawyer, that Donald Trump himself directed Cohen to commit a crime.

Cohen's sentencing is scheduled for Dec. 12, with bail set at $500,0000. The government calculates he should spend between 51 and 63 months in prison.


Federal prosecutors claimed Cohen concealed more than $4 million from the IRS and, in 2016, made $280,000 in payments to two women who planned to speak publicly about their affairs with a "presidential candidate."

Deputy U.S. attorney Robert Khuzami said in a statement outside the courthouse that Cohen sought reimbursement for the payments from the candidate's company. Khuzami called that a "sham." Khuzami declined to name the candidate — but court documents describe "Individual-1" as someone "who at that point had become the president of the United States."

Since a candidate is entitled to spend as much money on his campaign as he would like, and paying hush or blackmail money (or as the government calls it non-disclosure agreements when they make people sign them) is legal, the crime is Cohen making the payments, even though he was reimbursed after the fact. Since a lawyer's job is to advise his client how not to break the law, I would expect this all rests on Cohen, as much as people will squawk about it. Remember, John Edwards was found innocent of this "crime."

Trump is Not Trying to Silence Brennan, He's Using Him as a Political Foil

Did Brennan Admit to Using Reverse Targeting to Spy on the Trump Campaign? | The Epoch Times 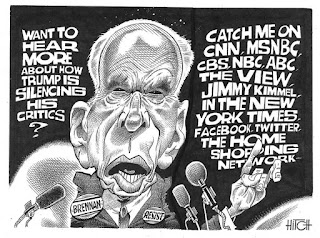 It's Not Just CIA's Brennan: No Former Spy Should Have Access To Nation's Secrets

Why the Rage at Trump for Revoking Brennan's Security Clearance? | Faster, Please! 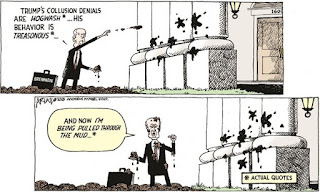 Is Rinat Akhmetshin the ‘Former Russian Intelligence Officer’ Who Was a Source for the Steele Dossier? | The Epoch Times

Trump says about Russia probe: "I could run it if I want" - Hot Air

In The Mailbox: 08.21.18 : The Other McCain for Legal Insurrection:   Manafort Found Guilty On Eight Counts (Related To Bank, Tax Fraud), Mistrial on Ten Others