So that's $280 a pound? That doesn't sound like much of a bargain to me


Using a computer model to calculate the project’s water-quality impacts, researchers from the Virginia Institute of Marine Science and the University of Maryland Center for Environmental Science estimate that Harris Creek’s restored reefs are soaking up about 100,000 pounds of nitrogen annually that otherwise would be adding to the Bay’s pollution woes.

Of course, it's a computer model, where they get to pick the input parameters that feed the model.


“We’re taking a lot of pollution out of the Bay through these oysters,” said Mark Bryer, Chesapeake Bay program director for The Nature Conservancy, which funded the report along with the Oyster Recovery Partnership. “And, presuming these oysters continue to do well over time, they’ll continue to provide that benefit.”

Despite the big nitrogen number, the reefs are producing only a modest improvement in water quality in the creek, a tidal tributary of the Choptank River on the Eastern Shore. That’s because pollution is washing into the creek from the Bay almost as fast as the reefs can filter it. But this report shows the value of doing more such large-scale reef projects, Bryer said.

Over the past seven years, federal and state agencies have planted nearly 2.5 billion hatchery-spawned spat, or baby oysters, on 350 acres of restored reefs in the creek. Advocates say such large-scale undertakings are the best hope for reviving the Chesapeake’s depleted oyster population, which has dwindled to 1 or 2 percent of historic levels through decades of overharvesting, disease and pollution.

So lets compare that to what the Bay program has called the 6 most effective methods of reducing nitrogen: 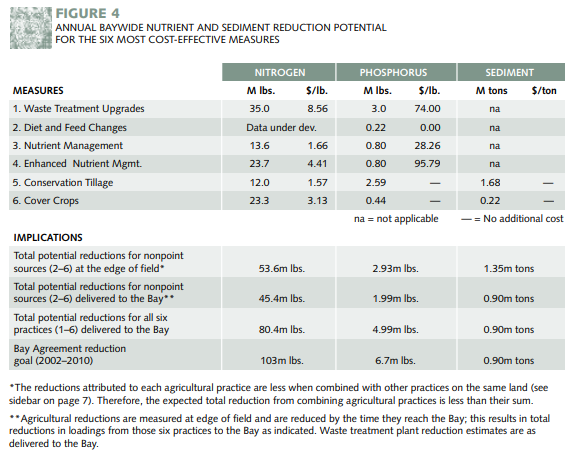 I'm not saying we shouldn't save the oysters, but I'm not convinced, based on this study, that the oysters will turn out to be what saves the bay from pollution.
Posted by Fritz at 6:27 PM