I guess this a appropriate since The Meg movie just came out. I got this article off Facebook, from the fossil group I follow, and occasionally contribute to: Rare dolphin fossils found to be mega-tooth snack

I've met Godfrey a few times at the museum, and at fossil talks. Good guy. 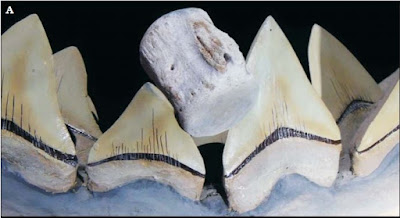 Megalodon was the largest predator that lived on Earth 2-20 million years ago. It is estimated that they attained lengths of between 50-60 feet. From time-to-time, fossil whale and dolphin bones are found along Calvert Cliffs that show megalodon tooth bite marks. Some of these tooth marks may have been made as megalodon scavenged an already dead whale. But the fossil dolphin tail bones suggest that the megalodon-tooth gouge marks were made by these giant sharks chasing down prehistoric dolphins and disabling them by biting deeply into their tails. 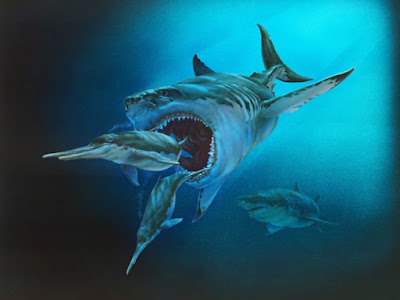 Modern great white sharks are known to disable dolphins by biting their tails. Megalodon could certainly have done the same, as the fossil tail vertebrae show multiple gouges. This suggests that the tails of these dolphins were jammed forcefully and repeatedly between adjacent teeth by powerful bite forces. Powerful and repeated biting seems more in keeping with the disabling of struggling prey, rather than the dismembering of a relatively small dolphin carcass so close to its tail fluke. Therefore, these megalodon-bitten dolphin tail bones suggest that this apex predator included this disabling tactic in its predatory repertoire, and that it also actively preyed upon relatively small marine animals.

Over the years we've found a small pile of whale and dolphin vertebrae in our beach ramblings. Most of them have been thrown into a corner somewhere. I guess I need to to look at some of them for signs of Megalodon predation.