From Sundance at CTH, Suspicions Confirmed: Congress Gets Bruce Ohr Documents Showing “Back Door” Communication Network… Bruce Ohr continued to feed "The Steele Dossier" even after the FBI shut him out for breaking their rules.

According to Chuck Ross reporting: “Congress recently got a trove of Bruce Ohr emails which include exchanges with Chris Steele and others. Source says emails show that Ohr is more significant player in dossier component of FBI/DOJ investigation than originally thought.”

Additionally, John Soloman has an article at The Hill detailing some of the released communication – SEE HERE. Solomon is also saying he will post the leaked documents shortly.


(The Hill) […] They show Bruce Ohr had contact with Steele in the days just before the FBI opened its Trump-Russia probe in summer 2016, and then engaged Steele as a “confidential human source” (CHS) assisting in that probe.
They also confirm that Ohr later became a critical conduit of continuing information from Steele after the FBI ended the Brit’s role as an informant.
“B, doubtless a sad and crazy day for you re- SY,” Steele texted Ohr on Jan. 31, 2017, referencing President Trump’s firing of Sally Yates for insubordination.
Steele’s FBI relationship had been terminated about three months earlier. The bureau concluded on Nov. 1, 2016, that he leaked information to the news media and was “not suitable for use” as a confidential source, memos show.
The FBI specifically instructed Steele that he could no longer “operate to obtain any intelligence whatsoever on behalf of the FBI,” those memos show.
Yet, Steele asked Ohr in the Jan. 31 text exchange if he could continue to help feed information to the FBI: “Just want to check you are OK, still in the situ and able to help locally as discussed, along with your Bureau colleagues.”
“I’m still here and able to help as discussed,” Ohr texted back. “I’ll let you know if that changes.”
Steele replied, “If you end up out though, I really need another (bureau?) contact point/number who is briefed. We can’t allow our guy to be forced to go back home. It would be disastrous.” Investigators are trying to determine who Steele was referring to. (read more) 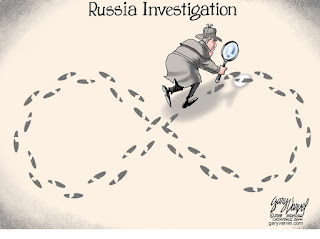 As far as I Wikipedia knows, Bruce Ohr is still working at DOJ, although he has been demoted. Referring to DOJ, CIA and DNI, Victor Davis Hanson asserts that The Police Were Not Policed. In response, Stephen Green at Insty asks How can Americans now trust the intelligence agencies shown to be corrupt in the very recent past?

Eric Felton at the Weekly Standard Dossier Author Steele Suddenly Mum in the Face of Lawsuits. When challenged for libel in a London court for defamation, his defense is not that what he wrote is the truth (which, shockingly is not a valid defense in the UK), but rather that he expected it to remain secret, which is odd given that he handed it out to a wide variety of media in an attempt to get it out into the public.

George Neumayr, Da 'Murican Spectator: Who Hired Stefan Halper? "It appears that Brennan and Strzok hired this bumptious fraud based on the recommendation of British intelligence."


TAS has spoken to old colleagues of Halper and they describe him as “bumptious,” a “blowhard,” and an avaricious fraud who entered the Deep State through a door opened by his father-in-law at the CIA, Ray Cline. After Halper behaved foolishly during the 1980 Reagan campaign, he tried to get a job in the new administration. But initially he couldn’t; Reagan aides had sized him up as a jackass. Halper persisted and eventually nabbed a phony-baloney position in the State Department.
. . .
British intelligence, which had been keeping a close eye on Trumpworld since the summer of 2015, likely encouraged Brennan and Strzok to use Halper in order to entrap Page and George Papadopoulos. After all, Halper was over there anyways and could use his Cambridge gig as a cover. Moreover, by encouraging the CIA and FBI to use Halper, who was already in their orbit, the Brits could participate in the outcome of the election more directly. It is obvious that the same Trump Derangement Syndrome gripping Brennan and Strzok also infected the British government. It didn’t want Trump to win and thereby deepen what it saw as a post-Brexit pit. Christopher Steele, the former British spy whom Hillary hired to defame Trump, was running around with his hair on fire about Brexit’s passage and the prospect of a Trump presidency, according to the New Yorker’s Jane Mayer.

Out of this hysteria came a Brennan-Brit spy campaign desperate to catch the Trump campaign out in collusion. According to Chuck Ross’s reporting in the Daily Caller, Halper grew more and more exasperated as his efforts to pump Papadopoulos for information failed. Halper even had his secretary, Azra Turk, try to use her feminine wiles on the minor campaign volunteer in the hopes of coaxing him into a damning admission.


House Intelligence Committee Chairman Devin Nunes (R-Calif.) said on Monday that there is exculpatory evidence in classified documents regarding former Trump campaign adviser Carter Page that the FBI should have included in its FISA applications and those documents still need to be declassified.

Nunes appeared on Fox News's "Hannity" Monday evening to discuss the latest developments in the FISA abuse scandal. He and other Republicans have been pressing President Trump to declassify 20 pages of the FBI's FISA warrant so the American people can see it for themselves. The congressman said on Fox News last week that the American people would be shocked by what is in those 20 redacted pages.

He also told Hannity that Bruce Ohr, a former top official at the Department of Justice, will become a "more and more important" figure in what has become known as SpyGate, and urged investigative journalists to start digging into his role in the Obama era scandal.

Sara Carter: DC Court Orders DOJ to Preserve Comey Emails. How much do you want to bet they're already bleachbitted, or at least heavily pruned. Musical interlude.

Will be joining my buds on @NewDay tomorrow with a live hit from #SturgisRally
Here’s a taste. pic.twitter.com/L9RIPOqyl4
— Bill Weir (@BillWeirCNN) August 6, 2018


In court yesterday, Rick Gates was having a little trouble remembering how much money he stole from Paul Manafort, WaPo: Rick Gates forced to admit extramarital affair as Manafort’s defense team attacks his credibility:


Gates also admitted he embezzled from Manafort. When Downing asked whether he stole as much as $3 million, Gates replied that he thought the figure was lower but agreed that he had taken money from Manafort without his permission.

In his testimony Monday, Gates said he embezzled hundreds of thousands of dollars while working for Manafort.
. . .
Downing presented Gates with a document showing money transfers conducted between 2010 and 2014, some of them large dollar amounts out of Cypriot accounts where Manafort kept his money. Gates acknowledged the list included “unauthorized transfers,” but he could not specify which ones.

At one point, Gates said the document lacked enough detail for him to offer better answers. But the line of questioning prompted him to say repeatedly that he did not recall the money transfers in question, transactions, Downing claimed, about which the special counsel had previously asked Gates. Downing said Gates’s memory appeared much clearer when it was a prosecutor asking questions.

“Have they confronted you with so many lies you can’t remember any of it?” Downing asked.

As you might expect WaPo makes more of how mean the the defense is for pushing him on his affair, rather than his being unable to remember the illegal transactions he conducted, for which he blames Manafort (after 20 hours of prosecution coaching). As near as I can make out, the defense is making a case, that at least to a reasonable doubt, that Rick Gates engineered the scheme of taking the money stashed (legally) overseas, and bringing it back as loans, so he could skim to maintain his two-woman life style. This, my friends, is why you buy the best lawyer you can afford.


Gee, I wonder why? Rudy Giuliani told the Washington Post’s Robert Costa that Donald Trump’s legal team is about to draft an RSVP in the negative to Robert Mueller — at least as far as one particular topic goes. It’s no coincidence that it’s the topic most dependent on an admission from Trump:


“We have a real reluctance about allowing any questions about obstruction,” Giuliani said in an interview with The Washington Post when asked about the overarching theme of the letter.
He said he and other Trump lawyers have been discussing the details of a draft version of the letter in recent days and hope to send it to Mueller “sometime on Tuesday or Wednesday.”
Giuliani said he expects the letter to “continue the negotiations” rather than formally decline Mueller’s request.
“The president still hasn’t made a decision, and we’re not going to make a final decision just yet,” he said.
Allahpundit and I have both explained this ad nauseam, but it’s worth repeating: there is no good legal reason for Trump to answer questions about obstruction — at least from what we know of the investigation at this stage. So far, Trump has not been accused of doing anything outside of his authority in regard to the Russia probe. Trump had the authority to fire James Comey; he has the right to express his opinions about the conduct of the investigation, too. He has not shut it down, although technically that decision lies within his authority as well.

The talk of obstruction is bullshit. Comey deserved to be fired for any number of reasons. If even one of his reasons is valid, the ill intent on any others is irrelevant, except to Mueller.

.@Judgenap: When the government wants to talk to you, Mr. President, it’s to help the government, it’s not to help you. Trump should not speak with Mueller pic.twitter.com/DjsqwanqSq
— FOX & friends (@foxandfriends) August 7, 2018


Breaking News, Crooked New York Lawyer Accused of Being Crooked! At the paywalled WSJ: Former Trump Lawyer Michael Cohen Under Investigation for Tax Fraud  - As legal pressures mount, Cohen’s bank loans are also under scrutiny by prosecutors. But no one would care except as a means to get to Trump.
Posted by Fritz at 10:32 AM