The headline stack on top of this morning’s Drudge Report:


UPDATE: Trump Tower meeting with Russians WAS meant to 'get information' on Hillary...'I did not know about it!'Trump would fight any special counsel subpoena...WASH POST: Precarious moment in presidency...

Since Sunday, I’ve been watching CNN (so you don’t have to) and they’re 24/7 wall-to-wall on this, as might be expected. Whenever they bring on “analysts” to comment on the story, there is never anyone to present the pro-Trump side of the argument, i.e., that this whole thing was a set-up, a “honey trap” orchestrated by Fusion GPS, which was working for the DNC and the Hillary Clinton campaign. Furthermore, the way this Trump Tower meeting became public knowledge was that the Obama administration had obtained warrants to conduct surveillance of the Trump campaign based on the phone Steele dossier, which was commissioned by Fusion GPS with money supplied by Democrats.

This is what I explained last month:


Natalia Veselnitskaya was thick as thieves with Glenn Simpson of Fusion GPS, and it seems safe to conclude she was an agent-provocateur, hired to lure Trump campaign officials into a meeting which could then be used as “proof” that Trump was a Putin stooge.
Because Fusion GPS was working for the Clinton campaign, and because Fusion GPS also produced the phony Steele dossier that was apparently the main “evidence” used to get a FISA warrant to launch federal surveillance of Trump campaign officials, the obvious 2+2 conclusion is that Veselnitskaya was part of a set-up, a trap, a “sting.” Her assignment, we may suppose, was to get Trump campaign officials to say something that could be captured via surveillance to serve as “proof” that the Republican candidate was doing something illegal with Russians.

Nothing reported in the past month has changed these facts. All that we have learned is that Trump, as might be expected, didn’t want to admit that his campaign got suckered into this Democrat-rigged trap.

Ace: Media, Democrats, and NeverTrumpers (But I Repeat Myself Thrice) Now Freaking Out That Trump "Admitted" Don Jr. Took Meeting to Hear Dirt on Hillary


Here's a headline on the fair and balanced Yahoo, from the HuffPo:

Oh? He admitted he "colluded"? Sort of like Hillary Clinton colluded with Russia by paying off KGB (well, FSB) agents for Putin-approved dirt on Trump? . . . Nice Deb has a good write-up.


The only problem with the news was that it was not news. The president had said precisely the same thing a year earlier. Trump had long ago, and in no uncertain terms, acknowledged that the proposed purpose of the meeting was for the Russians and Russian-Americans to offer dirt on Clinton.

On July 13, 2017, not long after the story broke, Trump, at a news conference in Paris with French President Emmanuel Macron, described the Trump Tower meeting as an opportunity to receive "opposition research" on Clinton.

But Adam Schiff is still peddling the same old schiff: Adam Schiff: 'Plenty of evidence' of Trump-Russia collusion or conspiracy 'in plain sight'. But he really didn't have any.

Yesterday was Rick Gates turn in the witness chair, and what a delight he was: Manafort's right-hand man testifies against him in tax fraud case. While he testified that Manafort had committed tax fraud, he also admitted to embezzling from Manafort, and being the actual hands on the finances in question.

"We didn't report the income or the foreign bank accounts," Gates told jurors, noting that he knew he and Manafort were committing crimes each time.

Under questioning from prosecutors, Gates read off the names of more than a dozen shell companies he and Manafort set up in Cyprus, St. Vincent and the Grenadines and the United Kingdom to stash the proceeds of Ukrainian political consulting work. Asked whether the money in the accounts was Manafort's income, Gates said, "it was."

Gates said he repeatedly lied to conceal the bank accounts and, at Manafort's direction, he would classify money that came in as either a loan or income to reduce Manafort's tax burden.

Mueller has left him little choice but to sing against Manafort, and a lot of reasons to make that song as ugly as possible. Not a terribly credible witness without corroboration,  IMHO. The judge in the case, Ellis, continued to pound on the prosecution to keep to the topic at hand: Manafort prosecutors, Judge Ellis engage in 10-minute courtroom spat


U.S. District Judge T.S. Ellis III specifically pushed Andres on why the prosecution was moving slowly with Rick Gates – the former Manafort business partner who testified on Monday – and specifically to describe the link between wealthy Ukrainian politicos and Manafort. Ellis argued that the connection was not the basis of the case. “What matters are the allegations that he made money from them and didn’t report it,” Ellis said. “You don't need to throw mud at these people.”“I don’t know if they are bad or good. And I don’t care,” Ellis argued, reiterating his previous claim that the prosecution seemed to be focusing not on the actual charges but on what he considered “political contributions.”

Ellis again compared the Ukrainians in question to American billionaires and “Mr. Koch and Mr. Soros” as political contributors. “I don’t know why you keep bringing (up) these people,” Andres said, referring to the Ukrainians. “These people are not like any Americans. These people are oligarchs and that means they control a segment of the economy based on the governments allowing them to do that.”’ “These are not really political contributions,” he continued. “They are self-serving payments with respect to what oligarchs do.”

“That makes it even clearer to me that it doesn’t have anything to do with the allegations in this case,” Ellis responded. “It throws dirt on these people. They may deserve it. I don’t know - and I don’t care.”

At another point in the exchange Andres could be heard challenging Ellis on a technicality. “Respectively, judge, that is not what the law is,” Andres responded bluntly at one point.

The most heated moment of the debate, however, took place when Ellis got perturbed by Andres not looking up at him while speaking. “Look at me! Don’t look down,” Ellis demanded.Then, when Andres responded that he was looking at a relevant document, the exchange grew testier.

Erik Larson at Bloomberg:  Mueller Gets ‘Firewall’ for U.S.-Secrets Review in a Russia Case


The U.S. judge overseeing Special Counsel Robert Mueller’s criminal case against Russians accused of interfering in the 2016 election agreed to appoint an independent lawyer to review pretrial evidence for possible national security issues before giving it to a Kremlin-linked defendant.

Mueller’s team had argued that if Prigozhin gains access to “sensitive” evidence, he could use it to thwart U.S. efforts to “prevent his continuing criminal activity in Russia and elsewhere” outside the U.S. Prigozhin, who provides food services to the Kremlin, is known as Putin’s chef. He and his company are among three firms and 13 people accused of producing propaganda at a Russian troll factory to whip up political strife in the U.S.

Which is why most espionage cases don't go to trial.


Kristin Davis, the "Manhattan Madam" who says she provided prostitutes to New York's rich and famous, is scheduled to testify before special counsel Robert Mueller's grand jury in Washington this week, according to a person with knowledge of the matter.

Davis declined to comment. Her lawyer could not immediately be reached for comment.
Davis, 41, told NBC News in July that someone in Mueller's office called her attorney to ask her to speak to investigators, and that she believed it was because of her ties to former Donald Trump adviser Roger Stone. She also said she had no knowledge of Russian collusion. 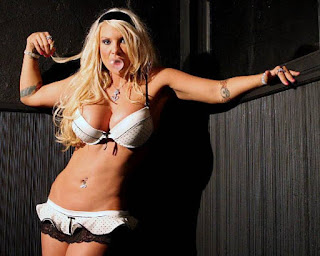 It's pretty naive of her to think that's all Mueller is after. And I doubt she's that naive.

In a statement to NBC News last week, Stone said: "Kristin Davis is a long-time friend and associate of mine. She is a brilliant businesswoman who paid her debt to society and remade her life. … She knows nothing about alleged Russian collusion, WikiLeaks collaboration or any other impropriety related to the 2016 election which I thought was the subject of this probe. … I am highly confident she will testify truthfully if called upon to do so."
. . .
Davis said at the time she didn't have any information about why she was contacted. Her then-attorney Daniel Hochheiser did not respond to a request for comment. "It's very out-of-the blue for me, very upsetting," Davis said. "For them to come to me for information on Russian collusion — I don't have anything on that."

However, Davis said, she had worked for Stone for many years, and other people who worked with Stone had already been subpoenaed. "I’ve been with Roger since 2010 doing web design and writing position papers," she said.

As the Manhattan Madam, she played a role in the downfall of Elliot Spitzer, one time Manhattan prosecutor and New York governor. While getting at Stone seems to be his primary goal, does Mueller have a grudge against her for enabling Spitzer's fall from grace? Prosecutors sticking together and all.

An astonishing interview with @DevinNunes , where he gives us a 'heads up' on the imminent release of unredacted FISA 'and other corrobor . . .


Nunes reveals that the House Intel Committee GOP members have asked for the 4th (and last renewed FISA) to be declassified by POTUS Trump. This makes sense:

3. Rule 13(a) of the FISC Procedure Rules requires the government to inform the relevant FISC judge in writing, if it discovers that a submission previously made to the court contains a material misstatement or omission.

4. Rule 13 (b) requires the government to file a Disclosure of Non-Compliance if the relevant application has breached the FISA Act

It's reasonable to assume that rule 13 will have been breached by the FBI/DOJ crooks. 4 times.

Expect Rosenstein to go to the mat over that.


Also, Nunes suggests that Fusion GPS was being PAID by the FSB/Putin.

That's new - we know they were being funded by Clinton, suspect also the Obama 4 America & the FBI.

But Putin's FSB? If true, WOW.

Discussion on "new" info revealed about Clinton servers & "successor server. But pretty much a recitation of all the crimes she committed with her bathroom server, and mishandling classified data.