OK, I Don't Worry Much About Being Conquered by Guna Yala 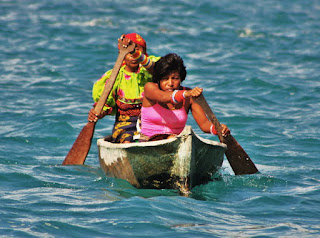 Guna Yala, the Islands Where Women Make the Rules:


This is Guna Yala, also known as San Blas: an archipelago off Panama’s eastern coast that contains more than 300 islands, 49 of which are inhabited by the indigenous Guna people. More than 50,000 strong, the Gunas still live as their ancestors did, dwelling in small wooden shacks covered with palm leaves, with logs smouldering in the fireplaces and hammocks representing the only furniture.

Guna Yala is extraordinary in many ways: it is an autonomous indigenous territory, and its flag sports a black, left-facing swastika, said to represent the four directions and the creation of the world. But perhaps the most curious tradition in Guna Yala is its natural gender equality – and complete tolerance, if not celebration, of gender fluidity.

“My mother taught me how to make these beautiful molas, our traditional embroidered clothes,” Lisa said, showing me her amazing needlework. “Some of these represent birds and animals, but some are very powerful – they will protect you from evil spirits,” she added, smiling softly.

For an onlooker like me, there isn't anything unusual about Lisa. Much like many other Guna women, she’s sitting in her small dug-out canoe and offering her beautiful handicrafts to tourist boats. Except Lisa was born a boy. In a society where women are the main food distributors, property owners and decision makers, boys may choose to become Omeggid, literally ‘like a woman’, where they act and work like other females in the community. 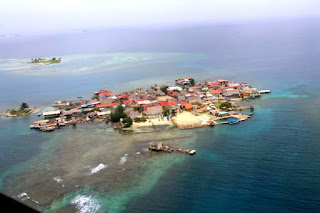 This ‘third gender’ is a completely normal phenomenon on the islands. If a boy begins showing a tendency towards acting ‘female’, the family naturally accepts and allows him to grow up as such. Very often, Omeggid will learn a skill that is typically associated with women; for example, most Omeggid living on the islands become masters at crafting the most intricate molas. . . .

Curiously, in a matriarchal society, there doesn't seem to be much emphasis on possible female to male transgenders.
Posted by Fritz at 8:12 PM