I'm starting out with this piece from Sharyl Attkisson at Da Hill: What would the intelligence community's 'insurance policy' against Trump look like?. I found it tough to find a good quote until I saw Althouse's:

"Strategies would encompass politics, the courts, opposition research and the media. He’d have to become mired in lawsuits, distracted by allegations, riddled with calls for impeachment, hounded by investigations. His election must be portrayed as the illegitimate result of a criminal or un-American conspiracy.... Once Trump is in office, a good insurance policy would call for neutralizing the advisers seen as most threatening, including his attorney general. The reigning FBI director could privately send the implicit message that as long as Trump minds his own business, he won’t be named as a target. When the president asks the FBI director to lift the cloud and tell the public their president isn’t under investigation, the FBI director could demur and allow a storm of innuendo to build. Idle chatter benefits the plot. There would be rampant media leaks, both true and false, but none of them would benefit Trump. All would be well unless the president removes the FBI director. Then, a rider on the insurance policy would kick in...."


Fusion GPS founder Glenn Simpson — paid by Hillary Clinton’s campaign to find dirt on her GOP rival — met secretly with [then-Associate Deputy Attorney General Bruce Ohr], right after Trump won the 2016 election. And all of it was captured in the official’s handwritten notes — a contemporaneous record that intelligence professionals tell me exposes the flaws plaguing the early Russia collusion case....

Early on, Ohr’s notes detail, the conversation focused on a theory apparently offered by Simpson that revolving Trump team members — former campaign chairman Paul Manafort, followed by informal adviser Carter Page, then personal lawyer Michael Cohen — forged a secret channel with Moscow to hijack the election. All three men long have been cited in the Russia investigation; each denies any coordination with Russia. But Ohr’s notes are the first to quote Simpson as suggesting the three essentially were shark-tooth spies who replaced each other in a secret plot....

The Ohr interview and many other now-public actions in the Russia collusion case are “breaking every protocol at the fundamental level of intelligence gathering,” one highly decorated intelligence professional told me.... 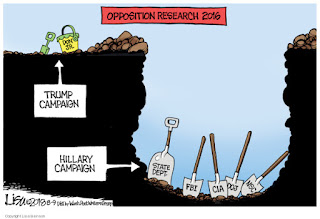 Sundance at CTH tries to tie several threads together in: More Communication Between Chris Steele and Bruce Ohr is “Leaked”?….


There’s something about the construct of these releases that just doesn’t pass the proverbial sniff test. John Solomon –SEE HERE– Sara Carter –SEE HERE– and Byron York –SEE HERE– each writing articles from what appears to be the same sourcing and reference framework; however, each being very opaque in describing their sourcing and context.

The transparent lack of providing the sourcing context (who is providing the information/documents and why are they providing it), for their seemingly coordinated articles has the historic hallmark of controlled narrative distribution. I’ll come back to that…. for now, let’s look at the Solomon release where he provides the documents to support his authorship. Go read it HERE.

The key takeaway within the 2017 communication between Bruce Ohr and Chris Steele, seemingly glossed over amid the granular presentation, is that Christopher Steele viewed Special Counsel Robert Mueller as part of the “small group team.” The fact that Steele viewed Mueller as an extension of the Strzok, Comey, Page and McCabe objective is a rather big deal, yet generally not given much attention.
. . .
Again, the key takeaway here is that Christopher Steele viewed Robert Mueller and the team as allies in an ideological quest…. and throughout 2017 DOJ Bruce Ohr did nothing to dissuade Steele from holding that opinion. Ergo, Robert Mueller is part of the Deep State coup attempt.

Which leads directly to Why It Matters That Christopher Steele Practically Begged To Work With Mueller by J.E. Dyer, The Lid. Read it all. Dr. John at Flopping Aces: Did Christopher Steele work for a Russian oligarch AND Hillary? It would appear so. Sundance at CTH: Oleg’s Story: Yes, The Russians Were Involved in The 2016 Election…


From the emails it appears Steele and Ohr were discussing Deripaska during a period of February to May (ish) of 2016.  This is important context moving forward because this was the period during the presidential primary candidacy of Donald Trump as the GOP nominee was solidified; Trump won.   This is also the period when we know that “contractors” with the FBI were doing unauthorized searches of the NSA and FBI database for opposition research…. this connects to Fusion GPS.

In essence, Christopher Steele was interested in getting Oleg Deripaska a new VISA to enter the U.S.  Steele was very persistent on this endeavor and was soliciting Bruce Ohr for any assistance.  This also sets up a quid-pro-quo probability where the DOJ/FBI agrees to remove travel restrictions on Deripaska in exchange for cooperation on ‘other matters’.

Gee, what other matters? Ace: Fusion Update: The Record Disputes Simpson's Congressional Testimony; Simpson Directed Steele To Talk to the Press in a "Hail Mary Pass," Thus Telling His Employee to Violate the Rules of the FBI He Was Also Working For. At WaEx: Bob Goodlatte to subpoena DOJ, FBI officials and Fusion GPS co-founder. There's a lot of questions that need answering. Ed Morrissey at Hot Air: Graham: Why Didn’t The FBI Warn Trump Like They Warned Feinstein?

BREAKING: Notes from DOJ official Bruce Ohr indicate Steele and Simpson -- aka the Clinton campaign -- were also behind the false rumors that Trump created a "secret server" with Russian-based Alfa Bank through Trump Tower. The hoax sent the FBI on yet another wild goose chase
— Paul Sperry (@paulsperry_) August 10, 2018


Feigning objectivity, I bring you Flynn, Comey, and Mueller: What Trump Knew and When He Knew It by Murray Waas at the NYRB:


Previously undisclosed evidence in the possession of Special Counsel Robert Mueller—including highly confidential White House records and testimony by some of President Trump’s own top aides—provides some of the strongest evidence to date implicating the president of the United States in an obstruction of justice. Several people who have reviewed a portion of this evidence say that, based on what they know, they believe it is now all but inevitable that the special counsel will complete a confidential report presenting evidence that President Trump violated the law. Deputy Attorney General Rod Rosenstein, who oversees the special counsel’s work, would then decide on turning over that report to Congress for the House of Representatives to consider whether to instigate impeachment proceedings.

The central incident in the case that the president obstructed justice was provided by former FBI Director James B. Comey, who testified that Trump pressed Comey, in a private Oval Office meeting on February 14, 2017, to shut down an FBI criminal investigation of Trump’s former national security adviser, Lt. Gen. Michael Flynn. “I hope you can see your way clear to letting this go, to letting Flynn go,” Comey has testified the president told him.

Trump would have been fully within his rights to pardon Flynn on the spot. Gently suggesting they drop the prosecution (which they didn't do at all) is nothing.

From Wombat-socho's "In The Mailbox: 08.10.18", Just One Minute reports the glitch in the Manafort trial: One More 'What Does It Mean' Moment In A Year of Them. "The prosecution was in the bell lap when the judge called a recess, officially until 1:45 but who knows?" Lot's of speculation, no information. Jury problems? Judge berating the prosecution? Bad sushi? Manafort trial judge mysteriously delays testimony, after new Mueller team complaint, The Latest: Manafort prosecutors expect to rest case Monday. The Manafort trial: Day 9


That aide, Andrew Miller, lost a lawsuit earlier this month in U.S. District Court challenging Mueller's subpoena requiring him to appear before a grand jury.

Miller's lawyer, Paul Kamenar, told CNBC in a phone call that Miller refused to comply with the subpoena "in order to be held in contempt and appeal the judge's underlying decision" rejecting his lawsuit.

Outside a Washington federal courthouse on Friday, Miller's attorneys said that they are intentionally challenging the legitimacy of the Russia investigation, specifically regarding Mueller's appointment.

Good luck with that. Mueller is having more luck with the Manhattan Madam, whom he is seeking testimony from for no known reason, although we strongly suspect he's squeezing her, to squeeze Roger Stone, to get goods on the Donald. Mueller Mystery: What Does Eliot Spitzer’s Former Madam Have To Tell A Grand Jury? and  Mystery surrounds former sex-ring operator's Mueller probe role


Whether or not that’s true, Stone is clearly under Mueller’s spotlight. The special counsel’s team of prosecutors has already interviewed longtime Stone colleagues Sam Nunberg and Michael Caputo. Another Stone aide, Andrew Miller, is fighting a Mueller subpoena in court. And on Thursday, MSNBC reported that Mueller’s team is prepared to issue another subpoena to Stone associate Randy Credico, a comedian and former talk radio host who Stone has said was in touch with Assange.

Stone has previously said he is prepared to be indicted, though he insists that if he is, it would be for an "extraneous" business-related infraction unrelated to Russian election meddling.

Stone’s denials of illicit contacts with Russians or with WikiLeaks have come under suspicion given comments he made during the campaign indicating that he'd been in contact with Assange. He later said those contacts were made through Credico, who acted as an intermediary. Stone also acknowledged exchanging Twitter messages with Guccifer 2.0, the nom de plume of a figure who helped disseminate hacked Democratic Party emails in 2016. U.S. intelligence officials say Guccifer 2.0 was a front for Russian intelligence operatives, though Stone has cast doubt on that theory.


A former Ohio State University wrestler is recanting his claims that Ohio Republican Rep. Jim Jordan knew of sexual abuse allegations against a university physician when he coached wrestling at the school over 20 years ago.

“At no time did I ever say or have any direct knowledge that Jim Jordan knew of Dr. Richard Strauss’s inappropriate behavior,” Mark Coleman, a former MMA fighter who wrestled at Ohio State when Jordan coached there, said in a statement.

“I have nothing but respect for Jim Jordan as I have known him for more than 30 years and know him to be of impeccable character.”

He was mean to Hillary, the FBI, and the CIA, and they are out to get him.

Wombat-socho brings us "Rule Five Sunday: Barbi Benton" and "FMJRA 2.0: Talk Dirty To Me" on time and within budget.
Posted by Fritz at 10:47 AM