Continuing to explore the world of Bruce Ohr, and his wife, Nellie. It's much more difficult when leading "news" organizations refuse to cover the story: DEMOCRACY DIES IN DARKNESS, INDEED: @NYTimes and @WashingtonPost Censor Latest #Spygate Revelations

Bruce Ohr was once one of the most powerful officials at the Obama Department of Justice. He reported to Sally Yates, who reported to Attorney General Loretta Lynch.

His downfall began when he became involved in a brazen attempt to fix -- and, later, overturn -- a presidential election.

While the details have been hazy around Ohr's involvement in the attempted coup, we do know he was demoted and reassigned multiple times. He now appears to be in the DOJ equivalent of Siberia. Why?

Ohr, on multiple occasions, met secretly with Christopher Steele and Glenn Simpson, the key figures behind the bogus Russian "Dossier". Furthermore, his wife Nellie was employed by Simpson's company, Fusion GPS, a fact he concealed from the DOJ.

Well, certainly the authors of "Democracy Dies in Darkness" will report on th--....

Also from Bad Blue, this helpful guide to the Russiagate scandal in spreadsheet form: A TIMELINE OF TREASON: How the DNC and FBI Leadership Tried to Fix a Presidential Election [Updated]. Georgia and I were just commenting on how hard it is to keep all the players and times straight. And Da Caller reports Former DEA Agent Says Bruce Ohr ‘Had Other Priorities’


A former agent in charge of the Drug Enforcement Agency’s Special Operations Division called in to the Mark Levin Show Thursday night and wondered if Bruce Ohr prioritized other issues over his previous job as director of the Organized Crime Drug Enforcement Task Force.

The agent, Derek Maltz, detailed to Levin how illicit American businesses were funneling money to terrorist organizations, and that his suspicion was Ohr either sidelined or ignored his responsibility to track these businesses in order to pursue a political agenda against the Donald Trump campaign.

Derailing a presidency is hard work! And as Bruce Ohr is slowly coming to realize “When you strike at a king, you must kill him.” I'm sure we're all looking forward to his testimony before Congress in Aug. 28: Jim Jordan: Bruce Ohr set to appear before Congress later this month. I hope it's open testimony.

Jeff Carlson at themarketswork examines the many Papadopoulos, Mifsud & Manafort Coincidences and suggests that perhaps Papadopoulos was a failed plant and more on the Mysterious Mr. Mifsud:


I don’t have enough information to be certain of anything. But I’m far from convinced that Papadopoulos was simply an innocent victim of events. There are a number of things that bother me about Papadopoulos’ story. Not the least of which is this. Papadopoulos continuously pushed for meetings between Trump Campaign officials and Russian contacts:


10 other items omitted for brevity


The persistence of Papadopoulos has always bothered me. At some point your efforts become counterproductive. How many times do you have to be told “no”.

Papadopoulos was unsuccessful in establishing any meetings between the Trump Campaign and Russian Officials. These ongoing attempts by Papadopoulos feel eerily similar to those made by Joseph Mifsud and Stefan Halper. Use intentionally manufactured meetings and contacts to create perceived associations with Russia.

Papadopoulos met with Mifsud multiple times in the first half of 2016 (more below). Papadopoulos and Mifsud both worked at the London Centre of International Law Practice.

Barbara Jones has deemed 2,558 items to not be privileged nor highly personal given the lawyer-client relationship that once existed between Cohen and the president, per an MSNBC report Thursday.

The materials may now be used by federal prosecutors from the U.S. Attorney's Office for the Southern District of New York as they probe Cohen for possible tax fraud violations related to his taxi medallion business. More than 3.7 million items were seized in April.

The prosecutors are assessing whether Cohen underreported his income from the business in federal tax returns, the Wall Street Journal reported Tuesday. Authorities are also investigating if Cohen was allowed to apply for loans through Sterling National Bank without providing necessary documentation, the report said.


In a political scene unthinkable just months ago, Avenatti was the closing speaker at the Democratic Wing Ding in Clear Lake, Iowa, a traditional stop for presidential hopefuls. His remarks came after a tour through the early-voting state that included a visit to the state fair and meetings with key Democratic officials.

"What I fear for this Democratic Party that I love is that we have a tendency to bring nail clippers to gunfights," Avenatti told an enthusiastic crowd in the Surf Ballroom and Museum. "Tonight I want to suggest a different course. I believe that the Democratic Party must be a party that fights fire with fire." 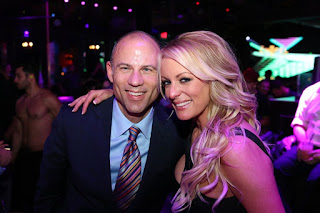 Or is that fire with smut?

It was a reversal of former First Lady Michelle Obama's declaration at the 2016 Democratic Convention, "When they go low, we go high."

In an interview, Avenatti said: "At that point in time, for what she was speaking about, I think that was the right message. But as we sit here now, that approach clearly will not work."

Wombat-socho brings us "Rule Five Sunday: Barbi Benton" and "FMJRA 2.0: Talk Dirty To Me" on time and within budget.