Mueller continues to roil the landscape: Hot Air swipes from NYT: What Will Mueller Do? The Answer Might Lie In A By-The-Book Past. You mean like covering up for Whitey Bulger? Former FBI Director Robert Mueller’s History of Cover-Ups. Breitbart: Roger Stone Predicts Mueller Will Indict Donald Trump Jr. on Process Crime. Well it is Stone, but it would be grounds for a pardon. Carl Cannon writes of The damage to the nation that Mueller could do. For Democrats, that's a bonus. It's easier to get elected if the country is in trouble. Mueller creates political division beyond Putin’s wildest dreams, Dr. Tom Borelli, Conservative Review.

Putin must be thrilled to see the divisive political environment in the U.S. highlighted by public harassment of Trump officials, impeachment talk, claims that President Trump committed a crime, and a former head of the CIA attacking the president.

In the end, Putin didn’t need an elaborate scheme to create intense political division in the U.S. All he needed was Mueller to feed the angry Left.

All for the trifling investment in some Facebook ads.

Politico: ‘Sleeper’ case could torpedo Mueller report "It might even keep the special counsel from sending a report to Congress, shaking Democrats’ hopes that such a document could provide the impetus for impeachment proceedings." A tough read and a long shot. The Prosecutors Who Have Declared War on the President "The Office of the U.S. Attorney for the Southern District of New York isn’t done digging into the Trump Organization." Funny how they didn't care until he was elected.

Rush: Mueller Cannot Have Credibility If He Ignores Hillary’s Crimes. We don't need an investigation; we already know she bought dirt from Putin. What we need is the sentencing phase. Peeking out from the WSJ paywall: When Justice Is Partial Mueller is determined to sniff out any wrongdoing he can find—on one side. Kimberley Strassel:


U.S. Attorney Robert Khuzami took a few moments in his Tuesday statement about Michael Cohen’s plea deal to sing neutrality’s praise: “His day of reckoning serves as a reminder that we are a nation of laws, with one set of rules that applies equally to everyone.”

Noble words, and they used to mean something. But a disparity of justice is at the heart of our current crisis of faith in institutions. Americans aren’t outraged that the Federal Bureau of Investigation felt obliged to investigate allegations leveled at campaigns, or that a special counsel is looking at Russian electoral interference. They are instead furious that Lady Justice seems to have it in for only one side.

The country has watched the FBI treat one presidential campaign with kid gloves, the other with informants, warrants and eavesdropping. They’ve seen the Justice Department resist all efforts at accountability, even as it fails to hold its own accountable. And don’t get them started on the one-sided media.

And they are now witnessing unequal treatment in special counsel Robert Mueller’s probe. Yes, the former FBI director deserves credit for smoking out the Russian trolls who interfered in 2016. And one can argue he is obliged to pursue any evidence of criminal acts, even those unrelated to Russia. But what cannot be justified is the one-sided nature of his probe.

Consider Mr. Cohen, the former Trump lawyer who this week pleaded guilty to eight felony charges. Six related to his personal business dealings; the other two involved campaign-finance violations arising from payments to women claiming affairs with Donald Trump. The criminal prosecution of campaign-finance offenses is exceptionally rare (most charges are civil), but let’s take Mr. Khuzami’s word for it when he says Mr. Cohen’s crimes are “particularly significant” because he’s a lawyer who should know better, and also because the payments were for the purpose of “influencing an election” and undermining its “integrity.”

Hillary's lawyer Cheryl Mills should have known better too, but she got immunity right of the bat. Margot Cleveland: Bombshell: FEC Records Indicate Hillary Campaign Illegally Laundered $84 Million. Is that all?


Yet the mainstream media took no notice of last week’s federal court filing that exposes an $84 million money-laundering conspiracy the Democratic National Committee and the Hillary Clinton campaign executed during the 2016 presidential election in violation of federal campaign-finance law.

And don't tell me it wasn't to helo influence an election.But according to the Atlantic, it's Trump Has No Respect For the Law. And at Da Beast: Trump Changed Washington D.C. People Now Stab Each Other in The Front. And I regard that as a step up. NYTish: Sex, Lies, And Presidents. They were for it before they were against it. WaPo: Amid betrayals, Trump's barrier breaks down


Whether the president faces legal peril is not clear, but his presidency is at a precarious point. Recent polls suggest his repeated attacks on Mueller for leading a "witch hunt" have lost their effectiveness. And if the Democrats win a majority in at least one house of Congress in the midterm elections, now less than 10 weeks away, they would gain the power to investigate or even impeach.

Fox News: Liberal media's desperate push for Trump impeachment may actually hurt Democrats. Well it certainly didn't help Republicans with Clinton. Axios: Republicans brace for Democrats' investigation spree after the midterm elections. Give 'em the Hillary, deny, lie and destroy evidence. Allahpundit: Confirmed: No Change (Well, Not Much) To Trump’s Job Approval After Cohen And Manafort Convictions and boy is he pissed.

And the tech giants continue to try to influence US elections: Facebook Censors Articles from Conservative Outlets About Manafort, Cohen and 96 Percent of Google Search Results for 'Trump' News Are from Liberal Media Outlets 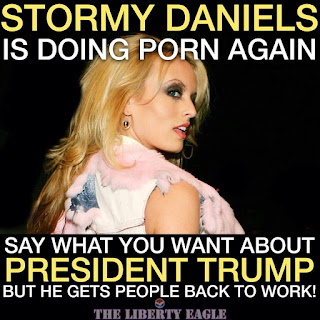 And because no Russiagate compilation feels icky enough without Stormy Daniels: Stormy Daniels vows to TESTIFY about Donald Trump sex deal to Congress despite death threats


Stormy told the Mirror: “If Donald Trump has done things he shouldn’t have during his campaign he should be impeached. If he has broken the law he should be arrested and treated like anyone else.

“I’ll happily testify under oath and prove my story is true.

“I have always said that the truth is the most important thing and that is why I spoke out in the first place – so I can look my daughter in the eye and know I was honest. Now the truth is coming out and justice must be done.”

Stormy, 39, claimed she was initially intimidated into keeping silent and is suing both Trump and Cohen amid claims a non-disclosure agreement she signed is invalid.