It's a big one again, so diving right in with Ace's Judge Tells the FBI That It Will No Longer Be Permitted to Hide Behind "We Can Neither Confirm Nor Deny" Answers, But Must Actually Answer Questions About How It Handled the Alleged Steele Dossier.  No more shuck-and-jive. It's about time. Mark Penn at Da Hill: Press needs to restore its credibility on FBI and Justice Department


Now, these are all established facts. Let’s review them again: Ohr was a senior Justice Department official whose wife was employed by the research firm hired by Clinton and the DNC to get dirt on Trump. This was not reported on any disclosure forms. Ohr’s wife worked on the same Trump-Russia project as Steele, who concocted the dossier, and Ohr himself established a secret back channel with Steele, who had been dismissed for lying to the FBI — all, apparently, so that Steele was never far from learning about the investigation or having input into it. His texts even refer to a fear of “firewalls” being discovered.

This is an absolutely stunning development, suggesting a “deep state” conspiracy hidden even from superiors and driven on the basis of undisclosed dollars ultimately from the opposition candidate going to the wife of a DOJ official. Even moderate senators like Lindsey Graham (R-S.C.) have been shocked by this and called for a special counsel to investigate the FBI. Yet, the mainstream media not only ignores the story while in the throes of Omarosa fever, but suggests only tin-hat conspiracy theorists would believe anything is wrong here.

The New York Times did write a story about Ohr — a story wondering why Ohr would possibly be on a list of people the president has suggested might lose their security clearance. The article says Ohr has been “at the center of a right-wing conspiracy theory” about the origins of the Trump-Russia investigation. Ohr, according to the Times, has been the subject of “conservative attacks” about the origins of the investigation which, the article notes, the Justice Department kept under wraps so as not to affect the election. Yup, they were actually trying to help Trump. 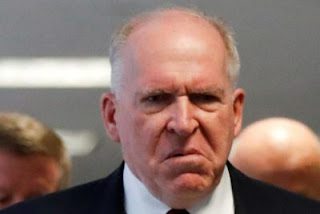 
“Nothing in this town stays classified or secret forever,” Burr said. “And at some point somebody’s going to go back and do a review. And I’d love not to be the one that chaired the committee when somebody says, ‘well, boy, you missed this.’ So we’ve tried to be pretty thorough in how we’ve done it.”

Burr said there is “no factual evidence today that we’ve received” on collusion or conspiracy between Russia and President Donald Trump’s campaign. But he said he’s still open on the issue and hasn’t personally come to any final conclusions, since the investigation isn’t finished.


So the bottom line here is that while Nelson did not make this story up, he did completely botch the handling of it. First and foremost, he was not supposed to reveal this because it was classified. Second, this apparently has to do with potential, ongoing threats from the 2016 penetration of Florida’s election system, not with any new penetration of the system.

On Paul Manafort's Purge Trial, The big media in the Manafort trial are trying to dox the jury. Ace: CNN and Other Media Organizations Plead to Manafort Judge: Please Give Us the Jurors' Names So That We Can Dox Them Into Voting the Way We Demand.


The judge said NFW, citing among other things, the fact that he has been threatened, and needs protection from the Federal Marshall Service: Manafort Trial Judge Has Been Threatened, Has U.S. Marshals Protection (John Sexton, Hot Air), Manafort’s Judge Is Under Federal Protection After Wave Of Threats (Da Caller). Bay way of Wombat Socho's  "In The Mailbox: 08.17.18" Power Line has: Democrats Frighten Manafort Jurors.

Jack Shafer, Politico, John Brennan’s Trumpian Turn, "John O. Brennan can’t say he didn’t ask for President Donald Trump’s extreme attention." Bloomberg: Trump Is Not Trying to Silence Brennan The president’s strategy is the opposite: to make the former CIA director more prominent and use him as a foil. That would be typical. Nice for Brennan to fall for it, though. Dr. John at Flopping Aces, Trump isn’t trying to silence his critics. He’s stripping away security clearances from those who conspired against him. It's an amazing turn of dishonesty that the media et al accuse him of trying to silence critics by merely taking away their right to handle classified information. But we expect no less. Allahpundit: Trump Eager To Strip More People’s Security Clearances "Eager, but probably not so eager that he’ll nuke all of them at once. Gotta save those revocations for rainy-day news cycles." Well, the media set the game to the news cycle, and Trump has to play within those bounds. Besides, never knowing when the hammer will fall is kind of invigorating. Joe Seyton at Reason: Rand Paul: Trump Should Keep Revoking Ex-Obama Officials’ Security Clearances. Rand Paul has his good moments. David Kris at the WaPo has 3 ways revoking Brennan’s clearance is bad for the country. Because it makes it harder for the WaPo to get insider information is not listed.

Natasha Bertrand at da Atlantic gives Peter Strzok another tongue bath: Why the FBI Fired an Agent Who Wrote Anti-Trump Texts "The FBI’s disciplinary office had recommended Peter Strzok be suspended for two months but was overruled by the bureau’s deputy director."


The Former FBI special agent Frank Montoya Jr., who served as the director of the Office of the National Counterintelligence Executive until 2016, acknowledged that Strzok “made a serious mistake” in exchanging those highly opinionated texts with Page. “But it wasn’t a fireable mistake,” he said. “Guys in the bureau get DUI’s and they get 30 days on the bricks.

Allahpundit: Feds Closing In On Michael Cohen Over Stormy Payoff?. It didn't work on John Edwards, but he wasn't a Republican. 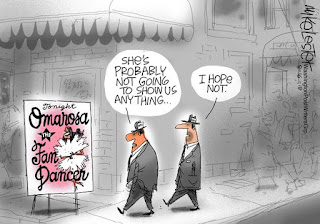 AP source: It’s not just audio, Manigault Newman has video. Looking forward to something like this (NSFW link). And if you need something to displace that from your brain try Piers Morgan Says Omarosa Manigault Offered Him Sex to Win ‘Celebrity Apprentice’


“Omarosa sidled up to me at the New York Mercantile Exchange and said, quite seriously: ‘Piers, do you want a showmance?’ ‘A what?’ I replied. ‘A showmance. You know, a romance on the show — we get it on together. Happens all the time on Apprentice. Everyone has sex together. Then we can make lots of money out of it,’” Morgan wrote. “I stared at her grasping, ferociously ambitious little eyes, and laughed: ‘You must be joking, you deluded woman.’ She didn’t take it well. ‘What are you? Gay?’” 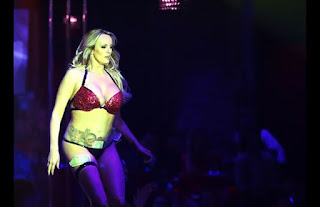 And speaking of grasping, and ferociously ambitious,  Stormy Daniels Reportedly Storms Out Of UK “Big Brother” At Last Minute  over "a last-minute demand for an extra £100,000, which was rebuffed" and How Michael Avenatti Got His Start In Political Dark Arts Under Rahm Emanuel.
Posted by Fritz at 10:49 AM