What's Up With ASMFC?

A missive about Striped Bass management in the near future, by a charter captain who works with the all important  Atlantic States Marine Fisheries Committee.


At the August 2018 Atlantic States Marine Fisheries Commission meeting, here’s what went down

As is the case with most ASMFC meetings, a lot happened. However, in the interest of simplification, we’re going to restrict this summary to what we think is critically important to anglers. 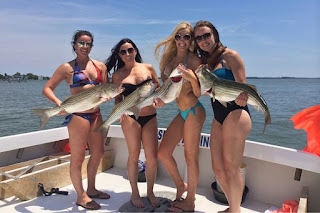 The Striped Bass Board received a 2017 update from ASMFC staff. Worthy of noting here was the drop in harvest (keeper-sized fish) from prior years. Overall harvest in 2017 was down 26% from 2016, while total catch had increased. This absolutely jives with what most of us have seen on the water. A LOT of schoolies and far fewer keeper-sized fish than in prior years. Yes, of course there are bodies of larger fish in some “hot-spots,” but overall, those fish have been conspicuously absent from their regular haunts.

This is significant in the context of the 2011 year class, one of the only good Chesapeake Bay year classes in the last decade and a half. While yes, there was a significant mandated reduction in fishing pressure back in 2015 (25%), managers have, more or less, avoided real constraining measures, hedging on the 2011s to fill in the stock once they recruited into the fishery (became keeper size). Well, they should have recruited by now. So, one would think we’d see an increase in harvest rather than a decrease. 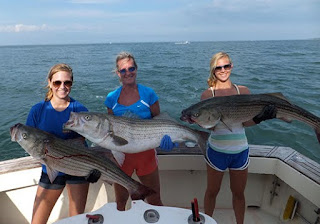 
New York in particular was down more than 60% from 2016, New Jersey was down almost 70%, and Virginia was down more than 50%, which are some of the lowest harvest numbers we’ve seen since the 90’s. Which begs the question, where did all the banner 2011 year class fish go? Was it smaller than we thought, or did we just knock the crap out of them? Either way, this is not good news for anglers. Certainly there are and have been complaints about the lack of striped bass availability this year, and last year, and the year before that. Perhaps managers shouldn’t have put all their money on the 2011s.

Moving on, we were reminded once again about the steady decline in striped bass spawning stock biomass since 2004. While that spawning stock biomass still hasn’t reached a low “threshold” level that indicates an “overfished” stock, it is just a hair over the threshold that was set back in 2003 with Amendment 6. In plain speak, that means it’s pretty darn close to being overfished. 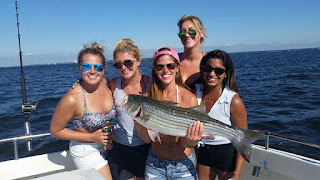 If it were up to me, I'd stay a long way from thresholds since an average fishing year, combined with a bad mortality year from natural causes could produce a disaster.


This is, of course, all cause for concern. But still, the Commission is moving ahead with plans to “relook” at the goals and objectives of the Striped Bass Fishery Management Plan, and is considering/moving forward with plans to tweak (meaning liberalize) both the spawning stock biomass and fishing mortality reference points as part of a 2018 Benchmark Stock Assessment, which is expected to complete peer-review this fall.

To put it simply, what’s happening here is that, because we don’t have all the fish around that we should have – largely because the Chesapeake (the largest producer area on the coast) isn’t putting out the fish that it used to – well, instead of being more conservative and reducing harvest, managers are considering just lowering the bar on the spawning stock biomass reference points, to allow what very well may be an unsustainable harvest to continue. And that sucks…