R is for Russiagate 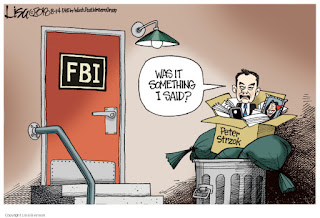 OK, back to the grind. So let's grind a little more on the Peter Strzok firing. I assume that means the  IG has finished extracting any useful information in the probe of their conduct in the various probes, and decided that he can no longer be of use to the agency as a tainted agent or as a source. As for Strzok's no doubt instinctive claim that he is being fired because the President is biased against him, I would echo a blog commenter who I can't remember, who noted how he claimed the IG found no evidence of that IG found no documentary evidence of his acting on his obvious biases in the Clinton email investigation (remember, the Russian probe has yet too drop, and where is that anyway? October surprise?). Sundance at CTH: Jim Jordan Discusses Peter Strzok Firing: “It’s About Time”…. That's not a surprise, but Let’s Face It, Peter Strzok Deserved To Be Fired, Says … House Democrat Eric Swalwell, not exactly a Trump fan.

“I would have fired him, too,” Swalwell said on Bloomberg News. “He has rights as an employee, and those should be exhausted, but I also believe as the brother of police officers and a former prosecutor, with the stakes this high, a presidential candidate being investigated, you can’t talk that way, even if it didn’t affect the investigation.”

Other's on the left, naturally, were more forgiving: Peter Strzok cheated on his wife, got fired, and liberals gave him $250,000 anyway. Thomas Lifson at The American Thinker: In Peter Strzok, Trump-haters have picked a truly repulsive martyr to their cause

There certainly was some serious creepiness slipping out there. Roger L. Simon, PJ Media: Feinstein, Strzok, and the Sinister Russia Probe


One of the salient facts to remember in the wake of the firing (finally!) of Peter Strzok is that the man was the chief of the Counterespionage Section of the FBI. That means the man in charge of counterespionage for the Unites States of America was conducting an extramarital affair with another important Justice Department employee via text messages that could easily have been hacked by a high school student.

Roll that around in your mind for a moment.  Can you think of anything dumber in the intelligence world?  You don't have to have read any of a dozen John le Carré novels to understand how foolhardy it was, how it made Strzok subject to all sorts of skullduggery from foreign powers.  No wonder it took them so long to fire him.  There must have been a lot to investigate besides his ridiculously biased and jejune politics.

Now roll back five years to when it was discovered that Dianne Feinstein's chauffeur of twenty years (!) was a spy for the People's Republic of China. (Well, five years for Dianne.  The rest of us found out only last week.)

How was it possible the then-chair of the Senate Intelligence Committee was under such intimate covert surveillance by China for decades?  Where was our counterespionage on that one? Not doing a lot of countering. . .

Sundance at CTH again: The Media Are Hiding Their Knowledge and Duplicity – Buzzfeed, WaPo and New York Times Had Unredacted FISA Application For Over A Year…


We shared a discussion thread several months ago about how the media are enmeshed within the story of the DOJ and FBI corruption. However, only recently did we discover the media engagements were not just pervasive, they were/are participatory.

As a consequence the same media cannot reasonably report on any aspect of the story without exposing their own duplicity; their only choice is to double down on lies they helped create and promote.

In preparation for explosive developments soon to reach critical mass CTH strongly urges everyone to think carefully about these recently discovered empirical truths:

The media’s role in the DOJ/FBI corruption scandal is not only pervasive, it’s participatory.

If it was going to hurt Trump, and help the Democrats, it would have leaked long ago, ergo . . . 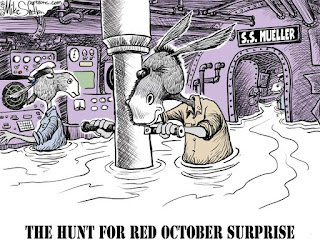 
Rinat Akhmetshin, Russian-born and now a U.S. citizen, is the man hired by law firm BakerHostetler to assist in the defense of Russian Denis Katsyv, the proprietor of Prevezon Holdings who was accused of using New York real estate to launder funds embezzled through the Russian tax-fraud scheme exposed by whistleblower Sergei Magnitsky.

Akhmetshin and Fusion were both contracted for work on the Prevezon defense in U.S. federal court. Fusion’s part was to gin up dirt on William Browder, Sergei’s Magnitsky’s chief advocate in political deliberations by the U.S. government on the Magnitsky allegations. Browder was to be a witness for the prosecution, as an expert on the fund embezzlement in question.

Akhmetshin and attorney Natalia Veselnitskaya, meanwhile, were both involved in setting up the weirdly opaque nonprofit Human Rights Accountability Group International (HRAGI) in the U.S. in early 2016 (my link above). The purpose of HRAGI – purportedly set up independently by Denis Katsyv – was to lobby for amendment of the U.S. Magnitsky Act and reopen the channel between the U.S. and Russia for Americans to adopt Russian children. Vladimir Putin had imposed a moratorium on such adoptions, officially in retaliation for the Magnitsky Act (so named because its purpose is to threaten sanctions against governments that abuse human rights, as the Russians did with Magnitsky).

We have known for more than a year that Fusion GPS and Akhmetshin were connected through the Prevezon defense. We’ve also known for months that both Akhmetshin and Veselnitskaya were present at the Trump Tower meeting on 9 June 2016 with Donald Trump, Jr. At that meeting, Veselnitskaya revealed that her real purpose in requesting the meeting was to talk about relief for Russia from Magnitsky sanctions, and the restart of adoptions. . . . 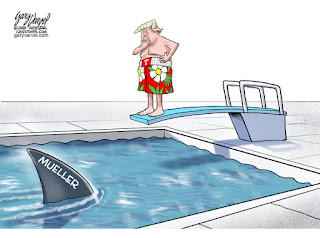 
The woman known as the "Manhattan Madam" for once running a high-end prostitution ring in New York City says she was bullied by Robert Mueller's team when she was forced to testify in front of a grand jury in connection with the Russia investigation.

Kristin Davis said she was forced to answer leading questions on the character of her longtime friend and colleague Roger Stone.

"I left there feeling very sick to my stomach," Davis said in an interview on Fox 5's Good Day New York.

She also says her subpoena was moved up and she was only given four days notice to get to Washington, D.C.

"I basically said 'I don't have child care for a 2-year-old' and they said 'if you can talk to the media you can figure out how to get your son to D.C.'," Davis said.

She said they provided a plane ticket but the charges ended up on her credit card. She's not expecting the government to fully reimburse her for the expenses.

Stone is a longtime friend and supporter of President Trump and his name has been linked to the investigation into possible collusion between the Russian government and the Trump presidential campaign.


Allahpundit: Omarosa: Trump Knew About The Emails Before Wikileaks Released Them. And why would be believe her? She's got a book to sell.

Also on high from Allah: Finally: President Avenatti Releases His Policy Platform. He promises to be the Democrat's Tump.

Wombat-socho brings us "Rule Five Sunday: Barbi Benton" and "FMJRA 2.0: Talk Dirty To Me" on time and within budget.
Posted by Fritz at 8:59 AM