MD Orders Three Power Plants to Clean Up Their Acts


Maryland regulators have decided to make three power plants in the state reduce toxic wastewater discharges by 2020 under a federal regulation that the Trump administration has delayed and indicated it may roll back.

Heeding arguments made by environmental groups and some state lawmakers, the Maryland Department of the Environment gave NRG Energy until Nov. 1, 2020, to meet new limits on the discharges of certain pollutants — including toxic metals like arsenic, mercury and selenium — at its three plants.

The affected generating stations are Morgantown, on the lower Potomac River in Charles County; Chalk Point, on the Patuxent River in Prince George’s County; and Dickerson, also on the Potomac north of the District of Columbia, in Montgomery County. The facilities discharge water that’s been used in their air pollution scrubbers and to flush bottom ash out of their boilers.

In making its final determination on the renewal of the plants’ five-year discharge permits, the MDE backed away from its earlier, tentative decision to give the facilities up to five years before they’d have to curtail the discharges under “effluent limitations guidelines” from the U.S. Environmental Protection Agency.

The EPA finalized those limits in 2015, making them the first federal limits on toxic metals and other harmful pollutants discharged to rivers and streams by coal-burning power plants. Citing technology improvements over the last three decades, the agency required coal plants to install or upgrade wastewater treatment systems or otherwise adjust the plant’s operations to curtail such discharges.


The EPA decreed at that time that the rule would be phased in starting this year, with all plants to be in compliance by 2023. But last year, responding to industry complaints about the rule’s cost, the EPA initially stayed the rule, and then delayed its effective date to 2020 or beyond while the agency considered revisions. Environmental groups sued, and the case is pending in federal appeals court. 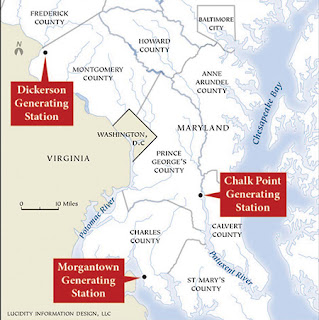 In the face of such uncertainty, the MDE had at first proposed giving the plants the option of complying with the federal rule by November 2020 or delaying until 2023 to await potential changes. Environmental groups, some lawmakers and others had submitted written comments urging the MDE not to wait, citing the impacts such discharges could be having on fish and human health.

In a written response to those comments, the MDE said it never intended to delay implementation of an active regulation. While the EPA rule did allow for granting more time beyond Nov. 1, 2020, the MDE said it had received no proposal from the company specifically arguing that it needed more time to comply. Indeed, the MDE noted that at the Morgantown plant, for instance, the company has already installed an advanced biological treatment system to help it meet the new limits.

I sampled for metals around all three of the power plants mentioned, and didn't find excessive levels of any of the metals mentioned. However, they are all coal fired power plants (although at least Chalk Point is now at least partly natural gas), and produce huge mounds of coal ash.  We would be better off the switch them to gas (or better, nuclear) ASAP.
Posted by Fritz at 7:42 PM