Another “Ship of Fools” gets grounded in Arctic ice, needs rescue


We have another winner! This time in the Arctic.

A few weeks ago I covered this:

Student propaganda cruise to the Arctic to be carried by webcast


From August 23 to Sept. 13, the University of Rhode Island’s Inner Space Center (ISC), with major funding from the U.S. National Science Foundation and additional support from the Heising-Simons Foundation, will conduct the innovative Northwest Passage Project research expedition with a team of natural and social scientists, students, and a professional film crew. This ground-breaking opportunity is also supported by One Ocean Expeditions as a key marine partner, having operated in Arctic waters for over 20 years.
Research to aid understanding of / document climate change effects
Aboard the Akademik Ioffe, the team will collect water, ice, and air samples to advance understanding of and document the effect climate change is having on the environment and biodiversity in the Canadian Arctic Archipelago.
…
The expedition team will engage a wide public audience through an extensive and unprecedented Internet presence from the area, including Facebook Live broadcasts from sea. Special interactive broadcasts will be beamed via the Inner Space Center (ISC), the U.S. facility that supports ocean exploration and education, to three prestigious science museums across the country – the Smithsonian National Museum of Natural History, Washington DC, the Exploratorium, San Francisco CA, and the Alaska SeaLife Center, Seward AK.

Then predictably, this happened according to the Facebook page of the tour company, One Ocean Expeditions Inner Space Center:


On the morning of August 24th, the Akademik Ioffe — the vessel carrying the participants of the National Science Foundation funded Northwest Passage Project being conducted by the University of Rhode Island — became grounded in the western Gulf of Boothia in the Canadian Arctic Archipelago. The ship has since been re-floated, and following a full and successful systems check the vessel has repositioned to anchor. We are happy to report that all passengers, including all Northwest Passage Project participants, are safe and are being well cared for. We will provide updates as we resolve the situation. 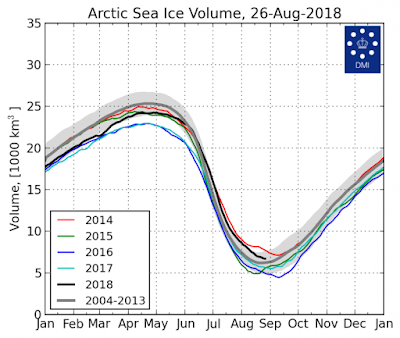 Then the Canadian Coast Guard service had this to say:


Good morning, Due to heavier than normal ice concentrations in the Canadian arctic waters north of 70 degrees, the Canadian Coast Guard, recommends that pleasure craft do not navigate in the Beaufort Sea, Barrow, Peel Sound, Franklin Strait and Prince Regent. CCG icebreakers cannot safely escort pleasure craft. Operators of pleasure craft considering a northwest passage should also consider the risk of having to winter in a safe haven in the Arctic, or in the case of an emergency, be evacuated from beset vessels. Safety of mariners is our primary concern. REGARDS, NORDREG CANADA 181256UTC\LR

And then, comes the familiar evacuation plan:


25 Aug 2018 – KUGAARUK, Nunavut – Cpl. Serge Yelle of the RCMP detachment says he expects between 80 and 90 of the passengers will fly from the remote Arctic coastline community back to Yellowknife.
The Transportation Safety Board is considering whether it will send investigators to the site.
A board spokesman says the ship has suffered some damage.
On its website, the tour operator – One Ocean Expeditions – describes the 117-metre Akademik Ioffe as a “modern, comfortable, safe and ice-strengthened” vessel that can host 96 passengers and 65 staff and crew.

It seems global warming zealots are condemned to repeat the past, over and over again.

If only they’d checked first…per the Canadian Coast Guard report, sea ice volume is above normal, according to DMI:

At least no one was hurt just inconvenienced, a little.Well, I suppose it's good to learn about global warming first hand. But do you suppose they'll really learn? They would if someone sent them the rescue bill.
Posted by Fritz at 2:09 PM