How about Some Refreshing Russiagate?

Fresh donut holes to go with your coffee: Exposed: the Deep State's Authorship and Publication of the Dossier By Clarice Feldman at the American Thinker

To my mind the new star is Yaacov Apelbaum, who, using his considerable technical skills, has produced a masterpiece of well-documented analysis underscoring the nonsensical and partisan nature of the Mueller operation. He compares this effort by the anti-Trumpers to the plot line of the Dreyfus affair, where falsified evidence and suppressed evidence led to  Captain Alfred Dreyfus’s conviction for treason.

It’s lengthy and detailed and on a lovely Sunday in summer you may not want to study it completely, but if this subject is of interest to you, I strongly suggest you bookmark the article and study it at your leisure.  I cannot do it justice in any summary, but I’ll try to hit the main points.

He concludes, after a long, substantive, technologically adept investigation:


The real dossier story is not the scandalous insinuations that it makes, but rather it’s the funding sources, the teams that worked on it, and its compilation and distribution channels. At peak capacity, the dossier team must have consisted of at least 25 individuals who worked on it for over 6-12 months. Assuming a modest $200 per hour rate per person, some first/business class travel and accommodations, media, consulting, IT, and legal services, this project most have cost an upwards of 5-10 million dollars. According to Simpson’s testimony and documents, Fusion GPS was only paid about a million dollars by the DNC and Clinton campaign, which begs the questions of what was Hakluyt’s [Ed: another private UK intelligence operation closely connected to Hillary Clinton] cut and where did the rest of the money go?

For today’s purposes, I will simply note the highlights, but the article really deserves the attention of readers, investigators, and reporters. Using open source intelligence materials, he’s pinpointed the source(s) of the deeply flawed Steele Dossier, which formed the basis for the FISA warrants used by the FBI and Department of Justice to gather intelligence on the President and his associates. . .

That's a lot of cash, but nobody ever accused Hillary of being a piker when it came to buying dirt. She always bought the best. And she had a nearly unlimited budget. Related: 2016 Trump Tower Meeting Looks Increasingly Like a Setup by Russian and Clinton Operatives, by Lee Smith, RealClearInvestigations. I think it's been considered likely for a long time, and we're starting to smell the smoke from the smoking guns. I'll bet the conversation was recorded by Veselnitskaya, but since there's nothing there, it will never see the light of day. Sundance at CTH has More Suspicions Confirmed: Glenn Simpson Lied During Congressional Testimony…


Simpson claimed in testimony to the House Permanent Select Committee on Intelligence on Nov. 14 that he did not have contact with any FBI or DOJ officials regarding the infamous Steele dossier until after the 2016 election. But Ohr’s emails, which have been provided to Congress, show that he and Simpson were in contact as early as August 2016.

[…]  The Washington Examiner reported on Wednesday that Simpson sent an email with the subject line “Can u ring” to Ohr on Aug. 22, 2016. Ohr’s log shows he had contact of some sort with Simpson on that day. (read more)

Allan J. Favish, American Thinker: Declassified: Did Rosenstein Make False Statements to the FISA Judge? Probably, when he signed off on the Page FISA warrant and signed a statement that said, in effect, that the data, which consisted almost solely of the Steele Dossier, had been validated. But it's probably wishful thinking to imagine than he'll be held account. Also. at the WaPo, Dana Milbank is apoplectic about Devin Nunes plans to impeach Rosenstein: The unimpeachable integrity of the Republicans. But then, apoplexy is in his job description.


Paul Manafort may or may not have violated tax and banking laws in 2010. Given the twisted and arcane nature of those laws, who knows?

What we do know is that Manafort first was investigated for breaking those laws in that year by Robert Mueller’s FBI. A discretionary decision was made not to prosecute. It wasn’t a priority of the Obama Administration to indict consultants over how they reported income from foreign governments. If that were a priority, a lot of big shots in Washington would have gone down.

There is insufficient concern that what is broadly called “election tampering” really means efforts to influence voters by legitimate means. It was unnervingly Orwellian when Congress cudgeled Facebook’s founder for selling ads to the highest bidder without first assessing the worthiness of the content. Manafort’s real crime is not that he chose to book certain income as loans from offshore shell companies, because a lot of people do that.

No, Manafort’s crime is the same as Facebook’s: he failed to measure the orthodoxy of his political client’s message and, because of that, he now faces an inquisition.

Michael Ledeen suggests How to Fix the Intelligence Community.


The late Daniel Patrick Moynihan concluded that the only way to get a good intelligence community was to shut down the current CIA and start all over again with entirely (and fewer) new people. A lot of the current analysis can be done by properly vetted professors and think tankers. As for clandestine operations, much can be done by the military as General Flynn wished, and for which he earned the enmity of the IC. As these things are done, we would need greatly improved counterintelligence, as you can see from horror stories about the likes of Senator Dianne Feinstein. I would expect to find a spectacular number of penetrations by hostile foreign agents. 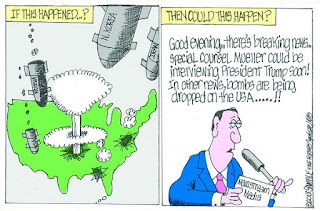 Debra Heine, PJ Media: Conflict of Interest? Mueller's FBI Has a History With Russian Oligarch Oleg Deripaska. So he really knows when collaboration with the Russian oligarchs is bad, right?


Russian oligarch Oleg Deripaska is a name that pops up from time to time in the collusion narrative, though it has been conspicuously absent from Mueller’s indictments. Now, a new report published at The Hill by investigative reporter John Solomon could help explain why: Deripaska has a history of working with Mueller's FBI.

According to Solomon's sources, the Bureau in 2009 asked the oligarch to spend millions of his own dollars to fund an FBI-supervised operation to rescue retired FBI agent Robert Levinson, who was captured in Iran while working for the CIA in 2007. The sources include more than a dozen participants inside and outside the FBI, the Levinson family, a retired agent who supervised the case, Deripaska's lawyer, and Deripaska himself.

“We knew he was paying for his team helping us, and that probably ran into the millions,” a U.S. official involved in the operation confirmed:

FBI officials told Solomon that the mission was hampered by Hillary Clinton's State Department. Deripaska had his visa revoked by the State Department in 2006 amid concerns about his links to organized crime, which he has denied:

Da Caller:  Mark Levin: ‘Robert Mueller Is A Greater Threat To This Republic’ Than Putin. Maybe. I know Putin isn't going to conquer us, but the Deep State already has.

It's almost like the WaPo is telling you who to root for in the Manafort trial: Are there any limits to Paul Manafort’s greed? and How to explain Rick Gates, the almost-sympathetic thief and philanderer

The WaPo would also like to convince you that Don Jr. meeting with Veselnisksaya about Russian orphans is worse than Hillary buying $55 million worth of dirt from the Kremlin through cut outs. Don’t fall for Trump’s latest whataboutism.

Throwing a wrench into the obstruction allegations, 'The president didn't say that!' Rudy Giuliani changes tune on Trump's meeting with James Comey and insists he never asked FBI chief to go easy on Michael Flynn. Who to believe, the Donald or leaker Comey? Tough choice!
Posted by Fritz at 9:34 AM