A late start, and lot of material. In first place: A reminder from Stacy McCain of the curious case of the pro-Trump DoD official whose security clearance was revoked after complaining about Stehan Halper: The ‘Deep State’ Is Real: Whistleblower Punished for Pentagon Spy Complaint and Ace: Wow: Pentagon Analyst Stripped of His Security Clearances After Questioning Exorbitant Contracts for Trump-Campaign Spy Stefan Halper.

Now, onto Brennan: George Neumayr at the Federalist: John Brennan, a Security Risk from the Start. Only a red-diaper baby like Obama would appoint a Gus Hall voter to head the CIA. An IBD editorial: Ex-CIA Chief Brennan's Security Clearance Should Have Been Revoked Long Ago. Melanie Arter CNSNews: Sen. John Kennedy: John Brennan Is ‘a Butthead’ Who Gave Intel Community ‘a Bad Name’. That's one good way to put it. Mark Tapscott at LifeZette: Are These the Five Looniest Liberal Reactions to Brennan Losing His Security Clearance? I dunno, the day is young and it's a high bar. Insty: THE DEEP STATE WHINES BACK: Brennan, Colleagues Say Security Clearance Revocation Intended to ‘Intimidate and Suppress Any Criticism’ of Trump.


What do you suppose would have happened to dissent if the presidential candidate Brennan voted for in 1976 had actually won?

Even Conor Friedsdorf at the Atlantic: A Brief History of the CIA's Unpunished Spying on the Senate. Ann Althouse throws the bullshit flag at: "While I had deep insight into Russian activities during the 2016 election, I now am aware — thanks to the reporting of an open and free press..."  By way of Wombat-socho's "Late Night With In The Mailbox: 08.16.18", Power Line brings us The Brennan Factor, and also Twitchy: Kris Paronto Replies To John Brennan’s Principles Tweet, Leaves Smoking Crater:

My principles are greater than clearances too John, especially when you and the @CIA kool-aid drinkers punished us for not going along with the Benghazi cover-up story in order to protect you, @HillaryClinton ‘s & @BarackObama ‘s failures. You put your politics before us. https://t.co/qWFWujKthL
— Kris Paronto (@KrisParonto) August 16, 2018

Remember @JohnBrennan is many things but he's not an ordinary "critic." His greatest hits include misleading Senate intel Democrats about his CIA "spying" on Congress- and "got away with it." He's now a TV news analyst. https://t.co/xWweLZ8W7L https://t.co/M3t3cZEiBr
— Sharyl Attkisson (@SharylAttkisson) August 16, 2018

"Silencing" @JohnBrennan would mean -- well-- making it where he couldn't be a TV personality or removing him from Twitter and social media or hitting him with an injunction. I don't think that's happened (nor should it). He isn't silenced.
— Sharyl Attkisson (@SharylAttkisson) August 16, 2018


On Bruce and Nellie Ohr, The WaPo's Glenn Kessler goes from ignoring him to whitewashing him in one swift move: Who is Bruce Ohr and why does Trump keep tweeting about him?


Ohr exists in a netherworld — a subject of fascination in right-leaning media, barely a mention in mainstream media. His name last appeared in the pages of The Washington Post in February, and yet President Trump keeps tweeting about him. White House press secretary Sarah Huckabee Sanders, in announcing that Trump had revoked the security clearance of former CIA director John Brennan, listed the names of other people who also faced revocation of clearances.

Bruce Ohr could be out of a job if Trump strips his security clearance by Gabby Morrongiello, WaEx. Let him clean toilets. Adam Mill at Da Federalist: Bruce Ohr May Have Broken More Than The Law By Pushing His Wife’s Opposition Research To The FBI: Looks like it to me.


The law prohibits public officials from involvement in matters in which their spouse has a financial interest. The question is, Did Ohr “personally and substantially” participate in a particular matter in which his spouse had a “financial interest” while he was employed by the Justice Department as the assistant attorney general? Let’s take a closer look.

Kimberly Strassel, at the unfortunately paywalled WSJ, cited by Insty:  What Was Bruce Ohr Doing?


The Federal Bureau of Investigation and Justice Department have continued to insist they did nothing wrong in their Trump-Russia investigation. This week should finally bring an end to that claim, given the clear evidence of malfeasance via the use of Bruce Ohr.

Mr. Ohr was until last year associate deputy attorney general. He began feeding information to the FBI from dossier author Christopher Steele in late 2016—after the FBI had terminated Mr. Steele as a confidential informant for violating the bureau’s rules. He also collected dirt from Glenn Simpson, cofounder of Fusion GPS, the opposition-research firm that worked for Hillary Clinton’s campaign and employed Mr. Steele. Altogether, the FBI pumped Mr. Ohr for information at least a dozen times, debriefs that remain in classified 302 forms.

All the while, Mr. Ohr failed to disclose on financial forms that his wife, Nellie, worked alongside Mr. Steele in 2016, getting paid by Mr. Simpson for anti-Trump research. The Justice Department has now turned over Ohr documents to Congress that show how deeply tied up he was with the Clinton crew—with dozens of emails, calls, meetings and notes that describe his interactions and what he collected.

Mr. Ohr’s conduct is itself deeply troubling. He was acting as a witness (via FBI interviews) in a case being overseen by a Justice Department in which he held a very senior position. He appears to have concealed this role from at least some superiors, since Deputy Attorney General Rod Rosenstein testified that he’d been unaware of Mr. Ohr’s intermediary status.

Lawyers meanwhile note that it is a crime for a federal official to participate in any government matter in which he has a financial interest. Fusion’s bank records presumably show Nellie Ohr, and by extension her husband, benefiting from the Trump opposition research that Mr. Ohr continued to pass to the FBI. The Justice Department declined to comment.

The Washington Post gives Peter Strzok a tongue bath in: ‘You stepped in it here’: How anti-Trump texts ruined the career of the FBI’s go-to agent


Many people who worked with Strzok over the years said they did not know what his partisan leanings were until the messages emerged. But even supporters acknowledge his reputation might have sustained a fatal wound from his texts about people he was investigating, on a work phone, to a woman with whom he was having an affair.

“I never saw the political side that’s in his texts, and I mean that,” said Robert Anderson, a former FBI executive who worked with Strzok. “However, I also told him to his face since this happened, ‘Look, I love you, brother, but you stepped in it here.’ ”

Howie Carr at the Boston Herald: Peter Strzok drank that dirty water "Just one link in chain of corruption out of Boston FBI office" Where they protected murderers.


But it’s true, and of all the horrible, slimy, sleaziest agents to come out of Boston, Strzok may be the worst. The others just wanted to take bribes and booze from gangsters, and maybe kill one or two “rats” who crossed their underworld paymasters.

Strzok, on the other hand, wanted an “insurance policy” to fix the 2016 presidential election, even though he knew that when it came to crimes by Donald Trump, “there is no there there.” 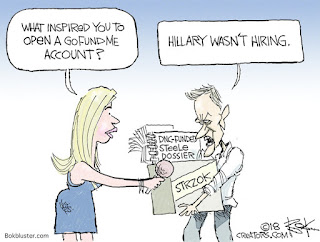 Roger Kimball at the Spectator: We knew Peter Strzok was gutless. His begging reveals that he’s shameless, too "Everyman’s guide to success and riches in the FBI. 1. Join the bureau. 2. Do bad stuff and get fired. 3. Hit the jackpot."


An interesting question. In the science world we are accustomed to thinking in terms probabilities. We tend to accept a 5% chance or less (2 sigma) of being wrong as acceptable for ordinary work, although physicists in the particle world often insist on 5 sigma to be extra sure. What chance should be acceptable to put a man in jail for the rest of his life on false charges. I would think that should be way less than 1% (3 sigma). But how do you define the probabilities in a jury trial? How do you get 12 people to agree?

James Hill at ABC: What happens if Mueller decides to subpoena President Trump? It goes all the way to the Supreme Court. Every Single Person Who’s Challenged Mueller’s Authority Has Lost
by Matt Naham at Law and Crime. Never say never.
Posted by Fritz at 1:19 PM